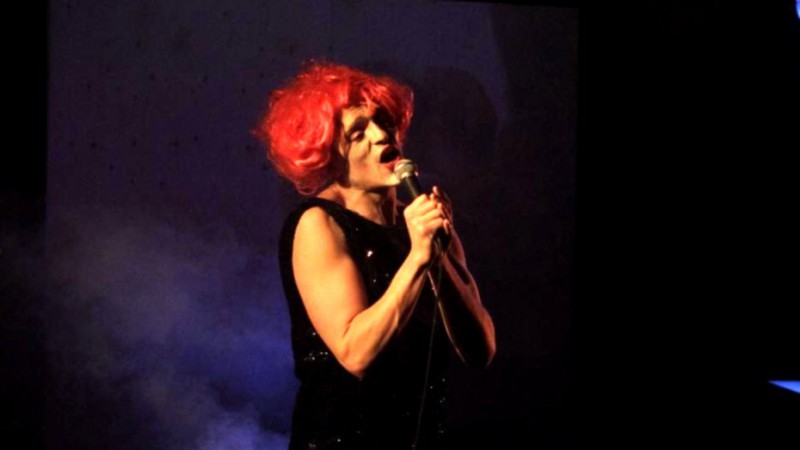 A man buried in popcorn. A piñata in the shape of a pill. A home built with protest posters. A man blowing balloons into clusters of pink cells on his hands. Each is an exhibit exploring the AIDS crisis in a eccentric tribute called (More) Propositions for the AIDS Museum.

The bilingual show, on this week at Théâtre la Chapelle, is the second chapter in a multi-year exploration of the AIDS crisis by interdisciplinary/queer/feminist troupe Projet Hybris.

Director Philippe Dumaine uses his profession as an art historian by applying a research lens to the art and activism of the crisis in the ‘80s and ‘90s, when the ravages of the virus and its precursor, HIV, were being slowly understood. Facing silence, discrimination and sluggish government help, activists fought for greater support and transparency for the queer community.

Dumaine says the 30 vignettes in (M)PFTAM are “impressions” of the era designed to touch your sense. “I wanted [the audience’s interpretation] to be as complex as the crisis is,” he says.

“I wouldn’t say that the show in its entirety is documentary. Our practice is more about digesting what’s already out there about AIDS. So we went through a lot of books about AIDS, and also movies, documentaries and visual arts,” says Dumaine.

The nine artists line a floor of black marble tiles, watching each other perform in turn. One surprisingly dark and funny skit has a female dancer puts on something like a mummer’s costume, with a hodgepodge of elements like bells, fake fur and a hood. She sways until she whips off the top and starts to describe the deathly symbolisms of the costume, each metaphor more elaborate than the last, her voice growing more agitated as she zealously tries to incorporate every piece of AIDS activism she’s ever seen.

In another skit, a man exhorts Justin Trudeau (who opened an AIDS conference in Montreal last fall) to improve the court system’s treatment of people with HIV. The audience is encouraged to cheer along with pastel pompoms.

Each night, a different guest is invited to the stage to share their memories. On Monday, I caught Jean-Pierre Routy, a doctor the immunology unit at the Royal Victoria Hospital who has written a book about his experience as a healer in the crisis. Activist Puelo Deir, writer Anne Golden and performer and documentarian Atif “Trannietronic” Siddiqi are expected as guests, as well.

There are flashes of beauty, comedy and emotion, but as some walkouts pointed out, the show strains with its length and more oddball elements, like a rap sequence and drag queen’s slow show prep.

The first iteration of the show, simply titled Propositions for the AIDS Museum, was performed to three sell-out crowds at Théâtre aux écuries as part of the Phénomena Festival.

Director Dumaine, whose interest in the AIDS crisis was sparked by getting involved with the pink bloc of the 2012 student protests in Quebec, said this first look was focused on New York City. That’s where radical activist group AIDS Coalition to Unleash Power (ACT UP) was founded in 1987. This week’s show looks more at Montreal as a flashpoint for the AIDS crisis, especially during one conference in the late ‘80s, where protesters fought to have patients included in the conversation.

Does this flurry of artistic interpretations successfully ignite the memory of the AIDS crisis? I would like to know the thoughts of someone who experienced it firsthand. But for myself, (M)PFTAM had my fingers whipping to Google to learn more. ■