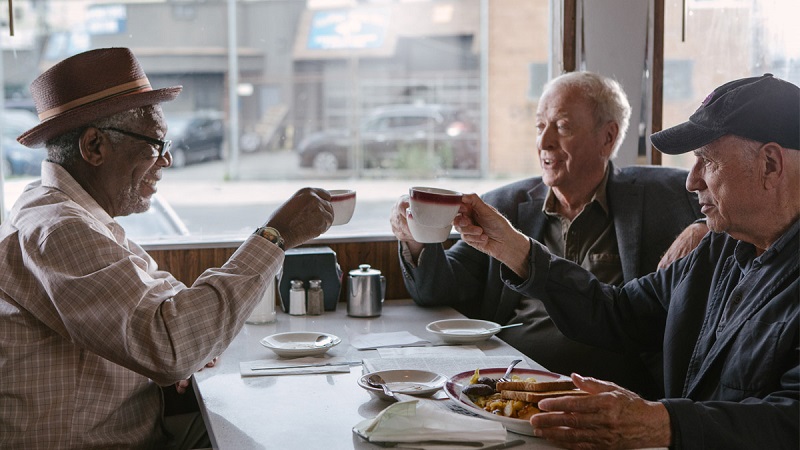 Not too many actors in Hollywood history have continued working well into their 80s. There certainly haven’t been many octogenarians getting top billing in studio comedies until the last decade or so.

Actors who once contented themselves with taking sixth-billed grandparent roles and doing a TV movie here or there are still going at it stronger than ever, and as audiences age along with them, studios have settled on a particular brand of old-guy comedies that are popping up like clockwork. Certainly, they keep people like Morgan Freeman and Alan Arkin working — both of them have already appeared in movies with loglines not unlike this one, in roles fairly similar to the ones they play here.

Part of the reason why Going in Style feels instantly familiar is because it’s based on a 1979 movie that basically pioneered the old-men-cut-loose genre. The new version’s script (by Theodore Melfi, who wrote and directed Hidden Figures) sands the edges off the original (inasmuch as a George Burns movie can have edges) and adds some timely social commentary about the financial crisis, but it otherwise sits very much in that same mold as films like Last Vegas, The Maiden Heist, Grudge Match or even The Bucket List: silly, feel-good comedies that are almost entirely about letting their iconic stars do what they do best. Call it a comedic riff on the Expendables, if you want. It’s a tired formula in a lot of ways, but everyone here does try their darnedest.

Joe (Michael Caine) is a retired Brooklyn steelworker who barely scrapes by on his pension when the company decides to terminate all American activities, effectively cancelling the pensions of himself and his buddies Willie (Morgan Freeman) and Al’s (Alan Arkin). Dead broke and facing repossession of his house, Joe is inspired by a bank robbery he witnesses to rob the bank with his friends. After all, what’s life in prison when you’re 85?

The three hook up with a moonlighting pet shop owner (John Ortiz) and devise a plan that will net them just the amount that their pensions are worth in the best case scenario, with no one hurting but the insurance companies in the long run.

There are complications, of course, but none that really threaten the sunny and upbeat tone that settles in from the very beginning. Going in Style may have the smallest stakes of any heist film in history — although Braff whips out the split-screen and montages set to old-school hip hop at every opportunity, the protagonists of Going in Style never really feel like they’re in much danger. That’s kind of the appeal of a movie like this, mind you: have the aged protagonists joke constantly about how little time they have left, but keep it a joke.

It wouldn’t be a stretch to assume that everyone from Braff to Matt Dillon (who plays the cop on their case) to (potential) audiences are showing up to this for the purpose of spending two hours with some screen legends in goof-off mode. None of the three principals are stretching their wings too much here, content to stick to their usual tricks: British stoicism for Caine, twinkle-eyed mischief for Freeman and generalized aggravation for Arkin. Obviously, you won’t find too many people with more experience at being these three things, and Going in Style slips on like a well-worn pair of favourite slippers.

One of the smartest things the filmmakers do here is severely minimize the amount of time spent gawking at seniors reacting to the newfangled world around them. Braff and Melfi spare us all by avoiding set pieces revolving around the characters figuring out how to use an iPad or being subjected to the horrors of dubstep. While we are treated to an extended scene of the protagonists watching the Bachelorette, they seem as deeply invested as a gaggle of women in an Anna Kendrick rom-com might be — we’re a fair ways away from the LMFAO guys waving their balls around in Last Vegas. Braff does, however, work poor Christopher Lloyd to the bone as a senile pal of the protagonists. Though a fairly expendable tertiary character, Lloyd chews through the scenery unabashedly in his few scenes, bulldozing through dialogue with cartoonish goggle-eyed abandon.

It’s difficult to come down hard on either side of Going in Style — a genial, unassuming comedy triggers mostly genial, unassuming reactions. There’s interesting shading going on, Braff keeps it moving in the tradition of the best bank robbery movies (though showing the characters literally watching Dog Day Afternoon is a little on-the-nose), but it’s really all about the stars. I have this sort of morbid paranoia every time a pallid-looking comedy starring a veteran actor pops up on the horizon — what if this is their last movie? What if the entirety of their oeuvre finds itself reduced to this? (I presumably care more about this than most of these people — Gene Hackman retired after Welcome to Mooseport, voluntarily ensuring that his last movie would also be one of his most forgettable.) While I wouldn’t dare suggest that this is anyone’s last film (the three leads are, in fact, extremely productive), it would be fine if it were. Going in Style is that kind of movie.■

Going In Style opens in theatres on Friday, April 7. Watch the trailer here: