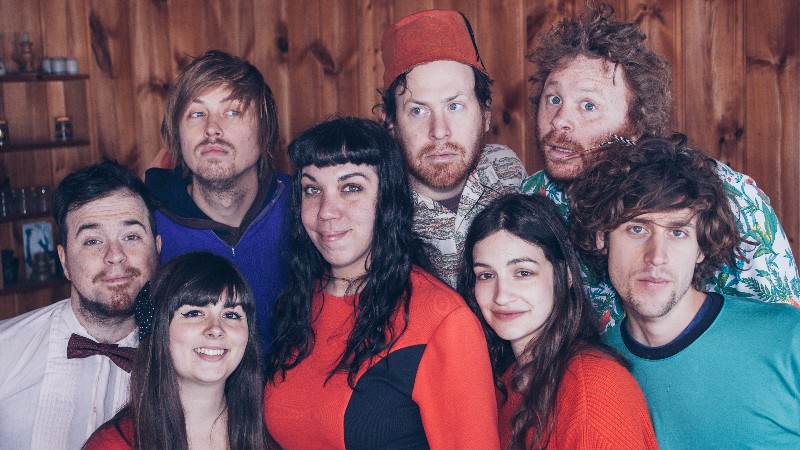 A lot of big bands seem to keep growing and growing in size, but for the Cajun-folk-punks in Canailles, whose new album Backflips is out this Friday, April 28, focusing the band meant limiting themselves a little.

“At first we were five, we were just in a park jamming, but soon we needed a bass and drum player,” says singer and instrumentalist Erik Evans. “It was a bit of a sacrifice but when we became serious we decided it had to be eight — everyone just put their heart into it.”

It wasn’t long until the band moved indoors and realized they had something truly powerful on their hands. “The chemistry of the band and the sound when we were all together on stage just gave us the answer we needed to continue,” said Evans. “We have an accordion player, a banjo, guitar and mandolin, so we can’t afford to lose a member. Usually it’s more of adding an instrument like violin, so we’ve had 15 on stage at times.”

Needless to say with their huge numbers, their shows are a force of nature, with the energy between them and the crowd creating a frantic feedback loop. “Every show that we do and whenever we’re on stage in front of people, the fact that we’re a lot of people and we’re having fun while performing on stage gives the public energy,” says Evans. “We take our energy from them, so it’s a sharing thing to get the party feeling we want.”

Like any good party, however, this has gotten out of hand several times. “There was a show at Parc LaFontaine, someone was dancing on the stairs and she fell and broke her teeth,” says Evans. “Not the kind of thing we want to see but we like to see people having fun and it gets really crazy, people drink so it can happen.”

Translating that live feeling to the record had been an issue for the band on previous recordings, however, which led to a much more in-the-room method for this record. “On the other albums we’d record the voices apart, and it didn’t sound real, but on this album it does,” says Evans. “We were all in the same room: drums, vocals and everyone at the same time. It’s a good way to work.”

Producer Tonio Morin Vargas brought the same attitude towards their live recording, with enough tough love to shape their record the right way. “We’re usually pretty stubborn about our music but we listen to him when he says ‘Oh at that point you don’t have to do that’ or ‘That part’s really shitty, you should take it out,’” said Evans. “He brought good ideas and at some point he was even playing, too.”

Other friends who came along for Backflips include Mélisande Archambault and members of les Deuxluxes. “Mélisande is one of our friends and we wanted to add violins, and she did something really amazing,” says Evans. “Anna’s (les Deuxluxes) a really good singer, and on ‘Genoux’ we really wanted to add eight voices and she made the chart for all the vocals so everyone was in harmony.”

After all their time together and years down the road from their days in a park, it’s a much tighter unit live and in the studio. “We’ve been together for seven years, the chemistry is really solid now and the fact that we spend three quarters of our year inside a tiny van, it affects our way of creating songs,” says Evans. “Usually when we go to create an album we go to a cabin by the water and spend a week together without computers or phones, so there’s people playing, writing and we put everything together.”

With their album release show this week, the band will be bringing the same fury that rocked 10,000 Polish punks and brought them to play on a volcano in the Indian Ocean. “People went crazy, it’s hard to explain what happened, I saw people dancing, holding hands en masse,” says Evans. ■