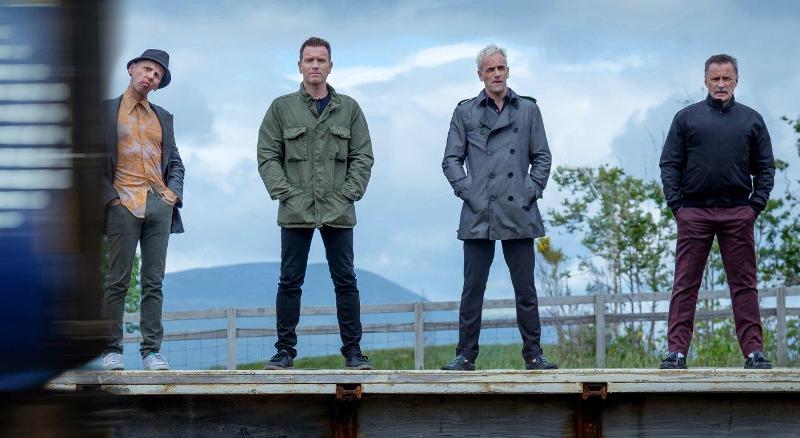 The loud, thumping soundtrack, the unforgivingly clever dialogue, that charming handful of drug-addled Scots and Danny Boyle’s breakneck vision of a junkie’s Edinburgh — what was not to love about Trainspotting? Twenty years later, Boyle and his original cast of lads are giving it another go, each having aged in varying degrees of hot daddy-ness.

The film greets its audience with the familiar riffs of Iggy Pop’s “Lust for Life” — a remix courtesy of Prodigy blasts while Mark Renton (Ewan McGregor) runs on a treadmill. After a heart attack leaves him crumpled on the gym floor, he travels back to Edinburgh to recuperate and reunite with the friends he betrayed: Simon “Sick Boy” (Jonny Lee Miller), Spud (Ewen Bremner) and the still delightfully violent Begbie (Robert Carlyle). Sick Boy has replaced skag with loads of cocaine and prostitution blackmail scams, Spud is a still-struggling junkie trying to maintain a relationship with his estranged family and Begbie is boiling up in prison, dreaming of revenge.

During an interview on Chris Hardwick’s Nerdist podcast, Boyle shared that he never defined Trainspotting as a film about drugs, but more one about boyhood, which makes T2 a film about manhood, the kind crippled with the doubt and regrets of middle age. There are still traces of that pulsating, youthful abandon found in the first film, but added to it are uncertainty and a whole lot of nostalgia — a nostalgia Boyle constantly accentuates with faux-archival footage of the men as boys and, of course, scenes from the 1996 movie.

It’s not a completely flawless venture. Even though she serves as the voice of reason, the addition of a sexy Bulgarian prostitute (Anjela Nedyalkova) as a sidekick doesn’t seem necessary, especially since the women of yore (Kelly Macdonald’s Diane and Shirley Henderson’s Gail) are seen, albeit briefly. It also begins to drag on a bit in length, no matter how many visual tricks Boyle reverts to. This being said, there are enough incredibly great moments — namely a scene in a Protestant bar, the return of Renton to his family home and Begbie and Renton’s reunion in a nightclub bathroom — to make it a strong and smart sequel. It even kinda leaves you hoping to meet these guys once more further down the road, at 60 or 70 and still so desperately trying to “Choose Life.” ■