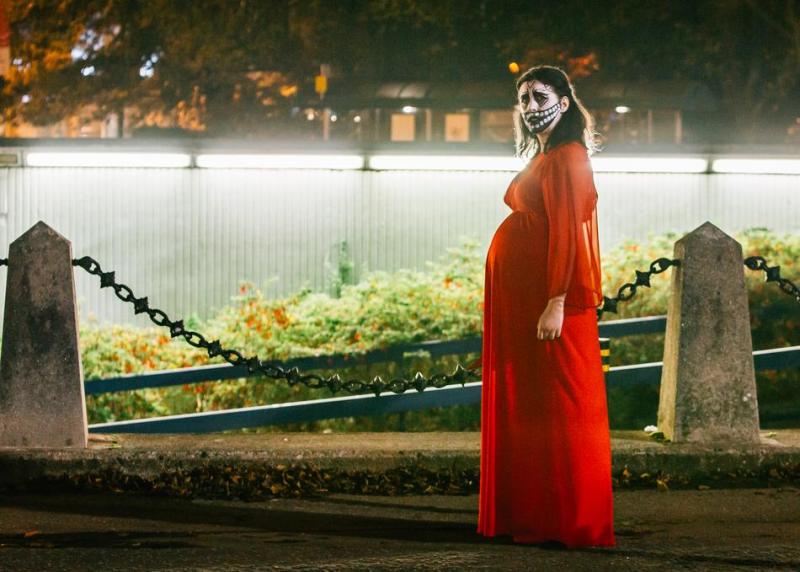 Actress Alice Lowe makes a major impression with her directorial debut, which she also wrote and starred in — during her third trimester of pregnancy. Known primarily for her roles in British comedy TV series and films, Lowe walks the line between satire and horror with Prevenge, playing a pregnant slasher avenging her late husband, a mom-to-be inspired to kill by her unborn daughter. This is not a horror comedy, however, nor is it the kind of  demon-possession genre exercise you’d expect from seeing the words “pregnancy” and “horror” combined.

I connected with Lowe in the days after she presented Prevenge at SXSW, just ahead of the film’s release via the horror-movie streaming service Shudder, to ask about how she shook off multiple cinematic conventions at once.

Lorraine Carpenter: What was the genesis of the idea for this film?

Alice Lowe: I was six months pregnant and I was approached by a company for a film idea for a low budget feature privately financed to shoot that year. I felt like the timing was so off — like where have you been for the last two years of my life?! So I turned it down. But then thought, well, what if I did a pregnant character? I had long thought about Taxi Driver and wondered why we don’t see more loner female characters. I kind of paired this notion of a bitter vengeful person with pregnancy, and the character sprang to life in my mind. I poured a lot of my fears about loss of identity, loss of work, freedom, money and control, into the film. Within two months of “conception” — of the film, haha — we had shot the whole thing.

LC: There’s little evidence of your extensive comedy background in Prevenge, aside from the inherent element of satire in the premise. Did you ever consider a more overtly satirical narrative, or did you always aim more for horror?

AL: Basically I just wrote something. I didn’t overtly aim at comedy or horror — I overtly aimed at a constantly shifting hybrid! My main guideline was a revenge movie structure, I guess, but as far as genre, I really didn’t want the audience to get comfortable. I wanted it to feel like alien territory, as that is what the character feels about pregnancy. In some ways I think of it as a sci-fi.

Comedy to me is something that is just there and it comes up whatever I do. You try to write the truth at the heart of something, even if the situation is surreal, and the humour and absurdity tends to just ooze out. Life is a funny mixture of tragedy, comedy and pathos, so I just try to let the story be as strange as life is. There’s actually a lot of gear shifts between different tones and genres, which is intentional.

LC: Pregnant women are typically victims in horror movies, or childbirth is depicted as part of the horror. It seems as though these are clichés you wanted to avoid.

AL: Yes, I definitely wanted the protagonist to at least be in on the action, even if it’s not strictly her driving everything. In Rosemary’s Baby it seems she’s the last one in on the joke. In her innocence, she seems to think she’s going to call Satan “Jenny” when he’s born. I wanted to dispel any preconceptions, not just about pregnant women, but about a female character.

In some ways Ruth is like an anti-super-heroine. Her special powers are pregnancy! I tried to think what advantages pregnancy gives you, and how you can subvert expectations and how that would help Ruth to kill. Everything gets flipped on its head in the film. But at the same time, I wanted people to gradually come to understand what she’s doing, if not agree with it.

I wanted people to suspend judgement that we usually have for female characters. I thought that if I could ask the audience to travel on a journey with this woman doing terrible things, and forget about whether she’s “likeable” or not, then that’s quite interesting. All women are individuals. We don’t have to see a female character as representative of all women. When you watch Taxi Driver, you don’t think of Travis Bickle as representative of all men. So this was a kind of exercise in how far people will go with this character doing what she’s not supposed to. 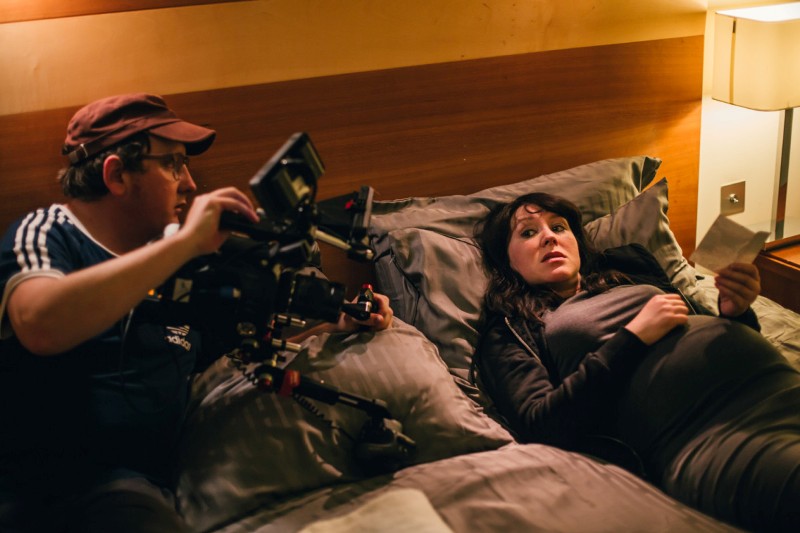 Lowe (right) on the set of Prevenge

LC: Was postpartum depression an influence on Prevenge? Have you or anyone you know experienced any degree of this before?

AL: I can’t honestly say it is. I was pregnant with no idea of whether I would experience post partum depression. It was more an exploration of the existential crisis of the prospect of becoming a mother. And a fear of loss of identity, and of grief, wrapped up in the symbolism of the death of her partner and thus a part of herself.

LC: How did you manage to time the shoot with your pregnancy?

AL: I wrote the script and engineered it purely bearing in mind a very short shoot. I used all my experience from making short films on no budget. It was a case of getting it done ASAP before the baby came out! And then the edit was done once the baby was born. It worked quite well.

LC: How did your own pregnancy go? Was it your first? Were there any pregnancy-related issues that arose during the shoot?

AL: Yes this was my first baby. I found the shoot incredibly enjoyable and really had no problems. I had a lot of pent up desire to direct a film, so I was jumping for joy every day. I was very lucky that I was very healthy with great energy. Also, because I was the director, I never pushed myself to do anything dangerous! We had stunt doubles for particular bits. So really I didn’t do anything physically demanding.

LC: How many years do you see yourself waiting to show Prevenge to your daughter?

AL: I have no idea. I’ll see if she’s interested. She may think it’s the least cool thing in the world. I hope she’ll be well versed in horror though. It’ll be a matter of explaining that it’s just a story and not about me and her! ■

Prevenge is streaming exclusively on Shudder as of Friday, March 24.