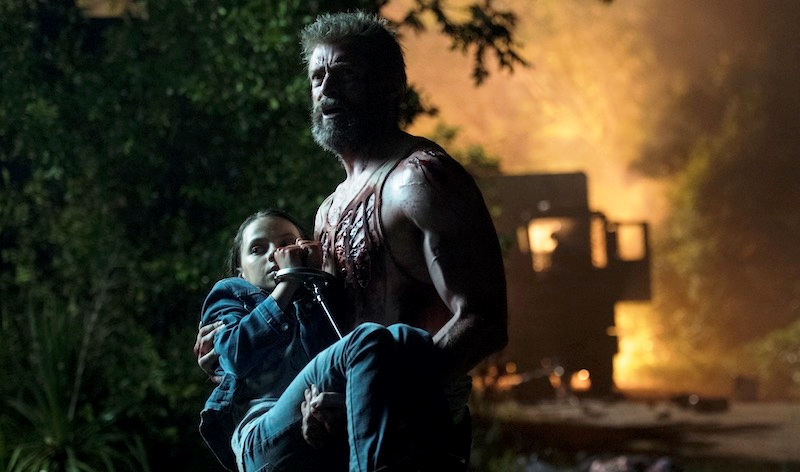 There’s a weird Groundhog Day thing that happens every time I come home from seeing a superhero movie: I sit down at my computer and I write down something that I always, always feel like I’ve written before. I tend to complain about the same things, praise the same things, wish there was more of one thing and less of another. It’s certainly not the most gratifying part of doing this, even if superhero movies are rarely (if ever) the worst movies I wind up seeing.

Almost none of those things apply to Logan, the latest (and presumably final) Wolverine film from Marvel. It’s not exactly Marvel’s first tonal shift from the brightly lit and even-keeled, but it’s certainly the most radical one yet, making a pretty compelling argument for experimentation over repeated serialization.

It’s the near future. Almost all mutants have been eliminated somehow, and what few remain are in hiding. A new mutant hasn’t been born for decades, and most assume them to be pretty much extinct.

A weary, hard-drinking Logan (Hugh Jackman) is now working as a limo driver and crossing the Mexican border periodically to care for the ailing Professor X (Patrick Stewart), who needs to be heavily medicated to control otherwise uncontrollable seizures that can cause major damage.

Logan is approached one night by a woman (Elizabeth Rodriguez) who needs his help transporting her and her daughter Laura (Dafne Keen) to a safe location, away from Pierce (Boyd Holbrook), a real nasty piece of work who takes his orders from the corporation that created and weaponized the girl.

Some have suggested that Logan is a take on the Old Man Logan series of comic books, but the only things it shares with them is the idea of Logan as a grizzled, worn-down protagonist and a futuristic setting. In truth, director Mangold takes his cues from Westerns — particularly the Peckinpah notion of the Death of the West and (more obviously, since a lengthy clip of it is included in the film) George Stevens’ Shane. It’s a gory, pessimistic film in the way that no superhero has been before, less of the manufactured grimdark school of DC mumbling and more of a bordering-on-nihilistic, dusty dissection of the Wolverine myth. I truly never thought a superhero movie would remind me of Bring Me the Head of Alfredo Garcia, but here we are.

Part of the appeal is watching an increasingly grizzled Hugh Jackman work his way to the inevitability of Logan. Jackman was always well cast in movies that often squandered the potential of Wolverine as a character, relegating him to thankless roles or unwatchable garbage. Logan is reportedly Jackman’s last hurrah as the character, and it’s not hard to see a kind of exorcism at play here. If a lack of stakes plagues most superhero movies, Logan has the opposite problem (if we can even consider that a problem): it’s all stakes, some of it delivered inelegantly (any grizzled-badass-and-child pairing tends to skew that way) but always done with a certain dusty integrity.

The film does attack its R-rating with a bit too much gusto — while it’s initially enjoyably jarring to hear Jackman curse out a little girl or watch him sloppily decapitate a dude, Logan sort of returns to that well more than required in its comfortable 135-minute runtime. On the other hand, this approach to storytelling cuts much closer to the bone. As far as I can tell, there’s really one explosion in this entire thing, a record that’s not likely to be beat by any other superhero movie unless they make a standalone Hawkeye movie about his trip to Home Depot (and even then). It’s a little long and a little overly pleased with the leeway it’s been given, but ultimately this is significantly bleaker and ultimately much more satisfying than the genre has accustomed us to.

The runaway success of Deadpool made it so that there was no question we’d see a spate of gory, foul-mouthed superhero films in its wake. Logan, in that respect, wouldn’t exactly exist without that movie’s dick jokes and decapitations. More interesting, however, is this idea that Logan presents what I’ve been waiting for since the beginning of this superhero boom: superhero movies are not a genre in themselves, or at least they don’t need to be. They can be damn near anything, including a fatalistic Western! If there’s anything to be gleaned from Logan, it may be that it’ll open the doors for a superhero movie that’s actually a romantic comedy or a chamber drama or, I don’t know, a musical.

Inevitably, a lot of the press around Logan will centre around the fact that the film “transcends genre” or is “great for a superhero movie”. Let me say this: if you were never interested in watching a Wolverine movie in the past, you may not be more interested in seeing this one. It is still, for better or worse, a movie about a man who has claws that shoot out of his hands. It’s the grimmest, most affecting version of that story I’ve seen, but it’s still a superhero movie, and I’m completely okay with that. Your mileage may vary. ■