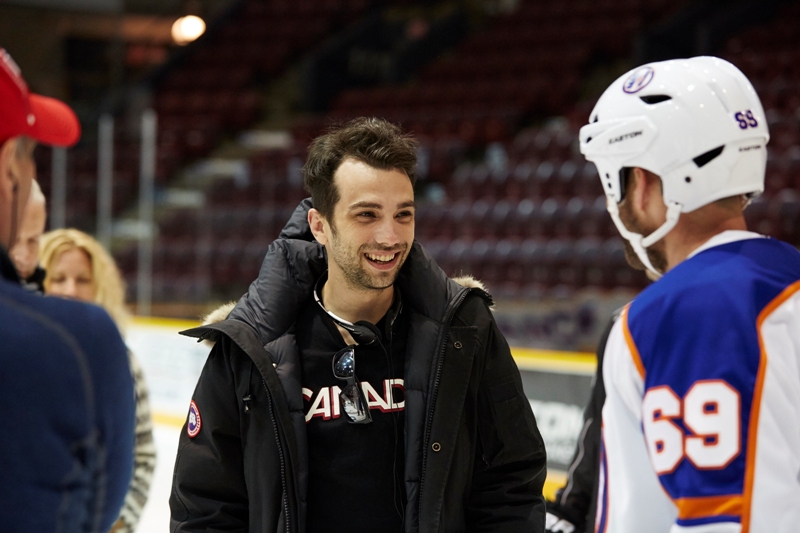 Jay Baruchel on the set of Goon: Last of the Enforcers

Directing was always the goal for Jay Baruchel.

The Montreal native (whose move to Toronto a few years ago — partially to facilitate working on the FX series Man Seeking Woman — prompted much hand-wringing in the local press) was vocal about his desire to work behind the camera for years, though Goon: Last of the Enforcers entered the picture a little sideways. A sequel to the 2011 film (directed by Michael Dowse, who also directed many episodes of Man Seeking Woman) that Baruchel co-wrote with Jesse Chabot, the second Goon film became Baruchel’s directorial debut through a confluence of happenstance, scheduling conflicts… and a little push from the film’s stars.

“We’d always intended to write it, but Jesse and I wrote it for Michael Dowse to direct,” says Baruchel. “He’s our general — we will follow him to the gates of hell, and he’s also one of our mentors. It was literally only when circumstances dictated that he couldn’t return for number two that the question became, well, who’s going to take the reins? We started talking, and there were very qualified men and women, but the best case scenario was the best-qualified stranger.

“So then Seann William and Marc-André (Grondin), each on their own, reached out to me and asked me what I’d think about doing it. Obviously, I’d be lying if I said I didn’t visualize this thing in my head for fucking — I mean, I wrote the first draft with Jesse five years ago! So it was a very quick yes, and I knew this was a hell of an opportunity — not just for me — to do something that hasn’t been done in English Canada. We are the world’s great under-served audience, in my opinion, and I don’t think we see ourselves reflected in our cinema and our TV. And also… England has Bond, New Zealand has Lord of the Rings, the States has Star Wars. I don’t mean to sound so fucking arrogant as to compare Goon to Star Wars, but that was our ambition. Whether or not we achieved it, we wanted to give Canada its epic myth.”

Baruchel slips rather confidently into the role of director, a role that involves flexing some different skills than usual on a press tour. “I don’t really have the words to completely describe how cool it is,” he says. “I just love movies so fucking much! The fact that what I do for a living and how I unwind are one and the same is a very special thing. I know people who lose that — I know friends of mine who work in movies and the last thing they want to do is watch a flick on the weekend, and that breaks my heart. If I ever get there, that means I shouldn’t work in this job anymore. And it’s really cool to get to talk cinema questions. Usually, when I’m promoting a movie, I get nine questions about how did I prepare for the role, one question about what the pranks were at base camp and one question about movies. It’s great to talk about this movie, because I could talk movies — any movie — for fucking hours, and I get to talk about mine!”

Goon 2 sees Seann William Scott returning as Doug Glatt, the most fearsome enforcer in all of minor league hockey. With his wife Eva (Alison Pill) pregnant and his body increasingly prone to injuries, the dopey but sweet Glatt uses one particularly brutal beating at the hands of the animalistic Anders Cain (Wyatt Russell) as an opportunity to retire from hockey and take a job selling insurance. But the draw of the ice (and the blood that spatters artfully across it) proves too much to resist, especially when Anders returns to Glatt’s Halifax Highlanders in a controversial move by his father (Callum Keith Rennie), the team’s owner. Getting back into the game might prove dangerous for Glatt, not to mention the impact it would have on his family life.

“This one is… I don’t know if complicated is the right word, but it’s much more of a grey area — a moral gray area,” says Baruchel. “We show you how the sausage is made a bit more. We show you the repercussions of what happens behind closed doors and the impact on the players’ families. We didn’t touch on any of that stuff in the first one, because the first one is boy meets girl, boy meets hockey. At the start of a love story, everything is fairly black and white and the answers are quite evident. Boy married to girl, boy married to hockey? Shit’s a bit more complicated. You get these beautiful situations where nobody’s wrong. When Eva and Doug have their argument — they’re both right. I think that’s an interesting place to put the audience because, in my heart of hearts, I hope it might spur a dialogue. There’s a larger debate in Canada about the nature of violence in hockey and does fighting have a place in hockey, and I think that both sides out of that debate will feel their opinion respected in this movie.”

“The first movie very much wears its indie heart on its sleeve. It’s the Little Engine That Could. It’s a fucking awesome plucky underground film, in a way. We wanted this to be big and sexy and classicist. The description I kept pitching to people as we were putting together our film was Charlton Heston in Ben-Hur… and the Trailer Park Boys. I want it to be wide! I want it to be 200 feet tall! I want it to pop! I want them to look like superheroes, but I also want that handmade, blue-collar, coarse vibe that makes it so awesome. It’s like punk and opera together. And I think that’s a cool recipe that, for some reason, no one else is fucking with. We shot this in 2.39:1 aspect ratio, it’s a big, old-school, Sovietscope movie, but people are talking about fucking munchin’ boxes and all sorts of stuff, and I think that’s a kind of cool combination because that’s what hockey is! Hockey is, at times, incredibly epic: these huge men in these bright outfits who are 10 feet tall skating at 100 miles an hour. There is something epic and superhuman about it, but then if you ever hear them talk, they talk like the people in my movie. And that is very truthfully hockey to me.”

One of the many challenges of making a film like Goon: Last of the Enforcers is a purely technical one: half of it happens on ice, and ice is not the most resilient and adaptive of surfaces. That means the majority of the crew spent the shoot on skates — but not Baruchel. “God’s honest truth, and I can say it now because the movie’s done, but I am a piss-poor skater,” he laughs. “It’s grounds to take my passport away. It’s embarrassing. My dad’s ghost is still embarrassed about it, he was fucking trying his ass off to try to get me to skate.  Between my actors and all my hockey players, I had a bunch of 17- to 28-year-old alphas, and I needed to project confidence wherever possible. All I needed to do was eat it once on my skates, and that illusion is taken from me forever (laughs).

“But our first AD Buck Deachman, who’s an NDG boy, was on his skates 12 hours a day. All of our actors, all of our doubles, all of our stunt guys. Our dolly grip, Stewie, who did all of our shovel cam stuff, he was on skates 12 hours a day. And what’s so crazy is all the guys who would do the heavy duty skating would break, have 10 minutes to eat, and then get on the ice to play hockey because we had open ice every noon. So these guys would work a six-hour shift, and then go skate for fun, then work another six-hour shift! No NHL player skates for 14 hours a day!”

Baruchel has worked with a pretty wide variety of directors in his career, from first-time filmmakers to living legends like Clint Eastwood and David Cronenberg. I asked him what he learned — or what he thought he might have unknowingly internalized — that he applied to his first feature.

“There’s two things, really,” he says. “There’s the conscious sponge, where I’m actively and vitally listening for things, and there’s the subconscious sponge from just having been there. I can say that in 23 years of acting, I’ve been like on five or six sets that functioned correctly, honestly. Honestly! And I’ve been lucky for that. I got to see first-hand how Clint Eastwood attacks a scene and puts it together. I got to see how Cronenberg attacks a scene and puts it together. Yeah, I’d be a fool if that didn’t rub off on me. That was the vibe I wanted on my set — I wanted it to be peaceful. I wanted it to be fun and happy. I wanted it to never be any people confused about what we’re doing or feeling like we’re wasting time. I was always fucking clear about what we were doing, and we were always working.

“That’s the other thing, we never wasted time. One of the things I’m most proud of from the production of that movie is how we spent our days. We averaged, like, 45 set-ups a day; on one day, we got to 84 set-ups. I mean, no TV show does 84 set-ups. We just fucking flew, man. It’s equal parts what I learned from Clint and Cronenberg: they’re both three-takes-tops guys… because they fucking know! If you have it in three, you have it in three! Plus, if you have it in three, that means I could spend 10 takes on one shot, or I could do three takes of three shots. That helps me much more. My buddy, who’s a former stunt performer, said we’re doing it Hong Kong style: click-click-click! That allows us so much more images to choose from when we’re cutting, as opposed to belaboring one fucking moment. If you can’t find it in four takes, that’s because you don’t know what you’re looking for.” ■

Goon: The Last of the Enforcers opens in theatres on Friday, March 17.