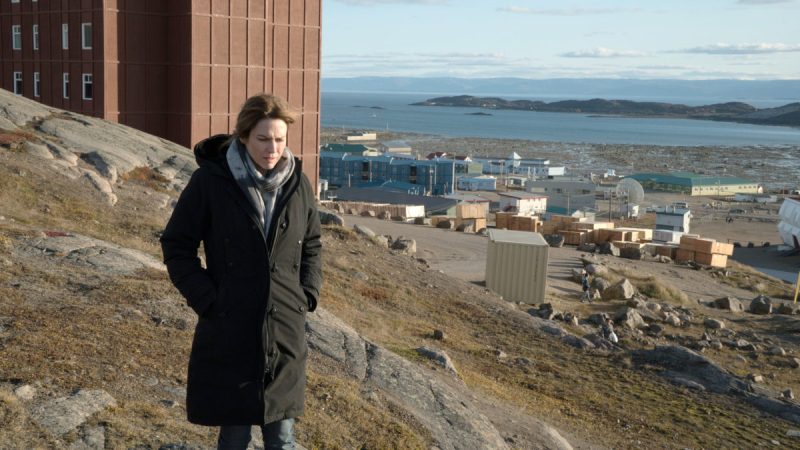 It might be hard to pinpoint what makes the north so appealing to Canadian filmmakers. Presumably, many of them will have limited experience with life up there until they make a movie about it, so exploration certainly factors in. As Kim Nguyen told me earlier this year, it could also be a certain fatigue with urban stories and city-dwelling protagonists.

Filmmaker Benoît Pilon certainly didn’t make Iqaluit as an excuse to explore the north — he’s already made a documentary and a feature about life there, and it’s those two spheres of filmmaking that square off (sometimes awkwardly) in his newest film.

Gilles (François Papineau) works in construction in Iqaluit, Nunavut. Having left his wife Carmen (Marie-Josée Croze) to wait for him in Montreal, Gilles nevertheless integrates fairly well to daily life in the remote community. He befriends an employee, Noah (Natar Ungalaaq), spending time with his family while remaining somewhat at odds with the community, who have difficulty seeing him as something other than a white outsider who always seems to have money in a world where many don’t.

When a mysterious accident leaves Gilles seriously injured, Carmen is forced to come to Iqaluit and see the life that Gilles had kept from her. Drained and disoriented from the constant daylight of Nunavut, she attempts to untangle the web left by her incapacitated husband.

Iqaluit most reminds me of the Dardenne brothers’ latest, The Unknown Girl. It’s a film with a resolutely detail-oriented approach to storytelling and pace that nevertheless operates under a fairly straightforward “mystery” structure. Like The Unknown Girl, Iqaluit is markedly more interesting when it explores the nooks and crannies of daily life rather than its flimsy whodunit plot. The setting is fascinating, and yet it continually returns to its not-terribly-surprising surprises. It’s sort of a catch-22: you can’t really have a movie without devoting some of the time to who-done-what, and yet it also seems clear that it should be the least of anyone’s concerns.

Like The Unknown Girl, though, Iqaluit is more explicitly the work of a thoughtful, engaged filmmaker than the half-assed potboiler that sometimes pokes through. Pilon gets a lot of mileage from the slightly alien terrain of Iqaluit and its banal-yet-surreal permanent grey light. He also uses Croze beautifully, finding quiet despair in her increasingly sleep-deprived features.

There’s not much revealed about Carmen over the course of the film — it’s almost as if the story happens to her rather than being something she’s actively a part of, but Croze carries Iqaluit over its more stilted elements. The same can’t really be said for the supporting actors, who are also given the unenviable task of carrying most of the exposition for the aforementioned hokey whodunit aspect of the film.

It would be unfair to say that films about the north are overplayed. It remains fertile ground for telling stories and for representing the rich Inuk culture as well as the tensions that may arise when outsiders arrive. My enjoyment of Iqaluit was somewhat dampened, however, by the fact that it’s the third or fourth glum, dramatic film set in Nunavut (or Northern Quebec) I’ve seen in the last year. This is no one’s fault, of course, and it speaks volumes to some particular blind spots of mine — Liam Neeson’s made four movies about avenging his family in the last year, I’m sure, and yet I haven’t complained about that — but that’s not to say Iqaluit doesn’t have many strengths. Being compared to the Dardennes is always a good thing. ■