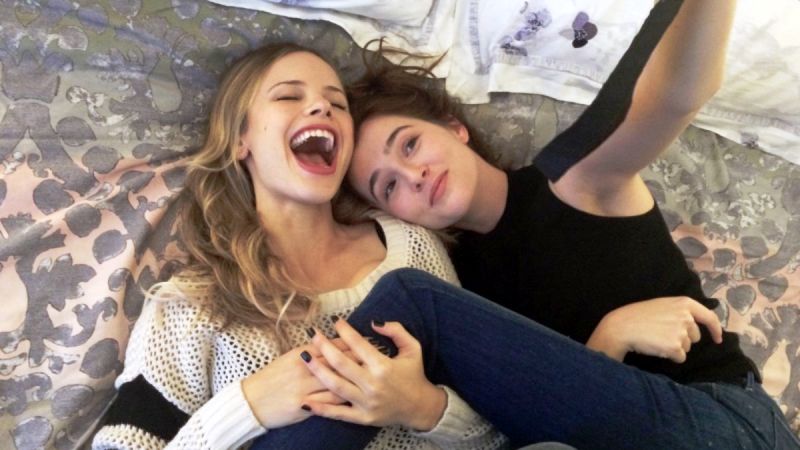 Halston Sage and Zoey Deutch in Before I Fall

Ry Russo-Young’s Before I Fall hinges on a concept that might seem familiar. Zoey Deutch (Why Him?, Everybody Wants Some!!) stars as Samantha Kingston, a popular high schooler who spends Cupid Day (Feb. 12) in much the way you’d expect her to: hanging out with mean-girl friends and working herself up for that evening’s party, where she’s planning to lose her virginity to her jock boyfriend. That night, however, she gets into a horrific car crash and dies — or does she? Every morning, she wakes up, doomed to repeat that same day over and over again.

Before I Fall is based on a novel by Lauren Oliver that basically applies the conceit of Groundhog Day to a teenage story, removing much of the comedic irony inherent to the concept to focus on the more emotional and dramatic aspects of living the same day over and over again. The film’s roots may be in young adult literature, but this is no Twilight.

“Our film is pretty special in the marketplace — honestly, it’s a rare breed,” says Russo-Young. “We really wanted to dignify the teenage experience. When I looked around at other films about teenagers, I felt that they all talked down to them. They all have the same bright, pop colours, which demanded a certain use of colour since we were afraid of going too dark.

But the truth is that being a teenager is a really dark, angsty time of drama, and to do that justice and with respect is something that I don’t see very often. I wish that this movie had existed when I was a young girl, but it isn’t just for young women — it’s for everybody.”

“It’s really wild to think that a single day or even a single moment can change your whole world,” says Deutch. “You can change someone else’s whole world in one moment. You don’t have to be a teenager to think, ‘Wow, what I do today matters’ because that’s relevant and applicable to anyone, anywhere. No matter your experience or your relationships, to be reminded that what you do matters is very powerful.”

In a movie landscape where young adult novels are often seen as potential for a lucrative franchise, Before I Fall pretty much stands alone. It feels like an indie film — because that’s exactly what it is!

“It was a challenging adaptation in terms of looking at the recurring day construct and doing it justice,” says Russo-Young. “Basically, the book is so internal — it’s all about Sam’s mind and her perspective. That had to be translated into a film and keep that sense of dramatic irony and character development. That was a big piece that was important to me.

“In terms of the shoot — Zoey has said this before — but the irony of shooting a movie about time was that we didn’t have enough time to shoot it (laughs). It was very challenging in terms of getting everything we needed, but I really took my cues from where Sam was at psychologically and emotionally and made a lot of my creative decisions based on her.

“The movie is really about coming into a sense of self-awareness,” she continues. “Sam becomes who she is and takes ownership over her own life. In the beginning of the film, she’s a member of the herd.”

“Yeah, we wanted her to feel like a follower,” adds Deutch. “She does what the group does,” continues Russo-Young. “The movie is about her coming to question the world around her, finding her own moral compass and making her own moral choices. That’s something that’s applicable to all people, no matter what age they are.” ■

Before I Fall opens in theatres on Friday, March 3