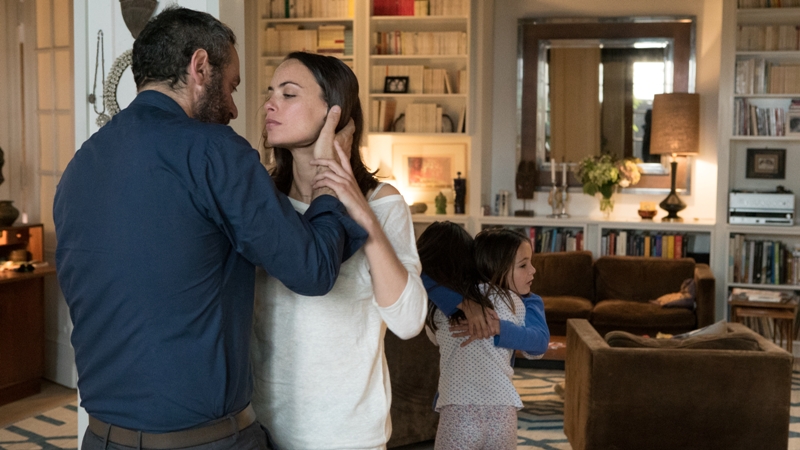 Joachim Lafosse’s After Love (L’économie du couple) has a premise that wouldn’t feel inherently cinematic on paper. It chronicles not the disintegration of a couple but the weird purgatory that follows it. Marie (Bérénice Bejo) and Boris (Cédric Kahn) have already called it quits when the film begins, but they still live together in the apartment where they were raising their young daughters. Marie makes more money than Boris, though it’s clear that her family’s wealth came in handy when they purchased the apartment 10 years prior. Boris, on the other hand, works as a handyman and doesn’t have the means to purchase even his half of the apartment. He argues, however, that all the work he put into renovating the apartment upped its value and therefore entitles him to an equal share should the apartment be sold.

Their semblance of a life together breaks down little by little as Boris drags his feet trying to find a place to live. The two regrettably use their daughters as pawns in their manipulation and the whole thing grows increasingly ugly — though always relatable, even to those (like me) who have never lived through a situation even remotely similar.

“It’s not something I’ve ever lived myself,” says Lafosse. “I am separated from my son’s mother, but it was never about money. I’ve never lived it, but I lived with someone who lived something very close to it. It happened to my parents, so I lived it as a child. I heard my parents fight about money as they were divorcing, so I suppose you could say that I lived it that way.

“We always tell the children of divorce that they don’t have to choose between their mom and dad,” he says. “I wanted to make a movie where the viewer didn’t have to choose either. In a love story, there are no good guys or bad guys. When you start depicting the other as a villain, it’s because you forgot what you’ve done.

“As far as I’m concerned, money is only a symptom. It’s not the cause,” he continues. “Money is a way to recognize what each has done. When you break up, you want to be recognized for what you brought to the table. It’s not always simple. (…) It’s a great topic, though. When we were shooting, something happened that had never happened to me before. Everyone on the crew — they all had something to say about the topic. They’d all lived it or knew someone who had!”

Lafosse focuses the film entirely on the physical space of the apartment; the characters are rarely shown outside of it — and apart from a few exceptions — are almost always the only people in the film. Lafosse intimates, for example, that Boris owes money to someone, but never explicitly explains it, keeping the physical boundaries of the home a psychological boundary for the characters.

“I’m a big fan of Who’s Afraid of Virginia Woolf? and I had been wanting for years to find the right screenplay,” he says, “a screenplay that would allow me to work that closely with actors without being constrained and limited by the realities of making a movie like moving sets around and so on. This time, we spent six weeks in one location focused entirely on performance. I loved it — we had a week to rehearse on-set, since it was already ready. That’s what I’m most passionate about in the world of cinema. That, and being able to work with Cédric, who’s also a director, and Bérénice, who’s a great improviser on set. With kid actors, you always have to improvise. You can’t really just get them to say things. What they need is to be put in a context that allows them to play and live. I loved it. It was the happiest shoot I’ve ever had.”

Like Lafosse’s previous film The White Knights, After Love isn’t a particularly uplifting experience. I ask him if he considers himself a cynical filmmaker.

“Not at all,” he says. “I think I’ve only just started to realize now that my obsession is the idea of limits and the laws that allow us to live together. That’s the case here and it was the case for all my previous films. But I don’t feel like a cynic at all. Cynicism, for me, is the comedy of the weak. I think it’s possible for all of us to live happily together, but maybe the films are some sort of totem in which I put all of my anxieties. Something pretty particular happened to me on this movie. Usually, I make films that are inspired by… well, actually, my separation happened after I made the movie. But it’s very strange, because I keep telling myself, ‘Fuck, I’d have to be completely out of inspiration to make movies that reflect my own life and worldview!’ (laughs) So right now, I’m writing two films — one’s a tragedy, and one’s a comedy. I’m trying, at least.

“But to me, it’s not a cynical film,” he adds. “In English, the title is After Love, which is a very bad title, in my opinion. There’s still love there. They won’t live together, but they still need to raise their kids. That’s love. It’s a difficult love, but it’s love.” ■

After Love opens in theatres on Friday, March 31