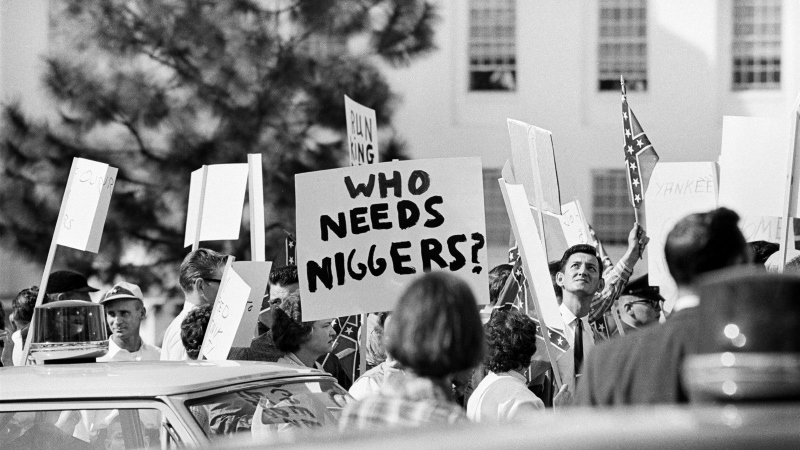 I Am Not Your Negro

The most recent footage included in Raoul Peck’s I Am Not Your Negro is of Ferguson and the events following the fatal shooting of Michael Brown in August of 2014. It would be naive to say that these events were the catalyst for the film, which uses James Baldwin’s words to make a point about race in America. According to Baldwin (and, we must infer, Peck), the story of black people in America is the story of America, and it isn’t a good one.

What’s perhaps most striking about I Am Not Your Negro is all of the shit that has come down since those events and the way the film not only seems to predict them but actively awaits them. There are clean-cut white men brandishing swastikas here, too; there were black men beat to death by police in 1968 as there were in 2014 and, as Baldwin seems to suggest, as there will be in 2052. I Am Not Your Negro is angry and polemical, but the most heartbreaking fact of it is that it also feels resigned.

I Am Not Your Negro isn’t a traditional biographical documentary. It uses as a springboard Baldwin’s unfinished book of essays Remember This House (which focused on the assassinations of three pillars of the Civil Rights movement — Malcolm X, Martin Luther King and Medgar Evers — all of whom Baldwin knew personally) and Baldwin’s correspondence with his editor while working on the essays, but it does not dwell on the events of Baldwin’s life: not his childhood, not his homosexuality, not his novels, not his death. It is, in that sense, as much of an essay as the actual essays at its core, moving from idea to idea and filling in the blanks left unfinished in Baldwin’s manuscript.

Through narration of Baldwin’s text (by Samuel L. Jackson in the English version and French actor/rapper Joeystarr in the French version), the film attempts to essentially formulate a cohesive essay from the 30 or so pages left of his manuscript. It’s not always an obvious task: the film often zips from topic to topic, beholden to Baldwin’s unfinished thoughts and the finality of his words. Cinema is a recurring motif in his writing, from his early memories of watching Joan Crawford dance to his excoriation of the desexualization of black movie stars like Sidney Poitier and Harry Belafonte. Peck’s job, at least on the surface, appears to be one of curation and connection. The film has almost no original footage (and what little it seems to have is mostly throwaway shots of Times Square and, in one instance, a peculiar CGI desert landscape) and yet it feels precisely calibrated even in its sometimes unwieldy, kaleidoscopic approach to the material.

There’s space out there, I think, for a traditional documentary about James Baldwin — one that goes through his life chronologically and explores each of his seminal works in detail — but something like I Am Not Your Negro is somehow simultaneously overwhelming and a great introduction. There’s no shortage of footage out there of Baldwin being interviewed (especially on late-night talk shows, which is doubly incomprehensible in a world where he would now presumably be involved in Carpool Karaoke), to the point where you could practically make a film like Eat That Question: Frank Zappa in His Own Words about him, but I Am Not Your Negro feels closer to being a film by Baldwin than a film about him.

James Baldwin died in 1987, long before he could ever witness the first black president (though he expresses deep suspicion at this possibility when Bobby Kennedy brings it up) or see hip hop become a dominating cultural force. He died before Tamir Rice or Trayvon Martin were ever even born.  One could argue that the ideas he articulated in that unfinished manuscript belong to the past, and in a sense, they have to. Baldwin wasn’t a soothsayer or some sort of visionary oracle; he could only write about what had already happened, and his outlook was fairly grim. Presumably it’d be even grimmer now — hell, it’s grimmer now than it was a year ago when the film was made. ■