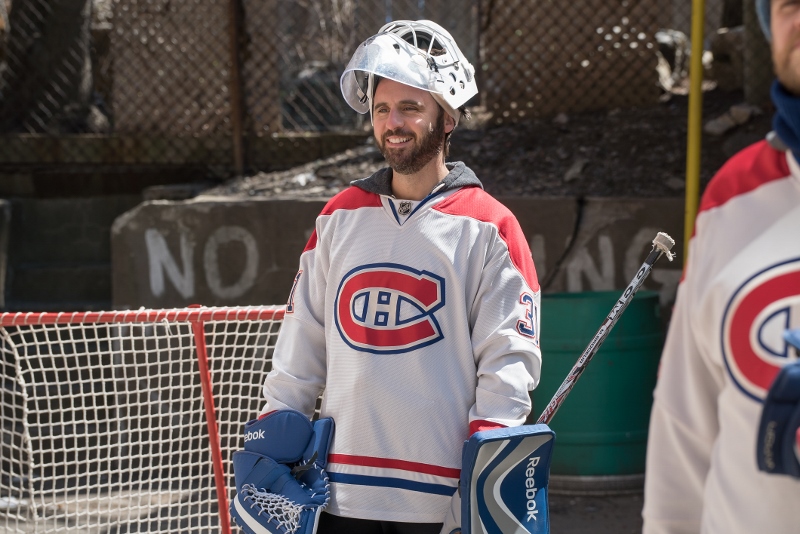 Quebec cinema and the Quebec comedy world have a pretty splintered relationship. Quebec probably has more household-name comedians per capita than anywhere in the world, yet the industry produces very few comedic vehicles for them considering the popularity of stand-ups — it’s as if there were 20 Amy Schumers but not a single one of them gets a Trainwreck.

True, most comedy stars eventually get a vehicle by climbing to the very top of the heap, and character acting has always proven to be a reliable gig for those on the way down, but there are surprisingly few comedies tailored to a particular comedian’s strengths in the Seth Rogen or Adam Sandler mould.

Part of that stems from the relatively large pool of talent serving a relatively contained market. Controversy periodically brews over the legitimacy of untrained stand-ups “taking jobs” from trained actors, which sometimes results in comedies disastrously cast with bankable serious actors.

Louis-José Houde is sort of an exception in that he has been both an extremely popular stand-up comedian and the lead in more than one commercially successful comedy, though neither were actually vehicles. Both De père en flic and Le sens de l’humour were high-concept comedies in which Houde had to share top banana status with at least one person — which makes the sudden shift into dramedy that Ça sent la coupe represents all the more peculiar.

Ça sent la coupe is a Sundance-formatted dramatic comedy of the type typically favoured by big comedy stars trying to avoid being typecast — it’s Houde’s Punch Drunk Love (or, considering the amount of moping, maybe more his Reign Over Me), except there’s not really a Mr. Deeds to move away from.

Max (Houde) lives for hockey. He never misses a game and spends his days tending to a hockey memorabilia store that was handed down to him by his late father. The store doesn’t do much business, but Max feels it’s his legacy to keep it going. That affects both his mood and his relationship with his girlfriend Julie (Émilie Bibeau), who walks out on him one night when all his buds (Louis Philippe Dandenault, Patrick Drolet, Maxime Mailloux) are over. Max finds himself in a freefall, unsure of what he wants to do with his life, pushed on by his friends and tempestuous sister (Julianne Côté) to make a decisive move once and for all.

Houde’s trademark mile-a-minute, rat-a-tat delivery is all but gone here. His Max is a more melancholic sort who never raises his voice or takes up much space in conversation. He reacts more than acts (which in itself is part of the reason why his world seems to be crumbling around him). Director Patrice Sauvé utilizes Houde’s least comedic feature — his permanently sleepy eyes — consistently throughout the film to bring out a subdued performance that definitely recalls the most melancholy side of Sandler, Williams et al.

Ça sent la coupe is set during the 2009-2010 hockey season, the Habs’ best season since their Stanley Cup win in 1993. That makes it a peculiar kind of period piece, and the filmmakers have ingeniously structured it in a way that nearly every scene in the film can directly be related to a game played by the Habs. It sounds gimmicky and maybe even a little obvious, but this conceit is actually a pretty fantastic way to weave hockey into the film without making it an explicit “hockey” movie.

The rest of the script is overly conventional, ticking all the boxes of sad white man mopefests: the underwritten friends who are all, for some reason, extremely different from each other in the way that actual friend groups seldom are; the girlfriend who seems to have no particular inner life beyond getting her boyfriend to grow up and move on from childish things; the inevitable scene where our protagonist calmly destroys something to signify his inner turmoil; the late-in-the-game flashback that explains pretty much everything left unexplained, and so on. Ça sent la coupe holds no particular surprises on that front, and yet there’s something weirdly comforting about the way it goes about its business.

What Ça sent la coupe most closely resembles is the work of (frequently adapted) novelist Nick Hornby — it sits somewhere between High Fidelity and Fever Pitch in its themes and works within that same seriocomic range. I like Hornby a lot because he writes about mopey white men with immature hobbies, but I’m also of the opinion that this is well-trod ground in storytelling. What makes Ça sent la coupe interesting is not so much what it says, but how it has adapted what it says to a typically Québécois story.

It seems that a lot of the recent conversation about Quebec cinema has revolved around commercial prospects: the simplified argument is that Quebec films are either populist Franken-films cobbled together for maximum profit or impenetrable art films meant to impress on the festival circuit, after which they more or less sink without a trace. Ça sent la coupe is sort of both — it’s certainly populist and designed to appeal to the broadest audience imaginable, but it’s also artfully constructed and thoughtful in its approach to the material. It’s the kind of down-the-middle sure thing that I often find irritating when the Americans do it (see Me and Earl and the Dying Girl, The Hollars etc.) and yet I can’t bring myself to dismiss Sauvé’s film for the same reasons. ■