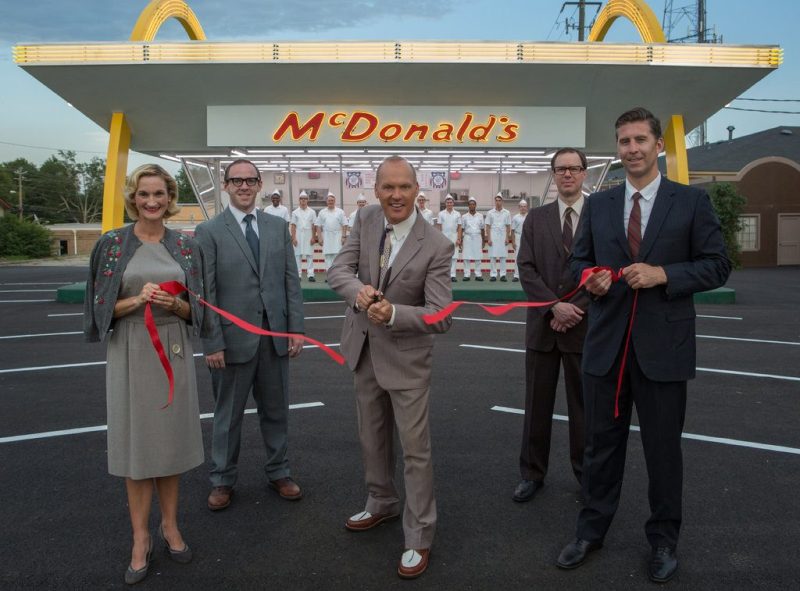 Michael Keaton (centre) in The Founder

I tend not to read other people’s writing on films I know I’m going to write about. It’s too easy to be swayed by a persuasive opinion and too easy to internalize a certain turn of phrase and unwittingly use it myself, but I’ll cop to checking out a few reviews of The Founder before I sat down to write this.

I walked out of this otherwise pretty straight-forward film confused — did I really just watch a film that supported and celebrated the cutthroat capitalism that led from McDonald’s being a mom-and-pop burger stand in San Bernardino to an inescapable phenomenon as common as lampposts and grass? Is John Lee Hancock’s The Founder really a sympathetic portrayal of a guy who basically stole every idea he ever had and built a global empire almost entirely off the backs of others?

Most reviewers seem to think it isn’t. Many celebrate Hancock and writer Robert Siegel’s corrosive irony and the way they play Ray Kroc’s qualities and flaws against each other. I see all of that in The Founder, and yet I can’t help but see a million finance bros grow tumescent in their East Village lofts as they watch Kroc swindle and manipulate his way to billionaire status. If there are some moral lessons to be learned from The Founder, they’re buried deeper than I care to go look for them — and I know one incandescent-skinned politico who might feel that fucking over the little guy by all means necessary is a very, very inspiring notion.

Ray Kroc (Michael Keaton) is a middle-aged huckster whose current scheme is a milkshake machine that makes five drinks at once. His overly-rehearsed sales pitch doesn’t do much for most, but he does land a large sale to an unassuming burger joint in California. His curiosity piqued by the quantity of the order, he makes the trip to San Bernardino to find the McDonald brothers (Nick Offerman and John Carroll Lynch) have quietly revolutionized the food service business, effectively creating the template from which fast food emerged. Energized by the discovery of a brand-new way to maximize profits, Kroc enters a tentative franchising partnership with the brothers, who require final say on every and all decisions made by Kroc.

While this originally serves Kroc well in setting up the franchises, the McDonald brothers’ exacting standards make it difficult for him to expand at his expected rate. Stuck with forking over their franchise fees and respecting their unerring desire to serve quality product (like shooting down Kroc’s idea to replace all of the real ice cream in the milkshakes, which costs a fortune to refrigerate, with a powdered substitute), Kroc operates as a bit of an under-the-radar renegade as he sells franchises throughout the Midwest, eventually putting him in a position to buy the rights from the McDonald brothers outright.

As it stands, I’m not sure if the filmmakers’ decision to make Kroc both a protagonist worthy of scorn and begrudging respect is all that effective. Hancock is no Scorsese, and it’s difficult to spin Kroc’s pretty unpleasant actions into the stuff of triumph without leaving a sour taste in viewers’ mouths. I personally found Kroc’s cheap tactics completely abhorrent, but then again you could see this kind of shit spun into gold in some entrepreneurship seminar in a hotel by the airport. On one hand, it’s admirable that Hancock lets the viewer decide whether Kroc’s hostile takeover methods and cutthroat capitalism are a legitimate means to an end or the sign of a very twisted dude. On the other, the film so vividly avoids any type of moralizing that it’s hard not to read some scenes as triumphant even when someone is having their lifeblood drained from them by a big, evil corporation in the making.

I suppose part of my reticence is that I have trouble imagining Hancock wielding an irony scalpel so precise that it eludes me. While a fine director, Hancock has done most of his work in down-the-middle mid-budget studio movies like The Rookie, The Blind Side and Saving Mr. Banks – films that, while solid, hardly betray the kind of acidic verve necessary to skewer a subject by giving them enough rope to hang themselves. That’s perhaps part of the brilliance that’s becoming more obvious to me as I write these words: that Hancock and screenwriter Robert Siegel apparently have so much contempt for Kroc that they opt to do nothing but let the man’s actions speak for themselves.

In a lot of ways, The Founder is what you make of it. I can imagine a lot of business school graduates and Shkreli-type start-up bros making this their new Scarface as much as I can imagine shell-shocked students studying it in the post-Trump apocalypse that suddenly makes Mason jar lids currency.

I imagine it’s mostly coincidental that The Founder hits Montreal theatres on the day of Trump’s inauguration, but it’s also entirely terrifying. Hancock’s film serves not really as a cautionary tale but as an entirely depressing moral tale. Not only do assholes finish first, they might never even know they were an asshole in the first place. ■

The Founder opens in theatres on Friday, Jan. 20. Watch the trailer here: