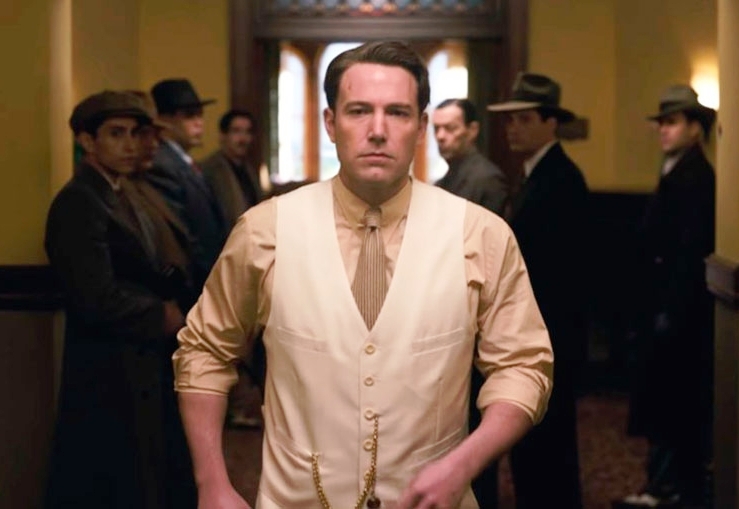 Ben Affleck in Live by Night

It’s not that surprising that Ben Affleck digs crime writer Dennis Lehane. Lehane writes tough Boston stories full of taciturn men, often steeped in the history of the town in a way that places him in the very upper echelons of living crime writers (I also really like Lehane, in case you couldn’t tell).

Affleck’s choices of Lehane adaptations, however, have been less than predictable. His directorial debut Gone Baby Gone was based on the fourth book in a series, and his latest effort adapts the second installment of Lehane’s “Coughlin” series, a book generally considered to be a step down from his magnum opus, The Given Day. While I would love to see a big screen treatment of The Given Day, I can’t say that Live by Night particularly satisfies that appetite in any meaningful way.

Even the best crime writers often wind up writing the same book twice. The problem with Live by Night is not so much that it’s derivative of another Lehane novel as much as it’s derivative of 100+ years of silver-screen gangster sagas. It’s a rags-to-riches gangster opus that ultimately delivers the extremely tepid message that crime doesn’t pay, and even a director as talented as Affleck can only do so much to serve up the dynamics of an 80-year-old James Cagney vehicle in any original way.

Affleck plays Joe Coughlin, the son of a Boston policeman (Brendan Gleeson) who has made his post-military fortune in stick-ups and sundry robberies. He’s in love with Emma (Sienna Miller), the mistress of the Irish gangster that runs Boston (Robert Glenister), which seriously complicates his life when a stick-up goes awry, landing Coughlin in jail and Emma presumed dead.

After doing his time, Joe joins his partner in crime Dion (Chris Messina) in Florida, where he gets involved in the flourishing bootlegging business under mob boss Pescatore (Remo Girone). Bootlegging is booming in the fun-loving Florida Keys, and Coughlin strikes a peculiar “don’t ask, don’t tell” relationship with the local sheriff (Chris Cooper) that nevertheless puts him in a tight spot with the competition AND the KKK, who don’t take too kindly to Coughlin’s relationship with a Cuban woman (Zoe Saldana) or his live-and-let-live take on human relations.

All of this, as you may have gathered from a summary that doesn’t even touch on the sheriff’s daughter (Elle Fanning) and her tumultuous relationship to Coughlin’s business interests, is a hell of a lot of story to tell in one movie, and Affleck relies on some pretty tacky voiceover to drive the movie along while also peppering the film with Scorsese-esque everyone-is-getting-shot montages. Part of the strengths inherent to Affleck’s earlier films was a certain amount of genre-conscious tightness that goes flying out the window here as he indulges in his wildest gangster-epic fantasies. It’s admittedly pretty entertaining, but nothing we haven’t seen before in the works of a seemingly endless number of directors who unsurprisingly grew up fantasizing about making their own Godfather.

Despite the fact that Florida in the prohibition era is a relatively novel setting for this kind of film, the story is plagued with the kind of shorthand that has survived in the genre since the 30s: the plucky moll, the daddy issues, the steely resolve etc. What’s more, Affleck’s all over this thing but the performance he gives at the centre of it is surprisingly wooden. I’ve always thought him to be a solid, dependable actor, but like Colin Farrell, he truly shines when he’s allowed to be cheeky and confrontational and yet periodically gets roped into playing these silent, soulful badasses to diminishing returns. (Affleck roped himself here, to be fair.)

Joe Coughlin is written as an iron-jawed badass halfway between the Terminator and Humphrey Bogart, but Affleck’s triple-threat skill package simply lacks the gravitas necessary to pull that off. He delivers one-liners with panache but seems stiff and distant otherwise, basically approaching the role the same way he does The Accountant, where the motivations are extremely different. Affleck remains a strong visual stylist who brings plenty of atmosphere to the film, but it’s still just a whole lot of famous people in awkwardly perched fedoras running around with tommy guns.

Period gangster movies are basically the pizza of the silver screen — even the very worst one (probably Gangster Squad, if I’m being honest) is still palatable. They’re both dependable, comfortable standbys that can only disappoint to a relative extent. I was thoroughly entertained watching Live by Night, and yet I came out mostly unsatisfied with the final product, a slick and digestible film that almost cons you into believing that there’s more to it than meets the eye. There isn’t: there is exactly as much as meets the eye, and as great as it all looks and as much effort as everyone seems to be expounding, Live by Night feels very obligatory. It’s a slice wolfed down at closing time with only the best intentions in mind — but very limited potential returns. ■

Live by Night opens in theatres on Friday, Jan. 13. Watch the trailer here: