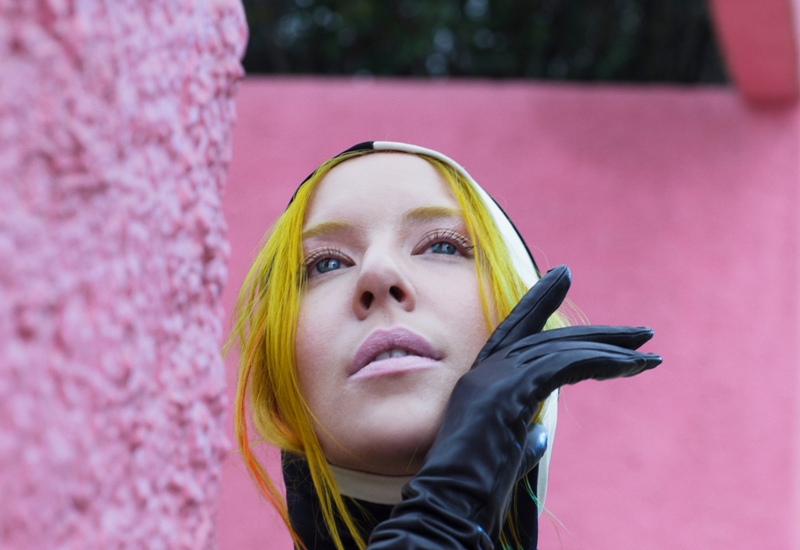 With the impending reality of Trump’s presidency hitting this week, even Noam Chomsky is claiming we’re on the edge of the apocalypse. Coincidentally, Toronto/Montreal synth-pop powerhouse Austra are dropping their latest album Future Politics on his inauguration day this Friday, in an attempt — according to singer and lead songwriter Katie Stelmanis — “to replace the coming dystopia.”

Despite the fact that Trump’s rise to power wasn’t part of this concept when Future Politics was being written, and the release date was pure happenstance, Stelmanis admits that it’s more timely because of it.

“I was worried that the themes on the record wouldn’t connect or that people might not be interested,” she says. “It feels super relevant now but it’s also super intimidating because now I feel like I’m not making the right statement.”

Stelmanis even paints pictures of her visions of our potential future in her music videos for “Future Politics” and “Utopia” — the former is set in a bordered, industrial prison and the latter in a world where technology is working to make us happy rather than efficient.

Part of this vision came from a new found obsession with futuristic fiction. “I got really into feminist sci-fi, and I read this one book called Woman on the Edge of Time by Marge Piercy,” Stelmanis says. “The future is Marge Piercy’s vision of utopia so it’s super relevant and it could’ve been written now.”

What Stelmanis really wanted to explore on the record, however, was the possible directions society could go if things don’t change, and she’s not too optimistic. “I just think the idea of permanent growth is counterintuitive and there comes a limit to how much you can grow,” she says. “We’re just starting to reach these limits now environmentally, economically and the way that we’ve approached globalization has us in a position of massive wealth inequality that may not be reversible at some point.”

While Stelmanis believes that placing the blame on anyone for this dangerous course is too complex to narrow down, she does think that we can start getting back on the right track with the right mindset. “There needs to be a major shift in how we think about living on this earth. It needs to be less about borders and dividing people and more thinking holistically.”

That borderless view carried over to an international writing process that deeply influenced the sound of Future Politics. “I started writing the record in Montreal in the winter, freezing and dark, and that was a pretty depressing time. I was feeling very isolated and that mentality filtered into the earlier songs which are more intense and melodramatic, and then Mexico (City) is an immediate sensory shift.”

Stelmanis believes this shift in mood came down to the amount of sunlight she was taking in while in Mexico City. “Being close to vitamin D every day just changed the trajectory of the record and took it from pessimistic and sad to something more optimistic.”

When it was time to work on the next album, Stelmanis wanted complete control, something she didn’t have given the mixed writing and various producers on Austra’s previous records, Olympia.

Though Stelmanis enlisted Austra’s live engineer to collaborate during the mixing stage, Future Politics is really the result of a long and arduous solo process, one that left Stelmanis with fresh confidence as a producer and a willingness to branch out in future. “It was great to be involved in every single step, and I feel more confident to work with others again.” ■