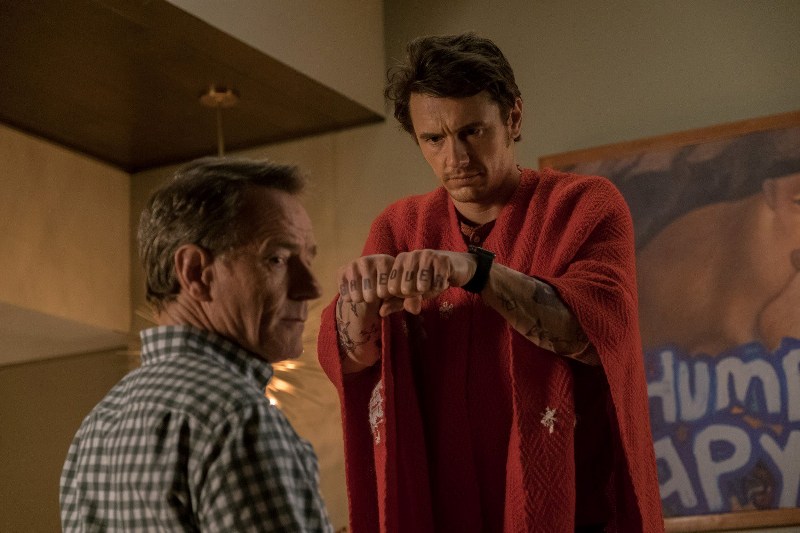 Bryan Cranston and James Franco in Why Him?

Just about the only film trend that can be neatly separated into decades are comedies, or precisely comedy formats. The 1960s were dominated by bright rom-coms, which moved into slightly more intellectual Neil Simonesque comedies by the ’70s, into star-driven high-concept films in the ’80s and some of the ’90s. In the ’90s, comedies were also effects-laden blockbusters, which eventually moved into the gross-out genre with some help from the Farrellys until The 40-Year-Old Virgin married that gross-out aesthetic to a somewhat more organic style of storytelling.

There may be some outliers — and in fact, many of the best comedies released in any of those time periods actually deviate from the trends – but that generally defines the trends of mainstream comedy films since the dawning of TV.

I mention all this because we’re in an era where many decry the death of film at the hands of television (which, by definition, is now more like “serialized storytelling”) and I’m not sure the true trend of the 2010s is really clear yet. If any genre could logically be killed by television, it should be comedy. Comedy programs are pretty much the first thing people used televisions for in the first place, and yet comedy holds on tight. A comedy feature is inherently different from television, of course; you can’t tell the same story in both modes and hope to come to the same result, which is starting to get to the point of what flummoxes me about Why Him? I don’t know where it fits in.

Buttoned-down Michigan print shop owner Ned Fleming (Bryan Cranston) loves his little girl Stephanie (Zoey Deutch), so he doesn’t bat an eye at her request to spend Christmas in California, where she’s going to college. What Ned, his wife Barb and teenage son Scottie don’t know, however, is that Stephanie has been hiding her latest relationship from them. Stephanie’s new beau is Laird Mayhew (James Franco), a loud, foul-mouthed and oversharing tech billionaire who lives in a palatial complex that doubles as his video game company’s offices. The heavily tattooed, perpetually shirtless and foul-mouthed Laird doesn’t really jibe with the Flemings’ more Old Navy aesthetic, but he’s convinced that he can win them over – something that Ned is adamant not to let happen at any cost.

As you can probably surmise, there’s not much new here. The entirety of the film is predicated around Laird doing something inappropriate and Ned subsequently fuming, with gags revolving either around his lavish lifestyle (he has a fancy butt-cleaning Japanese toilet; he has a moose carcass suspended in moose piss in his living room), his eccentricities (he has a right-hand man, played by Keegan-Michael Key, who assaults him randomly to keep him on his toes) and his inappropriate oversharing, all of which is met with panic and fluster by Ned. Suffice to say that this is a pretty familiar set-up for a film — though the film does eventually deal head on with the fact that two dudes squaring off about a woman with no regards to her agency is straight Ye Olde Tyme Movie shit.

Laird, by virtue of being the wild card, is the most developed character in the movie – and that’s kind of the problem. Laird’s pretty weird in a James Franco kind of way, but he’s considerably less of a confusing and off-putting figure than the film needs him to be. Conversely, Ned and his family are so vaguely defined that it’s hard to even put ourselves in their shoes. More than once, Stephanie describes her father and her lover as very similar in temperament — something that the film doesn’t really allow us to see since Cranston is stuck playing the same note of overwhelmed befuddlement over and over again. It’s one of those movies where you sort of know that it’ll end up with the two of them putting their differences aside because they’re not really differences so much as common peccadilloes, yet the only indication of that is when other characters remark on how similar they can be.

Unsurprisingly, it all goes to shit in the third act, when all the resentment comes to a boil and is resolved by a grand gesture — one, improbably, that features the intervention of Kiss. (If you need an incongruous rock star cameo in the third act of your movie to really make it pop, it’s probably a sign that the ending was a problem from the get-go.) Ironically, a premise like this one might be better served by television, where the audience would be given enough to get to know the characters and where this kind of cinematic grandstanding could be avoided.

Ultimately, though, Why Him? does contain a trace amount of laughs, easy as they might be. Key steals most of his scenes as the omnipresent, bizarrely accented Gustav (I think he’s supposed to be German, though Key takes the German accent through some uncharted territory), Mullaley rips into her one comedic set piece (in which, high as balls, she attempts to seduce her husband while he fumes about Laird) with gusto and Franco is characteristically game in a role that he could admittedly do in his sleep (and probably does). Ironically, Why Him?’s generic premise dooms it for a life on basic cable — forever stuck in that space where you start watching it when it’s halfway done, trying to remember if you ever saw this before, until the credits roll and you conclude that, yes, you have seen it. Now you’ve seen it at least twice. ■

Why Him? opens in theatres on Friday, Dec. 23. Watch the trailer here: