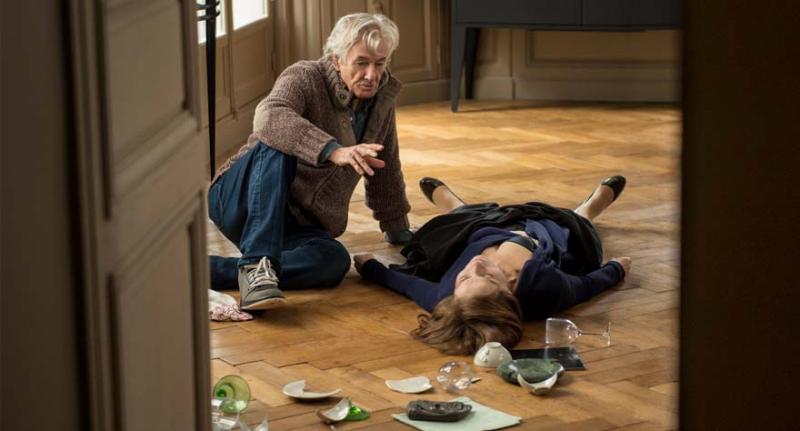 Paul Verhoeven and Isabelle Huppert on the set of Elle

The film world has changed a lot since Paul Verhoeven’s heyday. It’s difficult to fathom that the same man who made Showgirls (and RoboCop, and Starship Troopers… and Hollow Man!) is also behind one of the best-reviewed and most controversial (this part is not as difficult) films of this year’s festival circuit. (I love those movies, but they are not what you’d called “festival favourites.”) Verhoeven’s first film in six years — and his first feature-length effort in a decade — challenges every notion in the book. It’s a provocative and extremely daring film that courts controversy… or should, perhaps, court controversy.

“This has been happening for months, basically. Even before Cannes!” Verhoeven said when we spoke during TIFF in September. “They said, ‘Wow, this might be a very controversial movie!’ and I said, ‘I agree!’ (laughs) In reality, until now, I have not seen the controversy. But that might have to do with the fact that female journalists are reacting to the movie in a positive way in general.”

In Elle, Isabelle Huppert plays Michèle LeBlanc, the CEO of a successful video game company. Divorced with one grown son, she lives a relatively straight-and-narrow life, due in part to the childhood trauma associated with her father, a notorious serial killer whose heinous crimes are resurrected sporadically by television specials. Returning home one night, Michèle is sexually assaulted by a masked attacker who flees the scene. Michèle suspects the attacker to be someone she knows, and she refuses to go to the police with the crime. She instead chooses to conduct her own “investigation” and begins a cat-and-mouse game with the mysterious attacker.

“I think what the movie does, and what I very much enjoyed, was to refuse the genre,” says Verhoeven. “Yeah, there’s a thriller element, sure. Who did it? But there so many elements that you could call sociological or psychological… If you look at the amount of relationships she has, her mother, her father, there are about eight. You follow them all, and none of them are about rape, in fact.”

“I was always a great admirer of Paul’s work,” says Huppert. “He has a great ability to disturb you and to make you think. There’s always a great deal of irony running through all of his films. He’s never sentimental, he’s never too psychological, and yet there’s such an intelligence and a desire to understand. He also throws so many bridges between all events, but in the end you have a complete portrait of a woman. You really step into someone’s life and try to understand the bridges between the past, the present and the future. The multiple, almost mosaic-like aspect of the film makes it quite moving, I would say, because it says a lot about family ties and what it means to love your child. (…) Sometimes you’re in a Hitchcock film, sometimes you’re in a psychological study, sometimes you’re in a comedy, but at the end of the day you’re in none of those. You’re in a Paul Verhoeven film.” 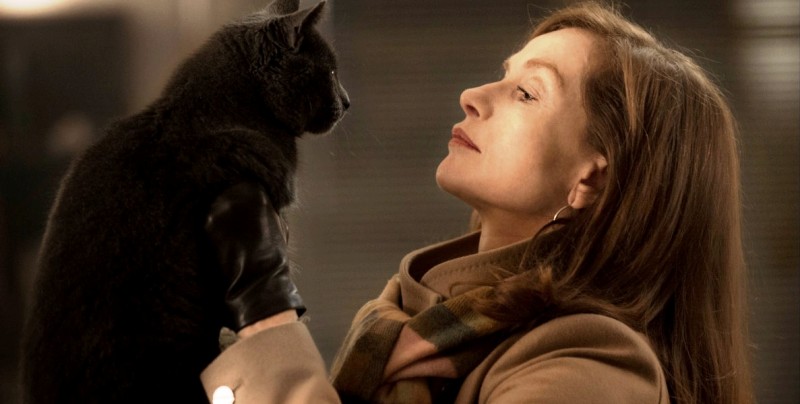 I bring up to Verhoeven that, as a man, it’s difficult to properly verbalize my feelings about a film that deals with narratives of abuse and trauma in complex, sometimes contradictory ways. “I also have a hard time to explain that, really,” he laughs. “I cannot completely feel how a woman who would look at the movie feels. But we have this top actress of the world, in fact, that basically did it, you know? And knew what she was doing! I really trusted Isabelle’s intuition. I really felt that when she would do a scene in an unexpected way, perhaps outside borders or even moving away from the script, I always followed her. If she feels that way, she can feel it better than I, and I should trust her! I wouldn’t ever say “Well, the script says…” (laughs) In fact, it’s probably better than what’s on the page.”

“He told me that he’d let me take the role wherever I wanted to take it,” says Huppert. “That might be because of the situation, so that in the end you don’t have so much of a man’s look. Although, from the start, I never thought it was a male fantasy. She’s halfway between sort of a victim and the usual sort of James Bond-ish avenger. She’s in an in-between space, which I think is very, very essentially feminine. She doesn’t borrow the weapon of a man for revenging, you know, like a James Bond girl, but she doesn’t want to be a victim. In the end, it’s the exploration of something in-between that makes the character interesting and that certainly doesn’t make the character like it was the product of a male fantasy. Plus, as an actress, I always felt completely protected by him. I never felt a sense of danger or of being manipulated by him. I always felt in great complicity with my role and myself as an actress.”

I ask Verhoeven if the casting of Huppert was, therefore, the key to the whole movie. In fact, Verhoeven tells me, this only came about when casting the film in America fell through. “In retrospect, I escaped a disaster! If it had been made in an American way, it would have been much more provocative. I can’t really explain it – I have the feeling that the authenticity and the integrity of the protagonist essentially spreads out over the movie and protects it. (…) Entrusting the film to Isabelle was, I would say, a divine step, because she only did it because no American actress would do it!”

Huppert’s performance is rather incredible, even coming from an actress who has gotten used pretty used to topshelf work time and time again. I ask Huppert how close the character of Michèle is to her real-life personality. “In a way I resent her way of being cool to what happens to her,” she says. “She’s a lot more fearless than I am; I would never live in a big house like that in the middle of Paris, especially after what happens to her. She’s not afraid and, yes, in a way, she doesn’t want to be a victim and she wants to take control of what happened to her and in that respect, I feel connected to her. It’s always the case with any character. Some parts are more telling than others, but that’s what makes it exciting. You make it up completely, you know. She’s not afraid of anything, and I’m afraid of everything, personally.”

It could be argued that Verhoeven helped usher in a certain idea of what the blockbuster can be. With films like Total Recall and RoboCop, Verhoeven was once in the A-list of big-budget spectacle films. Now that these have become the norm in Hollywood, I ask Verhoeven how he feels about watching the current wave of franchise films. “I look at these movies, of course, because there is always something from a special effects point of view that is new and makes you realise what is still possible,” he explains. “More, more, more, more is possible, so much so that people forget that there is stuff you can do normally. I follow it, but it doesn’t interest me in any way. I’ve been trying to avoid special effects from Black Book on. I thought that we can go further this way, and to me it was not that creative. Of course, I like to work with special effects, but it’s become so dominant, you know?

“I don’t understand how directors, Cameron included, can do so much shooting against blue screens. It must be so difficult, because you’re not helped in any way. It’s completely artificial, of course. It’s possible, you know — certainly, Avatar, but it must be really hard to do that. And now he’s going to do three more! I don’t know how he survives that.

“The pleasure must really be in solving so many technological questions. That is interesting, though. I certainly felt that on Hollow Man… but then, character-wise and feeling yourself in your surroundings… There is certainly a big audience for that, but I cannot believe that it will go on 10 years. It all starts to feel very repetitive, and I think we have to go back to narrative and character. But perhaps not!” ■