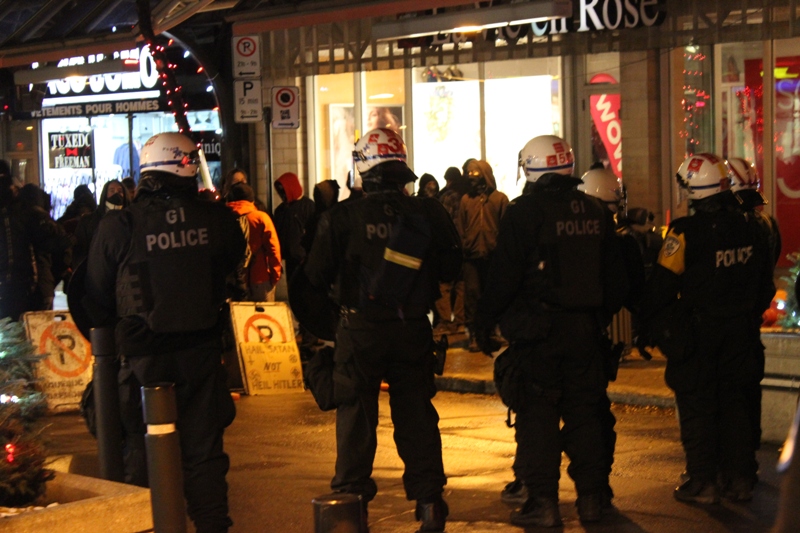 Police on St-Hubert (the sign posted over the no-parking sandwich board reads “Hail Satan, not Heil Hitler”). Photo by Justinas Staskevicius

A group of baton wielding police separated two groups at the intersection of Beaubien and St-Hubert on Saturday night. Roughly 100 antifascists sporting black balaclavas and face scarves shouted towards would-be concertgoers dressed mainly in black hoodies scrawled with the names of various metal groups.  “Nazi Scum off our streets!” chanted the protesters; “Better dead than red, you bunch of commies,” replied a member of the crowd opposing them. The standoff occurred the third night of la Messe des Morts (the mass of the dead), the sixth annual metal festival organized by Montreal record label and promoter Sepulchral Productions.

The three-day festival’s headliner, Graveland, drew heavy criticism from protestors, who allege that the Polish band (and their fans) espouse right-wing views. A small group of militant antifascists organized into a spontaneous collective, called Alerta, in order to protest the band.

“In videos we saw online, you can see members of the extreme far right doing Nazi salutes in the crowd, and we don’t think that this belongs in Montreal,” said one of Alerta’s founders, who spoke to Cult MTL before the protest (on the condition of anonymity).

Like many black metal acts, Graveland’s music focuses on Nordic imagery, but Alerta strongly believes that the band is part of the National Socialist (Nazi) Black Metal (NSBM) movement. Graveland did not respond to multiple requests for an interview, but have denied similar allegations in the past (despite their singer admitting that he himself holds Nazi views). “When people start to find out about them and question their politics, they lie or they adapt their narrative,” said the Alerta founder.

As the concert was set to begin, the word went out on Facebook confirming what those who were already there knew: “For safety reasons, we are forced to cancel tonight’s concert,” the post read. A concert organizer addressed the small crowd of would-be showgoers, advising them to stop their shouting and return home. “Na, na, na, na, hey, hey goodbye,” sang the protestors before marching off. “Graveland, aren’t fascists, get your facts straight,” said someone in the crowd, as someone else flipped off the marchers and said “Sieg fucking Heil!” before laughing.

Members of Alerta have previously organized against similar events by Sepulchral Productions in a variety of ways, including information sessions and handing out pamphlets. This time however, they felt the need to make a stand. “We decided that we would go with a protest to show our presence in the neighbourhood, and to show that this is a safe place,” said the Alerta founder.

The first two nights of la Messe des Morts saw little in the way of protest, as Alerta did not directly oppose the views of the bands playing. New Zealand death metal group Ulcerate played on the festival’s first night, and released a written statement strongly denouncing “national socialist or racist ideologies,” also stating that they agreed to play at the festival before Graveland was booked.

Alerta, however, felt that this was not enough. “They are bringing their crowd, their friends and supporters to a festival where the headliner is an extreme right group,” said the Alerta founder. “Anyone who participates in this circus, by going or by playing, is participating in this movement.” Sepulchral Productions did not respond to multiple interview requests.

As the protesters left the scene by metro, they celebrated their victory, stating that it could not have gone better. Frustrated would-be concertgoers took to the event’s Facebook page to voice their frustrations. “If you are reading this I just want you guys to know that you are the real fascists,” wrote one commenter. “I guarantee that I’ll be buying a ticket next year,” replied another. ■