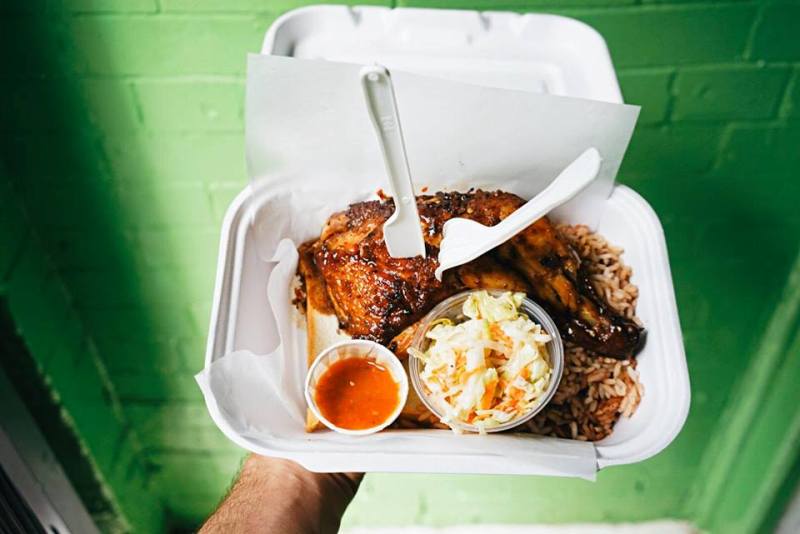 Some prefer to sweat the summer out with spice-laden proteins, but I’ll take mine as the seasons turn.

That’s what drew me to one of the Plateau’s latest arrivals, Local Jerk, the West Indian grab ‘n’ go spot that opened at the corner of Duluth and St-Laurent in June. Sure, there are plenty of long-established restos in the area serving high levels of spice, but this small spot (headed by chef Chris Heppner of Communion notoriety) adds a much-needed focus on hot foods.

The jerk cookery’s space is small, seating no more than 20 at a time, with a menu to match: Four selections of jerk-spiced food, five roti wraps, three side options and a selection of smoothies. Top that with a selection of West Indian sodas, and that’s it. For a small menu, however, any customer will find the portions to be amply generous and their accompanying side dishes to be heaped on.

My dining companion and I started with the croquettes, an appetizer with variations spanning the southern hemisphere. While fried to a golden and crunchy apex, the interior of rice and peas was lacking in flavour — let alone salt! — and relied too much on the accompanying tamarind sauce. I’d sooner recommend that first timers grab one of their doubles — a Trinidadian sandwich that fits a thick and sweet chickpea curry between two fried flatbreads — if they’re on the go.

Having had my share of jerk in Montreal, I wanted to see what LJ would bring to the table, so I ordered the classic chicken thigh. It’s served alongside rice and beans, house slaw and hot sauce, all atop a slice of Hardo bread from the pan-Caribbean bakery Island Organix on Iberville. I’d heard that their homemade seitan works well with their spice rub, and I’m tempted to make a return trip to try it, as the chicken didn’t wow. Compared to other Caribbean eateries in the city, where their jerk spices turn meat into challenging meals not for the faint of tongue, LJ’s flopped. The dish yielded more sweet and salty flavours than spice. I suppose that’s where their vinegar-leaning scotch bonnet hot sauce comes in, but I wanted to feel the heat from the chicken alone. What’s more, the chicken itself was on the dry side and a little lukewarm below the skin; surprising as I arrived not 30 minutes after they opened.

Again, I’d have to suggest an alternative: their jampacked roti wraps. The bread itself is pleasingly elastic and has a good balance of flavour, stuffed with chicken and bursting with cumin, and while it too relied on the house hot sauce to bring on the heat, it was a far more satiating dish than the namesake jerk.

I wouldn’t call this visit to Local Jerk a rousing cheer, but it provided enough supporting evidence for a second meal down the road. For those looking for a fist-banging, eye-watering level of spiciness in their food, however, you’re better off visiting Montreal’s older jerk institutions. ■