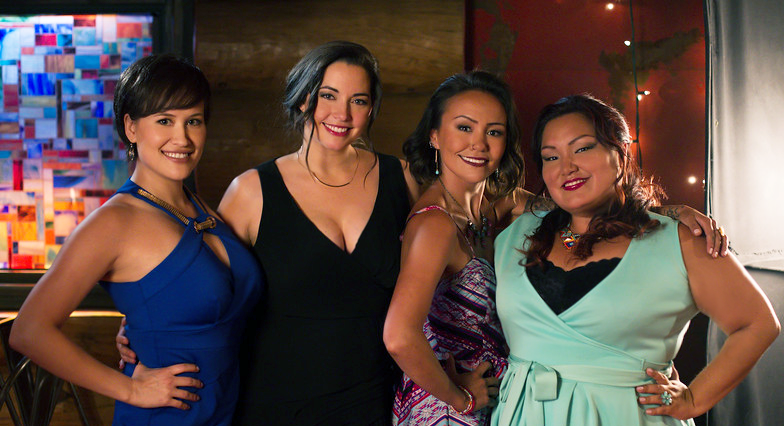 The cast of Mohawk Girls

Twenty-six years ago, the Mohawks were thrust into the mainstream media spotlight. Portrayed as angry, hateful and very dangerous by the dominant non-native media, the stereotype was set and propagated ever since. One of the more poignant photos of the Oka standoff, an image that went around the world, showed a young Canadian armed forces private facing a masked First Nations’ warrior identified as Lasagna —a Mohawk — still manages to evoke the tension, fear and stereotype. Yet, the warrior wasn’t Lasagna, and he wasn’t Mohawk. It was Ojibewa Brad Laroque, from Saskatchewan, but that info was not deemed important as it ruined the script. For the Mohawk, being under attack on their territory, it was war — with the presence of a fleet of Canadian military tanks, military helicopters and troops of Canadian soldiers roaming both Kahnawake and Oka with AK47’s, laying razor sharp wire in an attempt to prevent the Mohawk from defending or leaving their land. It was the Mohawk who were portrayed as not only being overly aggressive, but in the wrong.

Today the dangerous, angry stereotype still remains to some degree, and it’s fitting that four females have become ambassadors to combat this image in the form of a television show called Mohawk Girls — fitting because before colonialism and the imposition of Western ideals began to erode First Nations identity, Mohawks were matriarchal. As show co-creator Tracey Deer states, she is a product of that matriarchal upbringing. “Growing up as a Mohawk woman, in a community that really emphasizes a woman’s voice… has influenced me as a storyteller to want to continue to tell human stories and make sure the female voice is heard,” she says.

In the tradition of The Beachcombers, North of 60 and the Degrassi franchise, Mohawk Girls is so Canadian it hurts. The four archetypical characters bring out the good, the bad and the incredibly ugly underbelly of both Mohawks and non-natives alike. Billed as a dramedy, the show takes place in the Mohawk community of Kahnawake, on the other side of the Mercier bridge the Mohawks blockaded in 1990 in solidarity with their Oka brethren. Past the sign that reads “Residents Only,” the viewer is invited under the bridge and through the tunnel into a world they only ideated. Here, the 20-somethings deal with heavy issues of identity, racism and social injustice while trying to date and figure out who they are: modern day warriors with great hair, kinky clothes and a sense of humour.

While the Oka stand-off did expose Deer to the need for context, it was her experience growing up as an Aboriginal teenager in Kahnawake while attending school in Montreal that led to her desire to provide it. She says she felt “voiceless, invisible and unimportant” not only in her community, but in the grander context of Canada. So she made the documentary film Mohawk Girls in 2005, to find out if other teens were going through the same thing.

“The teens were dealing with all types of facets of pressures and difficulties in figuring out who they are and who they want to be and culture and family and community and societal pressure telling them who they should be.”

Deer wanted to continue engaging in this dialogue and flushing out some of the thornier issues First Nations face, thus Mohawk Girls the show was born. With it, Deer and co-creator Cynthia Knight manage to educate and inform without being pedantic or preachy by way of airing dating truths in situ.

By her own admission, Kahnawake is a complicated place, with a lot of baggage. The Indian Act has done few favours for Kahnawake, and is plausibly at the root of the blood quantum membership law and the marry out/get out rule. Divide and conquer was long the MO of the Indian Act and Canadian government in general, with the aim of ridding the country of the “Indian Problem,” and its legacy, like other western ideals, is still kicking. The proof is in the puddin’ as it is what continues to propel Kahnawake and the Mohawks into mainstream media. It’s an issue that has led to factions within the community and families, and has erupted in violence. On this, Deer doesn’t mince words about her feelings.

Mohawk Girls, like other great Canadian shows, fills a much needed niche on television and does so in a way that Little Mosque on the Prairie did: by targetting two audiences. “Our Aboriginal audience is paramount and we hope to be pushing boundaries and making people uncomfortable and motivating dialogue on all of these different things that we are dealing with as communities. All of these issues are woven throughout the story,” Deer says. “Our other audience is Canadian. We want people to have a better understanding of what we’re going through, to understand why we are currently in the positions we are in now. It’s so important to understand the context and to not judge based on limited information. We hope to challenge both audiences.”

Perfectionist eager-to-please Bailey, insecure flirty full-figured Caitlin, driven type-A lawyer Zoe and free spirited “mixed blood” Anna provide a wide gamut of personalities and situations for native women to see in themselves and their lives. As the show reflects communities where men greatly outnumber the women to the point where they don’t even have to pretend to be good guys to “get the girl,” Deer hopes that it motivates women to reflect on their own relationships. “The one thing we do have control over is what we (as women) will put up with; making sure we get what we want and what we deserve. I hope women are asking themselves, are they with a Butterhead (sleazy player) or a Thunder (upstanding teacher/peacekeeper) — who do they want to be with?”

Removing the so-called “race card,” Deer say that “the four main characters of this show are on a quest that everyone can relate to in terms of ‘who am I’ in this bigger world and ‘who do I want to be,’ and with all the pressures around telling you who to be and who not to be.” In many ways, the setting could be any small community in Canada where people face scarcity of employment, rumour mills, cliques and an incredibly shallow dating pool. That it takes place in a First Nations community, especially one of the most notoriously feared and misunderstood, is unprecedented. A generation ago, the Mohawk were blockading bridges to get their point across; now they are using the very medium that ingrained the stereotypes to reverse them and build bridges.  As Deer emphasizes, “It’s about a human experience. We’re all human and we shouldn’t be on opposite sides of the line.” ■