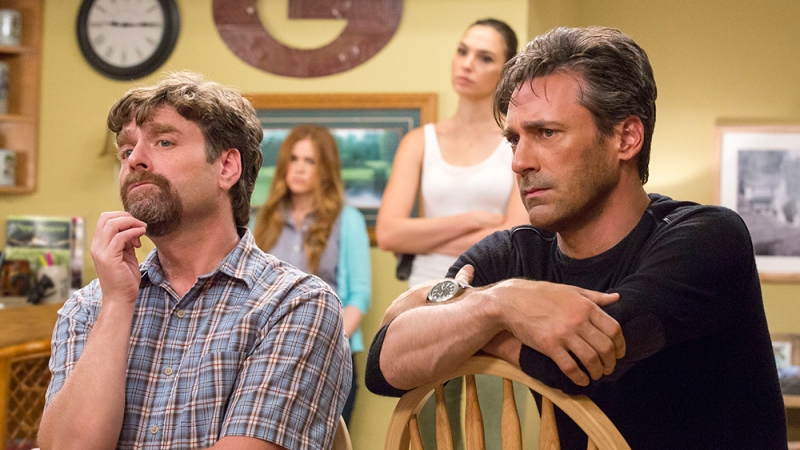 Of all the recent overnight successes 10 years in the making, it seems like Zach Galifianakis took to fame sideways.

Even though he’d been a working comedian and actor for well over a decade when he landed the part in The Hangover, that film’s unparalleled success made him an A-list comedy star overnight — and yet he’s almost never capitalized on it. He took supporting roles, leads in indies, appeared in the contractually obligated Hangover sequels, continued doing weird TV that almost certainly wouldn’t have happened without his box-office clout and generally avoided the kinds of projects that A-list comedy actors inevitably find themselves doing.

The two times he’s come closest to that (Due Date and The Campaign), he shared the spotlight with another enormous A-list star. The key to avoiding Galifianakis fatigue, it turns out, was sharing the spotlight.

Hollywood logic dictates that, as Galifianakis is the most famous male actor in Keeping Up With the Joneses, the film is therefore a Zach Galifianakis vehicle. That’s not the case; in fact, the biggest strength of this film that often otherwise feels like a dusty relic of late 1980s is that it really does have four comedic leads that are each given a similar slice of the joke pie.

Its strength certainly isn’t in its concept, which centers around Jeff and Karen Gaffney (Galifianakis and Isla Fisher), a buttoned-down married couple who live at the end of a peaceful cul-de-sac in suburban Atlanta. Having sent the kids away to summer camp, the Gaffneys are about to settle down for the hedonistic bliss of popcorn and DVRed episodes of The Good Wife when a mysterious new couple moves in across the street. Tim and Natalie Jones (Jon Hamm and Gal Gadot) are mysterious, chic, good-looking and friendly, though they don’t blend particularly well into the khaki-pants conservatism of suburban life.

As a bromance grows between the dweeby Jeff and the debonair Tim, Karen discovers that the Joneses are hiding a very, very big secret: they’re international superspies working undercover to find a mole at the company Jeff works for – and the Gaffneys factor into their plans in a major way.

That summary sounds like something you might see on the lower half of a drive-in bill with The ‘burbs in 1989, and in truth the film’s big action/comedy set pieces don’t show that much inventiveness, either. (Tim takes Jeff to a sketchy underground Chinese restaurant where they eat cobra; Karen tracks the statuesque Natalie right into the lingerie department of a Bloomingdale’s, after which some very mild underwear shenanigans ensue; a shootout occurs in the very picturesque setting of an abandoned warehouse.)

It’s one of those plastic comedy premises that never really quite gel organically and continue to sit on-screen like exactly what they are: a comedy premise. (Director Greg Mottola has clearly become more enthused with high concept comedies over time – this hardly seems like it was made by the same director as Superbad and Adventureland, though he acquits himself nicely with the more action-oriented aspects of this film.)

That having been said, comedy premises are very good at one thing: setting the stage for comedy. A lot of Keeping Up With the Joneses revolves around the “WHAT IS EVEN HAPPENING RIGHT NOW?” school of panicked protagonists as Galifianakis and Fisher lose their minds in nearly every scene, and hitting that same note over and over proves to grow rather repetitive.

Thankfully, the leads have a good rapport, and Hamm and Gadot toe the line between functional straight counterweights and comedic buffoons rather well. It’s particularly fun to see Hamm and Galifianakis (who have apparently been friends off-screen for years) play off each other, while Gadot shows comedic chops beyond showing up out of nowhere to chuck a lasso at a lava monster with Batman and Superman.

Keeping Up With the Joneses is mostly pleasant without being particularly memorable. There are really like two jokes that I thought were truly great in the whole film, and neither of them are particularly funny out of context. (One of them involves Galifianakis throwing an onion.) No great comedies have ever been anointed as such based on their premise, and Keeping Up With the Joneses never really gets past how mechanical its premise is.

It’s no great shakes, but the generic, slightly unmemorable high concept comedy is a required stepping stone to A-list comedy star canonization, so it can’t be that surprising that this film is exactly that, shared spotlight or not. ■

Keeping Up With the Joneses opens in theatres on Friday, Oct. 21. Watch the trailer here: