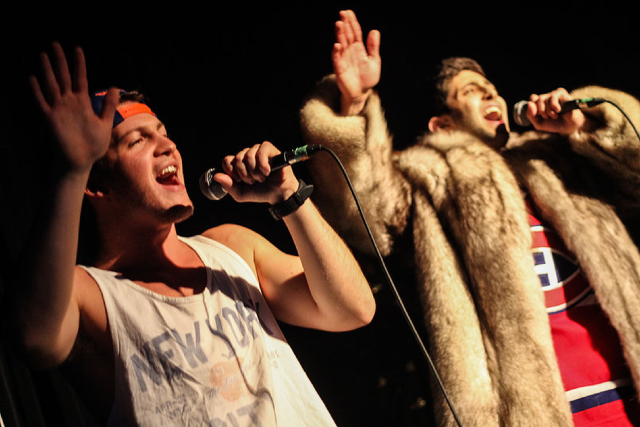 In addition to being a line you might hear being rapped from the stage at the event, LL Cool J spitting, “Don’t call it a comeback, I’ve been here for years!” is a bar that also bears truth in regards to the current status of Hip Hop Karaoke Montreal.

Beginning in New York and later finding its way to this city in 2011, the event gathers those from all different walks of life to unite over one common theme: a love for hip hop.

“I first went to HHK with Hannibal Buress a few years ago during Just for Laughs”, says Olivia Benaroche, current Hip Hop Karaoke organizer, who doubles as a programming coordinator for the iconic comedy festival. “It was a real eye-opener to an entire subculture I was previously unaware of.”

Of course, this was also the night in which Buress performed his notorious rendition of Snoop (Doggy) Dogg’s 1993 classic, “Ain’t No Fun,” which to this day remains one of the most viewed performances on HHKMTL’s YouTube channel, and is regarded as a fan favourite. Other notable surprise guests over the years have included MadTV veteran Matt Braugner, locally loved rapper/Concordia teacher Narcy, and hometown hero Kaytranada, an early supporter of the events.

Thursday’s edition of HHKMTL marks the first in over six months. Benaroch cites both her busy job and the lack of substantial financial return from the events among the reasons for not having the event run more frequently. “It would just be too difficult to juggle so many things around at once”, explains Benaroche. “There’s a lot of people who love it though, and as long as that continues to be, I’ll continue to run it.”

But why exactly do people love it so much? “It’s a chance for people to break out of their norm,” says Benaroche. “You can have women in their 40s with children who come out for the night to rap their favourite Eminem song!”

She believes that Montreal’s hip hop scene has its ups and downs when it comes to the event. “[The community] is so tightly knit and at the same time such a niche market, so it definitely has its perks.” ■