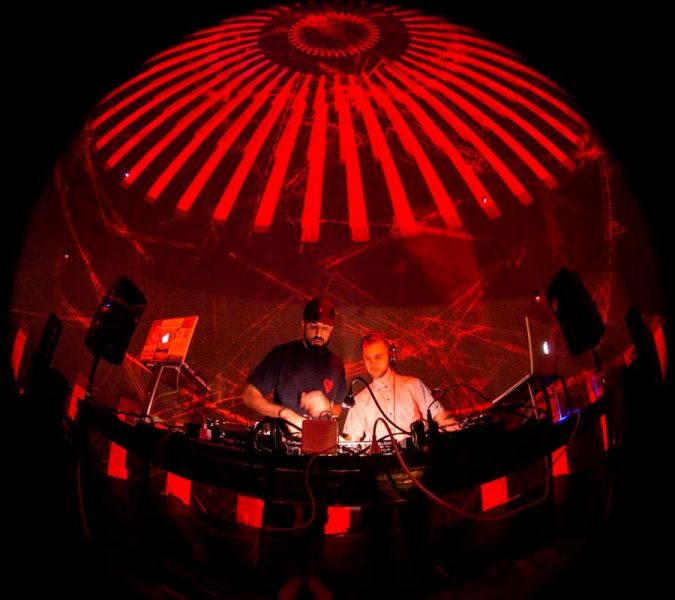 Boogie monsters Dr. MaD and Walla P make their names individually together across the city’s nightlife scene as music connoisseurs with a knack for filling a dancefloor, but when they come together, it’s a monthly Voyage Funktastique, which celebrates its third anniversary this weekend.

We spoke to the pair by email about where they get that funk from.

Darcy MacDonald: How did you both meet? And ho has been spinning longer?

Walla P: We met at a Slum Village concert at le Belmont, circa 2012. I remember going up to MaD and tell him that I played a load of his beats at NXNE a few weeks earlier. I’ve been spinning for roughly 10 years.

We had a friend in common who introduced us to each other. I think Walla heard of me thru my beats I’d put online.

I was in L.A. with my homie Vincent in 2012. He had a radio show named Bass Culture. We were at a Stones Throw party. They were playing strictly funk. I told Vincent we needed something like this in MTL too and I’ll make it happen when I get back. I guess Walla told Vincent he had the same idea. So he basically put us in touch together.

DM: Did you grow up around parents/siblings/family vinyl collections?  And if yes or no, where did your own love of wax begin?

P:  My mom had a good record collection, mostly rock, 80’s pop, reggae and jazz. I really got into wax when I started focusing more on producing, and I’d sample anything I’d put my hands on. Even borrowed some of my mom’s records, and obviously never gave them back.

MaD: My mother had a small vinyl and 45 collection back in Algeria. It was mostly french music, classic and a couple of ’70s soul records.

I really discovered the vinyl culture thru hip-hop and the art of sampling. This is when I started collecting more and more. It got bigger when came the time to collect funk records to play for the people.

DM: When you began VF what was your mandate and how did you aim to distinguish yourselves from other vinyl/soul/funk type nights around town, past or present?

MaD: Time travelling. From the ’80s to the future. We really wanted to play some unknown/forgotten sounds for the people. My favourite thing to do in life is, “Oh you don’t know that shit?”, play it for the people and watch their face. Or “Do you remember that joint?” It’s inevitable for us.

We’re all about the ’80s boogie funk. No James Brown, no Sly & the Family Stone — we clearly wanted that BOOM CLAP on the dance floor that’ll slap your face with a nasty bass line on top of it. That was our only direction. For the rest, we can travel through time and genres. From g-funk to future funk to whatever is influenced by that sound.

P: I think we both wanted to have a funk night similar to the ones we’d heard about down in Los Angeles (DâM-FunK’s infamous Funkmosphere night) and San Francisco’s Sweater Funk night. We weren’t aware of any other nights like that in Montreal, except for WEFUNK’s monthly at le Bleury, in which their musical spectrum was more leaning towards ’70s funk, breaks, rare grooves, hip hop and some ’80s funk. We should also mention the Goods, where they played some boogie, too.

Montreal has been described as the second biggest Disco city in North America, and disco is not too far off from the boogie funk era that followed the downfall of disco in the late ’70s/early ’80s. If you add the rise of modern funk to the equation, the timing was just right to try this concept.

DM: What has changed over three years?

P: We started at les Bobards, and moved to le Bleury in April 2014. We’ve noticed that our crowd has significantly grown with us, and that their musical taste for the Funk has gain in depth; they want to hear more obscure songs than when we started.

DM: Do you dig together?

MaD: We even live, cook and brush our teeth together, so yeah. Except when we travel apart maybe. He loves Toronto. I did some great diggings in Sao Paulo, too. It really depends.

P: We mostly dig together when we are abroad, rarely while we are in Montreal. We like to dig for each other though, knowing both our respective catalog really helps when you find something that the other is desperately looking for.

DM: What individual music/creative projects are you each working on now?

MaD: (I’m) finishing an EP with someone you’ll soon hear of, R&B vibes all around the place. Also producing/co-producing some joints here and there for people I really enjoy working with in Montreal.

Other than that we want to take the VF radio and the releases to a next level!

P: I’m focusing more and more on the administrative aspect of the platform, conjointly with pushing Voyage Funktastique to another level; there’s some vinyl pressings in the works, recruiting upcoming talents for the label. There’s also the merchandise aspect of VF that needs to be in the forefront.

DM: What’s in store for Saturday’s anniversary? Any treats you can reveal?

P: For Saturday, we’ll decorate le Bleury the best we can, we’ll have some goodies, along with Marley C’s special treats, like he always has. We also have a guest set from a dope DJ from Michigan, J-Beez. We plan to really funk the house to a level we’ve never reached before. I guess people will have to come (early) to witness the infinite power of the funk.

MaD: I think it’s going to be a great time to celebrate and play our favourite classics that gave VF its identity. A couple of joints we stopped playing for a while just because it was too predictable.

Then who knows? If some vocalists show up we might improvise our sets like we usually do with them. Meryem, Malika, Fredy, Smitty… I see y’all! ■