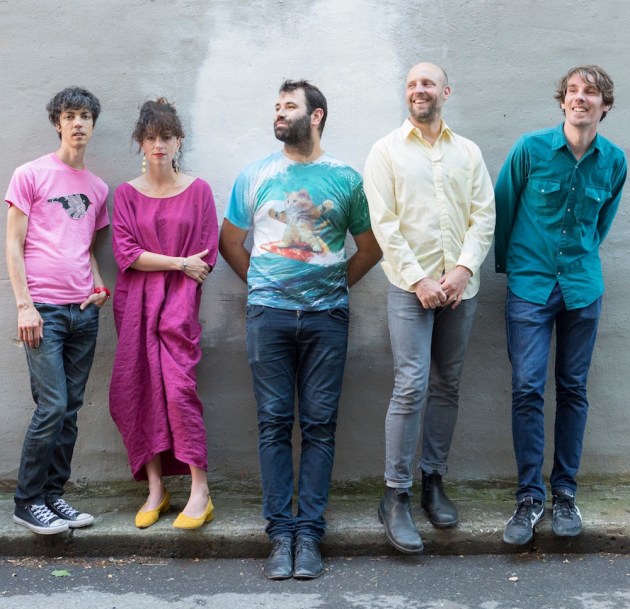 The Luyas. Photo by Richmond Lam

The Luyas are back.

Four years after their Animator LP, a five-track EP called Says You was released last Friday by Paper Bag Records, heralding the return of a local band that has spent most of the past decade crafting, breaking down and reconstructing an atmospheric, experimental pop sound that always emerges as distinctively their own.

“I change my mind all the time about what I think sounds cool, and drive my bandmates crazy,” says singer Jessie Stein. “What we really thought was important to preserve with these recordings was the way that we actually sound playing together. We’ve been a band for a long time now, and there’s something that I always liked in our demos more than our records. There’s a life to our improvisation and we did a lot of improvisation this time, so I wanted to have some of that feel in our (finished) recordings.

“I love Can, and I love that stuff that feels very in the moment, so when we made this record it wasn’t a specific sound in mind per se but it was more like a specific process where there would be a lot of improv involved in the takes. We wouldn’t over-construct anything. We didn’t layer things over top. There were hardly any overdubs. We did vocals and maybe one overdub per track, which really isn’t how people tend to make records anymore — people really build songs. We tried not to built or write them, just poop them out (laughs) and hope that it turns into something that’s compelling to hear. That’s what’s nice about the EP: it’s got a liveliness, it’s kind of wide-eyed.”

Can is an apt reference point when talking about Says You, not so much because of a direct resemblance, but the free space and loose feel of the production and the use of synths and horns and varying rhythms rather than traditional indie rock arrangements and patterns is reminiscent of that experimental space that seemed to open up for krautrock, post-punk, no wave and proto-hip hop and electronic bands in the mid to late ’70s.

Fortunately the Luyas have more music coming to follow these five songs, which were packaged together from a much larger batch of recent recordings. The band considered releasing a double album, but opted instead for an EP with an LP to follow sometime in the next year or so.

As for where the Luyas are as a band, Stein says she’s feeling “poetic” about their current status as an art project rather than a commercial one. She’s spent the last few years finishing an urban studies degree, working a day job and spending time in NYC, a break that allowed her to delve back into the band (and into Montreal) refocused.

“It feels good to have had a moment to do some other things and to come back at music in a fresh way where I’m excited to do the work and I feel optimistic about it and also have no illusions about what it’s gonna mean. It’s a cool place to be in, and a lucky position to be in.

“Music has become more of a passion project for me because it hasn’t been my job. I haven’t made much money at it, which has actually made it beautiful for me again. Sometimes when you’re just doing a gruelling grind, it loses some of its direct deposit of joy.”

Stein is excited to get back on the road with her bandmates Pietro Amato, Stef Schneider, Michael Feuerstack and Bucky Wheaton after a long period of sporadic performances. The Luyas have embarked on a 15-date North American tour including two Montreal shows, the first happening this Saturday as part of POP Montreal.

“I’m excited to play more and to get to hang out with my bros,” Stein says. “We do hang out anyway but there is something special about sitting around in a van with your pals. It’s an atypical adult relationship, a really close friendship that happens when you sit on top of each other for a long time.

“Making work together means a lot to us. It’s become really clear to me how important my relationship with my bandmates is and how great it is that we get to do this thing together because we decide to. Being in a band is essentially an incredibly quixotic notion — it’s really dumb. It’s a silly way to make a living, and it’s a pretty hard thing for your personal relationships at times, but if you can set it up right where you’ve got the right people in your life who understand it and you can make it sustainable, it’s such a beautiful thing to do with your friends, and such a beautiful thing to offer whatever community — large or small — that’s interested in receiving it.”