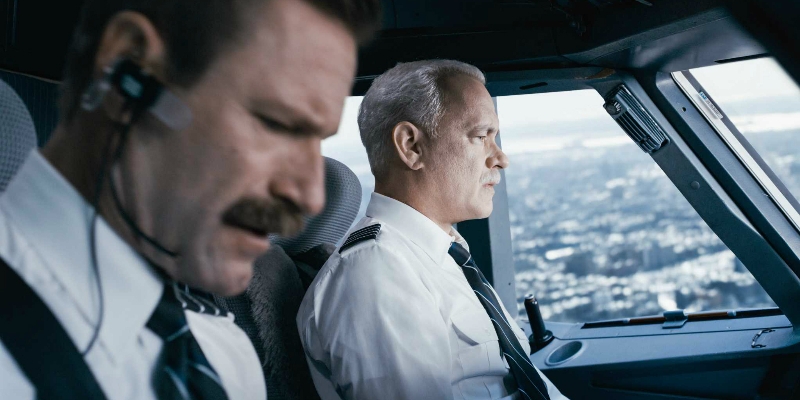 Teetering on the edge of misery and sentimentality, Clint Eastwood’s Sully bemoans an age where hero worship is dead. A true story about pilot Chesley Sullenberger (Tom Hanks) — who, in 2010, guided a plane into the Hudson River, saving everyone on board — the film explores the aftermath of the event as investigators attempt to tear apart the hero narrative. Not wholly misplaced, the film seems to ask what happened to the American social climate, where we tear down a hero before they can be built up into something worth believing in.

In a cultural landscape where the only real heroes wear capes on the big screen, it does sometimes seem that we as a society give more leeway for imperfection to the heroes we create than the ones that live among us. For better and worse, Eastwood’s portrait of Sully reeks of sincerity, cherishing old American ideals of stoicism and frontier heroism. Gone are the High Plains — in spite of his propensity for revisionism in his treatment of the myth of the American West, Eastwood does seem to yearn for a simpler time.

Sully’s most thrilling elements happen above New York City, as we are treated repeatedly to different versions of that fateful morning both real and imagined. Not all the visual effects quite work, but the orchestration of sound, movement and character makes it easy to get lost in the unfolding horror of a crashing commercial flight. As seen from above, the city’s skyline is more of a frontier than an urban animal, and as the plane makes its ascent, Sully comments that the city is so much more simple from above. As seen from the ground level, New York is portrayed as a damp and claustrophobic series of veins and arteries, oppressive and anxious to the former small town boy.

The film works best in quiet moments of reflection. Tom Hanks’s performance as Sully presents him as a man uncomfortable with fanfare and unable to take credit for merely doing his job. Moving from one media interview to the next in the days following the incident, he holds himself awkwardly, his fists clenched and his heart sitting somewhere near his feet.

A series of ongoing phone calls with his overwhelmed wife played by Laura Linney reveal a man uncomfortable with expressing his emotions and hung up obsessively on details. While easily one of the best actors of her generation, she always gets pigeonholed as the anxious wife or mother and her role within the film serves as a tangled source of anxiety and not much more. Her role is particularly thankless here, and the writing and direction don’t do her any favours. A last-minute phone call before the final investigative hearing throws much of the film’s goodwill away, coming across as cloying and insincere. That may have been true to what actually happened, but the moment feels thrown in and rushed through on screen.

Lying close to the film’s surface seems to be the frustration of having your life judged by a single moment rather than the sum of its parts. While ostensibly a biopic, replete with various flashbacks to Sully’s youth, the film’s form argues against sweeping judgments based on incidents that last only a few seconds. Hero or not, Sully has been piloting airplanes for over 40 years and will come to be remembered only for the flight where things went wrong. The media’s role in this seems particularly pointed and the press doesn’t come off particularly well.

Journalists and television personalities are given a soulless energy in the film, outmatched only by the investigators looking for a reason to blame Sully for the plane’s failure. While Sully himself seems immune to pinning his own struggles on the world around him, Eastwood doesn’t have the same squabbles, doling out servings of disdain for politicians, pop culture, journalism and corporations. He seems to divide the world into people and stereotypes, only barely evading misanthropy by showcasing the best of human ingenuity and cooperation, as well as what he sees as the parasitic habits of just about everyone else.

Sully makes for a great cinematic experience, if only for the gripping scenes of the lead navigating an impossible situation and surviving. Refreshingly, the film doesn’t pin this on a miracle but instead on the hard work and lifelong dedication of Chesley Sullenberger. Hanks does the role credit, though the entire film does occasionally focus too deeply on greying misery than anything else. ■