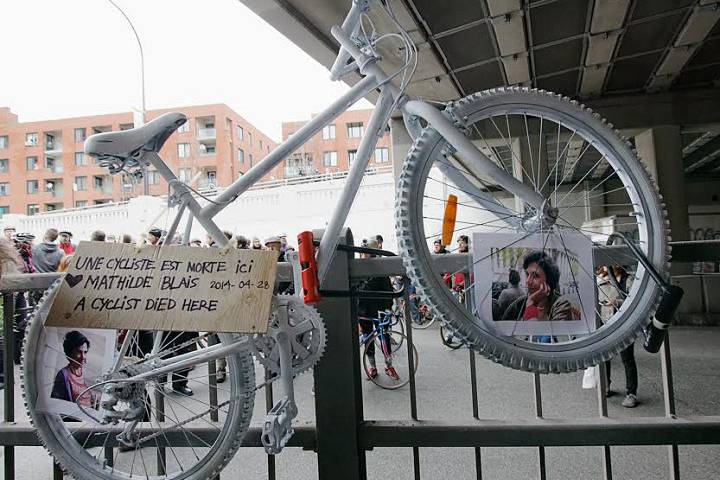 A ghost bike marking the spot of a cyclist fatality

“One death is one too many,” Montreal mayor Denis Coderre said Wednesday as he announced a series of measures to improve safety for cyclists and pedestrians on Montreal streets.

Coderre called the plan “Vision Zero,”  named after a Swedish traffic safety program whose objective is to eliminate traffic fatalities. Edmonton, Toronto and Vancouver have announced similar goals, as have a dozen major U.S. cities.

But for opposition party Projet Montréal, what Coderre announced Wednesday was “Zero Vision” or, more precisely, a rehash of previously announced measures, many of which were included in the city’s 2008 Transport Plan but have yet to see the traffic light of day.

Of the 57 underpasses identified as dangerous for cyclists following the death of Mathilde Blais in a St-Denis Street underpass in 2014, the city has only modified two of them to incorporate protected bike lanes, PM interim leader Luc Ferrandez noted.

“The only safety measures that have been implemented are those set up temporarily by the boroughs. So far, the city has satisfied itself with these temporary measures, which it has made permanent. Only two underpasses in the entire city have really been transformed.”

Almost as if it wanted to highlight its own inaction, the city yesterday identified the 10 most dangerous intersections, none of which have been targeted for significant changes in infrastructure.

Coderre may have adopted the slogan of Vision Zero, but his administration’s track record shows that it’s not much interested in adopting its key ethical principle:

“Human life and health are paramount. According to (Sweden’s) Vision Zero, life and health should not be allowed in the long run to be traded off against the benefits of the road transport system, such as mobility. Mobility and accessibility are therefore functions of the inherent safety of the system, not vice versa as it is generally today.”

Coderre has instead often set himself up as an adversary of efforts by Projet Montréal to introduce traffic-calming measures in the boroughs it controls, including Plateau Montréal, where Ferrandez is the borough mayor. The Plateau is not only a popular choice for residents, it’s a transit point for huge volumes of traffic on major north-south arteries that dissect the borough from Parc to Papineau. PM wants to see speed limits on those arteries reduced to 40 km/hr but says the central city has been blocking its efforts.

If concern for human life was the driving force behind city traffic policies, you’d also have expected a little more movement on the 2008 Transport Plan measures to control truck traffic in the city. Heavy vehicles have been involved in most of the pedestrian and cyclist fatalities in recent years, but there’s been little talk of restricting their operations during hours or in locations identified as high risk for accidents.

If dump trucks were pit bulls, Coderre would have had them exiled from the city, but he has instead chosen the route of least resistance: the issue will be referred to a committee that will report back some time before the next election.

In fact, the central city’s only real contribution to traffic calming — aside from street closing for sidewalk sales and street festivals — has been the ongoing Orange Cone fest, which unfortunately comes with a whole new set of dangers for cyclists and pedestrians forced to navigate obstacle courses that often drive them right into traffic.

If Coderre was serious about saving lives by improving traffic safety, you wouldn’t find the proof in yet another press conference, you’d find it in the city’s three-year capital expenditure plan, where it lists all of its major infrastructure projects. You’d find it in plans to restrict truck traffic, plans for more protected bike paths (not just more painted lines for bike lanes) and more support for traffic calming in the central city.

Instead, the city’s latest announcements contain few concrete measures; once more, we were treated mainly to promises to study, consider, evaluate and examine measures ranging from reduced speed limits to new four-way stops to truck restrictions.

These measures don’t need more study, they need action. Coderre has had three years to come up with a plan, yet all he’s proposing is more planning. Contrast that with all of the flyée, improvised and downright stupid projects he has put forward, from a $40-million project to light up the Jacques-Cartier Bridge to bars open 24 hours to forcing a dress code on city cab drivers to banning pit bulls to turning Île Ste-Hélène into a mecca for funereal rites to meddling in the city’s thriving car-sharing businesses.

Obviously, the mayor’s not afraid to spend a little money, as long as he can count it as part of next year’s celebration of the city’s 375th anniversary celebrations. So here’s my proposal: scrap the bridge lighting plans and instead use the $40-million to render 20 of the most dangerous intersections and underpasses safer for city cyclists and pedestrians.

It might not be as pretty, but as the mayor says, “one death is one too many.” Let’s consider the lives these changes will save as a much better contribution to the city’s legacy than disco lights over the St. Lawrence. ■