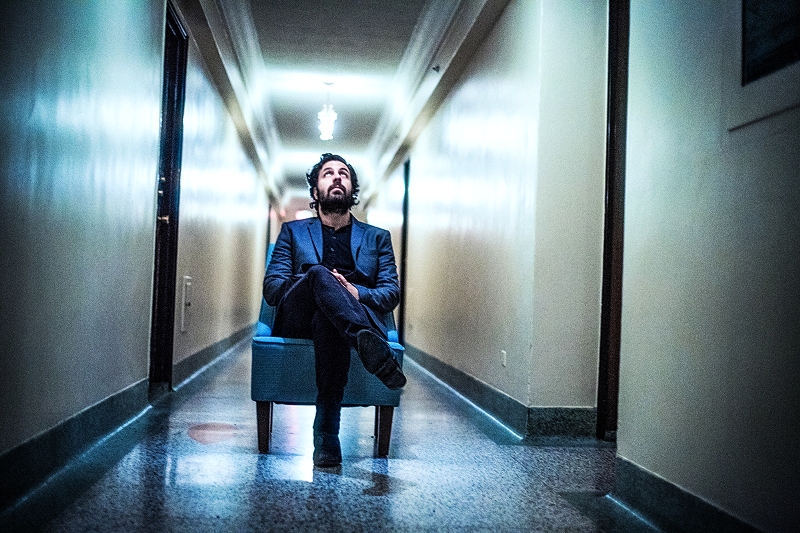 After attending the funerals of nine loved ones in the span of 18 months, and enduring a heart wrenching break-up, Patrick Krief had many a mournful muse to turn to for his new album, Automanic. This will be the first double album (divided into two portions, Automanic Red and Automanic Blue) for the singer-songwriter, who writes and performs under his last name as a solo artist, and is also known as the guitarist for the popular Montreal indie outfit the Dears. He’s described these two records as having a tone and intent as different as those expressed on Thursday nights and Sunday mornings.

Below, he tells us more about how working on this music helped him triumph over tragedy.

Kyle Mullin: I read that you recorded this album after a break-up and after mourning the deaths of several people that you were close to. You also recorded part of the album at Studio Bottega, located on an alpaca farm in Kelowna, which sounds quirky and surreal. Can you tell us more about how all that unfolded?

Patrick Krief: Recording at Bottega was great. It was just the two of us at this house, on a farm. In the morning we’d get up, have our coffee and golf-cart over to the recording area. The only interaction we had was with the engineer, and on the first day he realized I could engineer it myself, so he just stopped showing up. If we wanted anything we’d have to drive into town. We were really isolated, so it forced us to get into the music. It was a very cathartic, amazing experience. I experienced a level of isolation where our phones didn’t work, we had to go back to the house to email someone — it was amazing. I don’t think I could make an album any other way now.

KM: Because there were no distractions?

PK: Yeah. You’d step outside, get some air, it’d be super dark at night, and the isolation really forced us to bond as friends and focus on the music. It led to a lot of talking about what was going on in my life, too, which was super helpful. In a more conventional setting I’d be more easily distracted, and I’d go back into my apartment and realize things are different and people were gone or had passed away. So there were also no reminders of what was going on. It was a more positive environment to make the record, which is why I feel like the record is positive, because it easily could have been a record about a guy crying into his beer. But I didn’t want to make a negative record.

KM: You were more interested in making triumphant music?

PK: That was what I was interested in, absolutely. It was more about understanding your own role in your unhappiness, which was a big thing for me to confront, because a lot of things going on in your life are there by your invitation. Then there are other things you can’t control, like death, so a lot of it was about where to focus your energy. It sounds clichéd, but I got a huge life lesson in a big dose: nine deaths in 18 months. Every month and a half I was at a funeral. It was pretty intense.

It put a lot of my other problems in perspective. I realized “I don’t need this shit.” You realize, when you lose someone, that it can all go away quickly, so you have to make decisions about who’s in your life and what you do with your life. That’s of course easier said than done, but that isolation at Bottega helped me to understand that. Being alone and away from certain things helped me see what I had to do.

KM: When you mention going to so many funerals in 18 months — these tragedies weren’t related? They were coincidental?

PK: They weren’t connected, and ranged from people I was close to and others who I didn’t know as well, but they all had a significant role in my life. Most of them were due to cancer. One of them was a tragic accident, and some of it was just people in a certain age group where you wouldn’t be surprised that that happened; one of them was my grandmother, who was 105. It was like a clean-up — all these fixtures in my life, gone. Then there was a friend of mine who died in an explosion. It varied. I have been sheltered from death my whole life, then in one year, here’s this big life lesson.

KM: Did it change how you write your lyrics?

PK: I write the words last, so I did the melodies and it was a matter of plugging words in. It’s always the same approach for me: I want to get personal with my lyrics. It’s the only way I can somehow justify singing. I express myself better on guitar and can’t express myself very well when I’m singing unless it’s really personal. I have to go to a place of meaning. I always think of that Willie Nelson line: “You can’t make a record if you ain’t got nothin’ to say.” That’s absolutely true for me. For this record, I had more than enough to talk about.

PK: Yes, but I set out to make a double record from the day all this started. I was in a furiously prolific written moment. I saw 50 or 60 songs stacking up, each falling into one of two categories. I managed to narrow it down to 10 songs for each. A lot of people tried to talk me out it, because you’re not supposed to make a double record in 2016.

KM: Is that because the industry is more driven toward superficial stuff? Or is it that people don’t supposedly have the attention spans that they used to?

PK: Dave Hamelin, a friend of mine who was in the Stills, told me “People can’t make it through the 30 seconds before the chorus, and you want to make a double record?” Anyone making a record now doesn’t give a shit about those kinds of people though. People who love records, this is for them. I think of myself as a fan of music, and when a band I love puts out a double record I’m always super excited about it, and that’s what I wanted to give to anyone that gives a shit. And it’s still highly filtered, it’s not like I didn’t do any quality control. I wasn’t thinking: “Everyone needs to hear all my ideas.” It got filtered down a lot; there’s many songs sitting on the cutting room floor.

KM: You mentioned your friend from the Stills just now, and you seem to have a lot of other friends in the Canadian music scene like Maia Davies and Sam Roberts, who both sang backing vocals on this new album.

PK: Well Maia and I have been friends since we were 14 years old. We first did a gig together in 1994. We go way, way back. She’s been singing on my records forever. For her it was a matter of cooking her dinner, inviting her over. She’s so accurate and intuitive and creative. It was a good opportunity for us to catch up and hang out.

And as it happened we opened for Sam awhile back. He’s a friend, and when we were touring with him we tried out the new song “Life As It Happens,” and he said “That song dude. That fucking song.” I wasn’t sure about the song until then, and he really encouraged me. And at the last minute I thought, “We should get him to lay something down.” So I sent him the track, he laid it down at home, and he sent it back to me. It was pretty fun for me to hear, because he’s a friend but also because I’ve been a fan for quite awhile, so that made it fun for me to hear his isolated vocals, and realize, “Holy shit, he’s that good.” You could hear him lay it down in one take, no pops or cracks or Auto-tune. It was really fun. It made sense, I can see why he liked the song in the first place, because it has a vibe that’s familiar to him.

KM: Why were you hesitant about the song before he gave you that compliment?

PK: Basically anytime I write a song I’m walking on a line thinking it’s a piece of shit or totally brilliant. And it can be something as simple as adding a tambourine track, and then I think it’s amazing. I wasn’t feeling good about the song as we performed it, but my bandmates kept telling me it was the best one I had for the album yet, even though I wasn’t sure, and when one more opinion came in it made a big difference. One more opinion from someone I respected tipped me over.

KM: You must be looking forward to playing this new song and others live.

PK: Definitely. We’ll be launching the album at le Cabaret Lion d’Or. We’ve done that for the past three albums. I really like the room, it’s almost theatrical, it doesn’t feel like your average venue. This show will feel like a wedding, we’ll be inviting our close friends and family to come see this thing we’ve been working on. I know from experience when the show’s over and you’re walking offstage, you get an incredible high from that.

KM: That high you get coming offstage, that joy, seems very well earned given all that you’ve been through recently.

PK: I feel like I’m in a good place now. I don’t feel like I’m getting some sort of reward. I already feel like I’m over that, I’ve made a lot of changes in my life, things are good and this is just part of enjoying it. I still feel very fortunate to be playing music in front of people. ■