Joseph Gordon-Levitt steps into the shoes of divisive American whistleblower Edward Snowden in Oliver Stone’s new biopic. The film dramatizes the story of Snowden, who became reviled by some and a folk hero to others when he revealed that the NSA had a tap on every phone and computer in America, depicting his life from his short-lived stint in the army (which he was forced to abandon after breaking both legs) through his career as a systems administrator for various governmental organizations. It also gives insight on his relationship with his girlfriend Lindsay Mills (Shailene Woodley).

Much of the pre-release hype around Snowden has centred on the fact that the film will essentially cement the Snowden story in the minds of American audiences. The fear for some detractors is that the dramatized version may stomp over the facts presented by a documentary like Laura Poitras’s Citizenfour.

“That’s the difference between watching this movie, which is a drama, versus any work of journalism or any documentary, which are all great,” says Gordon-Levitt. “Citizenfour deserved to win an Oscar. There’s another great documentary that you can watch on the PBS website that I thought was really informative and there’s endless amounts of great journalism about all of this. This movie is less about information. It’s more about emotion. It’s not a story that’s necessarily about policies or technology, it’s a story about a human being. That was the focus of it, for me. Is it a political film? Yeah. Will it be controversial? Yeah. There’s a point to be made here, but my job is to make sure that there’s a human here.”

“I loved Citizenfour and I watched it over and over and over again,” he continues. “I mean, I ripped the audio and put it in my headphones and listened to it while I slept! I think that Laura Poitras made a brilliant film, but for better or worse, most Americans don’t watch documentaries. (…) That’s not to say that the movie didn’t have an impact on an audience — an audience of people who like to watch documentaries. This movie is aimed at people who go to multiplex theatres. I grew up in a suburb in the San Fernando Valley where movie theatres didn’t play documentaries. Nowadays, we have more access than we did when I was a kid because we can watch them on Netflix and whatnot. My hope here is that folks who, like me, had heard the name Edward Snowden but didn’t know any of the details might enjoy seeing this story and it might spark some conversations.” 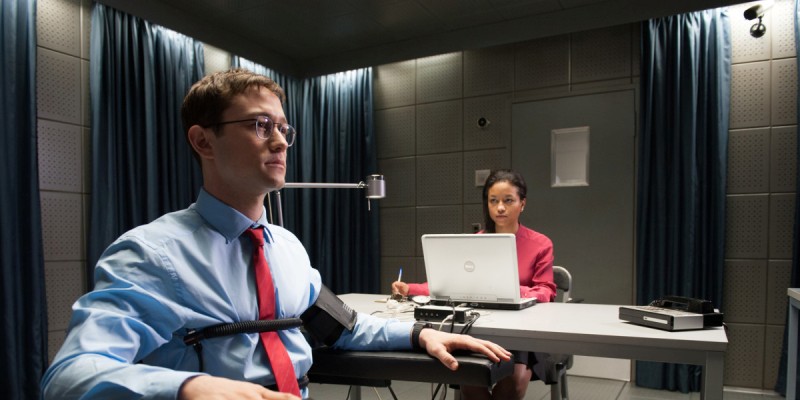 Even Gordon-Levitt was somewhat in the dark about the true nature of Snowden when production began (which happened before the release of Citizenfour and in the midst of several other high-profile governmental controversies). “When Oliver first offered me the job — after getting over the excitement of simply being offered a job by Oliver Stone — I asked myself ‘Okay, wait, Edward Snowden, I know that name, but which one is he again?”” he says. “I realized I didn’t know. I went from basically not knowing anything about him to spending a bunch of time learning about him. It’s interesting — if you Google Edward Snowden, you get all these different opinions and perspectives, and on both sides I think they’re overly simplistic. The truth is it’s not a simple story. It’s very complicated. But we live in a culture where everyone is trying to simplify things to fit them into a headline or a tweet.”

Snowden is sort of a laconic character. He even describes himself as “kind of a robot” in the film, which provided its share of challenges for Gordon-Levitt. “It’s an interesting dynamic because Oliver Stone tends to focus on very fiery characters, very extroverted characters, you know, whether it’s Mickey and Mallory in Natural Born Killers or the guy in Talk Radio,” he explains. “Edward Snowden is not your typical Oliver Stone protagonist. He is a very even-keeled guy. That was a back and forth that we were always having, bringing that kind of intensity and drama that Oliver puts into his movies, and being faithful to who Ed is. The truth is, though, his real life story is incredibly dramatic.”

It’s also undeniable that, by making a film about such recent history, Stone takes the risk of leaving a film that doesn’t tell the whole story — because the whole story isn’t over. Snowden is currently exiled in Russia, and the next chapter in his life is uncertain. “There’s a continuing story in that we don’t know what’s going to happen to him, but this movie tells a complete story,” explains Gordon-Levitt. “It’s the nine years of his life from enlisting in the army to blowing the whistle, and that actually has the classic structure of a drama. The movie doesn’t really make any claims about what’s going to happen next, because it’s still happening. I do think that that nine-year span of his life does make for a fascinating story, and the fact that it was a real story gave me a lot to work with as an actor. Often when you’re an actor and you’re playing a fictitious character, you have to make a lot of that stuff up. (…) Whereas here, there’s someone I could ask.” ■