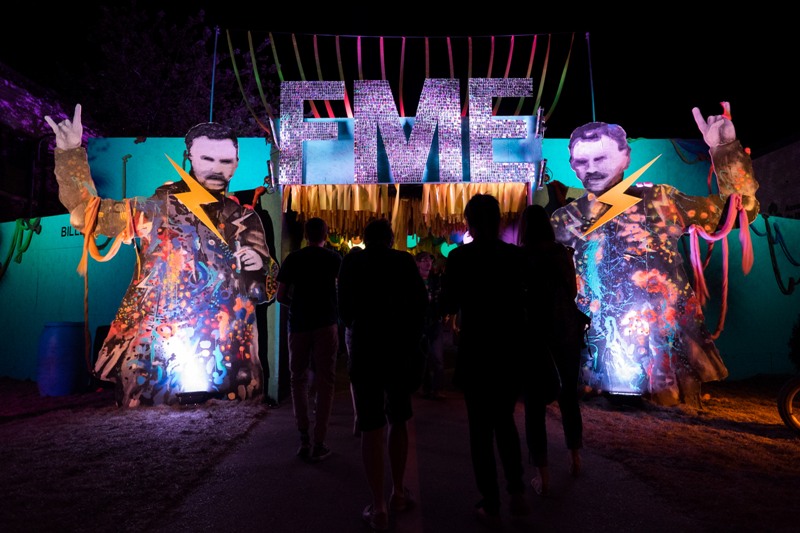 As an American transplant, I found Rouyn-Noranda to be a bit of an enigma. Upon first glance, the town reads as a relatively basic industrial town with a splash of suburbia beside the small downtown area. Sans SOCAN, towns like this in United States would never have a chance of running a festival as well done as FME. Now, this is not to say that grants and funding are the soul body responsible for the festival’s success because the people of Rouyn truly bring the event full-circle. FME feels like one of those special occasions where everyone in the community comes out of the wood work to experience the magic and contribute to its success.

After arriving at the media building on day one, a local volunteer offered to give me a mini tour of the downtown so that I would know where to find each venue. During our short car ride, I asked her about some of the artists on the line-up and she was extremely well versed in many of their discographies and excited about seeing the likes of Samito and Charlotte Cardin. This became a reccurring theme. Every artist was met with fierce enthusiasm, the crowd singing along to their most popular songs. Even the risky, experimental performances were welcomed by large audiences signifying a clear passion for art and music.

Read up on some of my highlights below:

Chalotte Cardin’s earliest artifact is an uncanny rendition of Amy Winehouse’s “You Know I’m No Good” in season one auditions for La Voix. Although Cardin clearly pulls a lot of influence from Winehouse, her songwriting has grown up quite a bit with moodier synthesizers and keyboards carrying her into the smoldering drama of today’s pop stars. Having one of those voices that sounds fantastic over anything, Cardin’s live set-list constantly shifts sound aesthetic, which presents a bit of a give and take. On her riskier songwriting efforts, Cardin’s sultry voice shines over punching hip hop beats and heavy synthesizer melodies. On the other hand, Cardin occasionally panders a bit too heavily to her fans from La Voix, simply showing off her vocal beauty in a relatively underwritten groove. It would be fair to assume that Cardin will develop a more specific sound by the time she releases a full length project, but she is still in the formative stages of her career.

Left with some free time between Cardin and the late night shows, I was drawn to the main stage by the sounds of massive grooves and epic guitar playing. In my research for the festival I was a bit turned off by Galaxie’s overly ecstatic studio recordings, but it is clear that the group knows how to deliver a powerful live performance. Each song spawns from a rigorous keyboard or guitar groove with the group’s laundry list of musicians all joining in for seven or eight-minute jam sessions. One of the interesting aspects of this particular performance was the addition of singer-songwriter Marie-Pierre Arthur. A Québécois star in her own right, Arthur provided the audience with some much-needed sing-along moments to contrast the heavy-handed soloing of Olivier Langevin. Perhaps a bit more subtlety could be helpful for the band’s next album, but for now the three-drum set carrying party bus lives on as one of the most rambunctious spectacles the province has to offer. 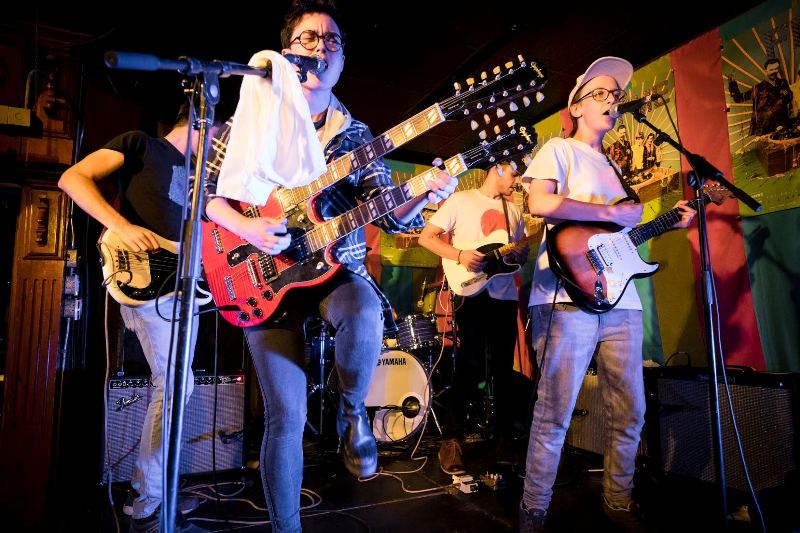 Partner has mastered the art of the Bandcamp page. Currently, the band only has two singles posted, one about Hot Knives and another about Ellen Page. Both songs embrace the sweater-wearing riffage of the ’90s with just the right amount of sarcasm for the Internet’s leading source in random music projects. With this in mind, I was a bit surprised to see lead singer/guitarist Josée Caron dawning a double neck guitar when the band first took the stage. Although their recorded music has no shortage of distortion, lead guitar escapes the soundscape for the most part. The live setting is a bit of a different beast. Each song thrives on a catchy chorus and driving guitar chords, but the bridge is generally left open for Caron to shred the day away. Besides pulverizing the audience with some kick-ass solos, Caron’s stage presence and energy shined throughout the night, injecting life into her bandmates and the excitable FME crowd. 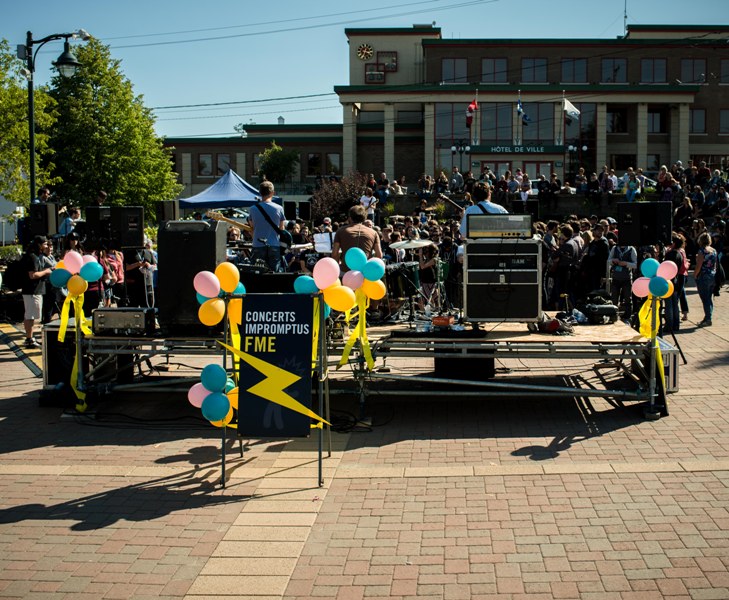 FME was not afraid to experiment and one of the more intriguing events was la Colonie de Vacances, which featured four rock bands facing each other in the town square. Somewhat MC-ed by Greg Saunier, drummer of the famous DIY band Deerhoof, the music followed a loose formula that kept the bands on the same wavelength without caging them in a specific song structure. The idiosyncratic riffs and childlike vocal melodies sung on “La” were viciously reminiscent of Deerhoof’s discography and the four band set-up provided very intriguing interplay that kept the audience hypnotized throughout. 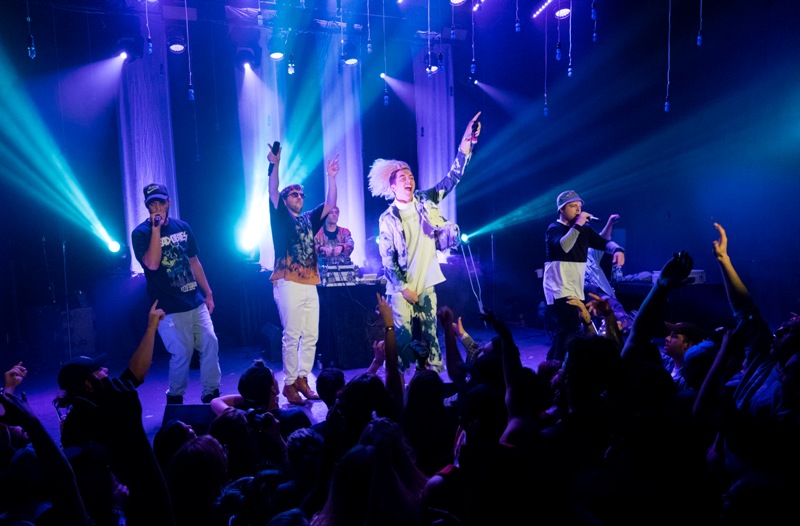 Friday night was hip hop night at Rouyn’s Paramount movie theatre and judging by the crowd’s choice of apparel, the main attraction of the evening was Dead Obies. Fueled by hard-hitting boom-bap beats, emotional hooks and relentless chemistry, the Dead Obies have become established celebrities throughout the province. Although the group’s swagger led to some intense moments down in the pit, the mood in the theatre was overwhelming positivity as each member of the crew supported each other through every verse with the young crowd looking up to their heroes in awe.

Perhaps the group’s choice of language separates their work from that of the more well-known scenes in the United States, however, their musical prowess should not be underestimated.  Beginning with the fun, floating melody of “Waiting,” the group touched upon many different sounds, each song offering new ideas in structure and production, leading into the pummeling bass drums of the finale.

Samito’s early afternoon set time may have been the greatest injustice of the festival. Fresh off of his fantastic self-titled album, Samito delivered an Afrobeat dance set for the ages in the crisp early autumn air for a small, PG crowd.  Between his vigorous synth solos and passionate stage presence, Samito’s personality shined throughout. It was also interesting to hear the cross-roads of cultures within his band’s sound. Aided by dense rhythmic backing tracks, the quasi-rock band set-up provided moments of intense guitar soloing and reverb-drenched vocals to add a North American element to the underlying African grooves. Having been a prominent side man in Montreal for years, it is clear that Samito has picked up a lot of elements in his sound and his solo career is sure to blossom in the years to come. 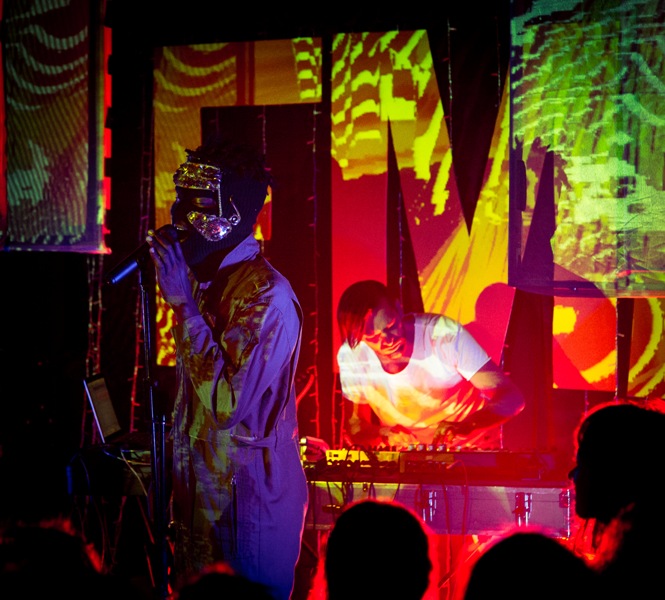 A somewhat new project between Montreal heavyweights Pierre Kwenders and Ngabonziza Kiroko, Abakos already seems to have the full package. Their two singles are astounding in their maturity and their stage set-up indicates the culmination of a lot of hard work. Beginning with ambient keyboard sounds and spacey drum beats from the producer, Kwenders and Kirokos eventually took the stage dramatically, wearing black and gold facemasks. Their stern facial expressions delivered a punching rendition of “Money to Burn,” the doubled vocal melodies adding more weight to each and every lyric. As the set moved forward, the heavy drama of the opening number was dropped a bit, the face masks removed, and more dance-able beats incorporated, but the duo never lost their edge. 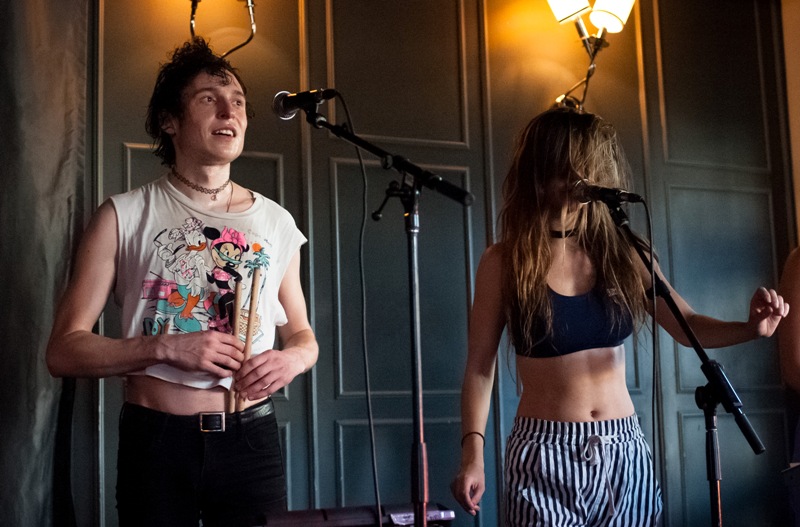 Montreal new wave is alive and well in the minds of Paupière. Biting synths, blissful electronic drum kits and classic ’80s dance moves were all included in their late afternoon set, and even though the casual bar setting didn’t necessarily inspire dancing, the trio’s personality shined on.  Beginning with a slightly lackluster tune, the group continuously gained momentum, by the end obtaining a bit of a punk-rock snarl. Considering the fact that Paupière only released their first EP in January, it is not all that surprising that they didn’t have that big of a turn-out, but their performance style is sure to be met with large crowds in the future. ■