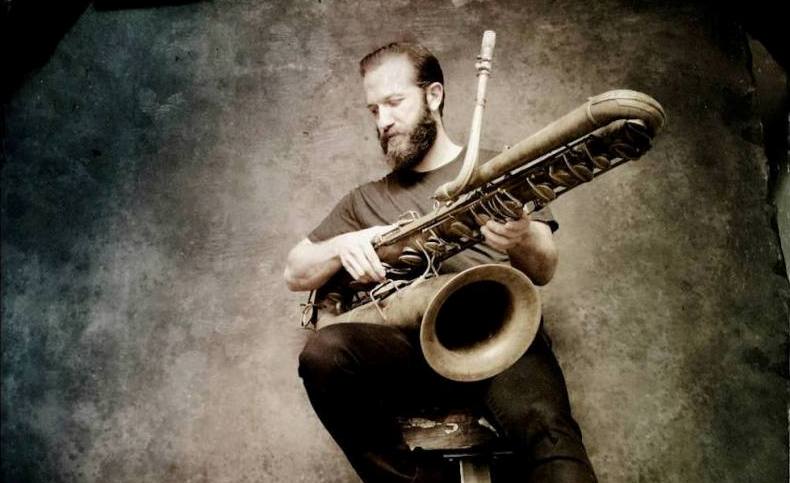 Henryk Gorecki’s Symphony No. 3 is a peculiar case of classical music resurrected by a recording format. Originally composed in 1976, the piece remained in obscurity until 1992, when Nonesuch Records released a performance on CD. The accessibility of the compact disc vaulted this “Symphony of Sorrowful Songs” into the realm of ubiquity. Excerpts of its three works proliferated in ’90s films, and the recording is widely cited as the highest grossing piece of contemporary classical music. A departure from Gorecki’s earlier symphonies, No. 3  explores the emotional devastation of World War II in three movements, each titled “Lento” for their downtempo instrumentation.

Earlier this year, Colin Stetson reinterpreted the symphony, contributing his unwearied breathwork on the saxophone. Sorrow: A Reimagining of Gorecki’s 3rd Symphony executes these compositions with engrossing, all consuming heaviness. Stetson has added two guitars and a whirlwind of drums to accentuate the crescendos. The inclusion of rock instruments seems to make Sorrow somehow more devastating than previous interpretations. But a beautiful tenderness is also conveyed in these pieces, an incredibly sorrowful beauty. In many ways, the reimagined Sorrow approaches the realm of post-classical, and Stetson’s saxophone is the integral instrument, droning along in a ruminative range.

Stetson has now embarked on an international tour in support of this album. Going beyond his work in the indie rock and ambient genres, he will act as conductor and orchestra member for these live shows, allowing attendees to witness the intricate process of realizing these works. The live concerts are likely to be the loudest rendition of Gorecki’s famed opus — in fact, earplugs might even be warranted.

For the second stop of the Sorrow tour, Stetson is scheduled to play his adopted hometown of Montreal. The only Canadian date on this world tour will be hosted by the POP Montreal festival and the Opéra de Montréal this Friday.

I recently managed to track down this busy gentleman for an interview.

Kyle Carney: Reimagining Gorecki’s third symphony seems like a daunting task. What was the most difficult aspect of recording Sorrow?

Colin Stetson: The recording process was certainly tricky as I wanted to make sure we could track the whole symphony live in the studio.  Not an easy feat if you want to preserve any isolation on separate mic feeds when you’re dealing with 12 musicians and one of them Greg Fox on drums…  Luckily, though, Shahzad Ismaily (one of our members) owns and runs a brilliant studio in Brooklyn that has a unique, two floor foot print and is wired for live, realtime video, so we were able to rig a system wherein we could all be separated for the sake of sound but all still see each other so that the music didn’t suffer from our spacial isolation.  That all being said, the first movement of this symphony starts as a long and slowly creeping crescendo of contrapuntal lines which by it’s zenith becomes maximally loaded (and louded), so even with all the video and the best headphone mixes you can get, it’s a challenge for any musicians to pull off the kind of togetherness and rhythmic unison necessary here.  That was probably the most difficult part, but was executed amazingly by this group.

KC: This symphony contains a lot of powerful emotions, was it an emotional process trying to reimagine these works?

CS: This is something that has been tumbling around in my head for so long, incrementally advancing throughout many years, so that there honestly wasn’t a lot of hardship when it came to ultimately bring it all to fruition. The arrangement of the pieces three movements seemed to be fully (or nearly so) complete and imagined by the time we came together and so the rest was just putting it in the extremely capable talents of this phenomenal cast of musicians.  That’s really the key to all of this, that the players are such astounding talents, every one.

KC: Are there any specific elements of Sorrow that you’re planning to focus on for the live performances?

CS: The live performance is the entirety of the symphony as we’ve presented it on record. So, if you’ve heard the recording, you know what will be performed. The group actually recorded the whole record live in the studio, so the playing of this music as one coherent unit has been in the works since the beginning. I can say that it is a truly emotional experience to be a part of the inner workings of creating this music on stage, and that our audiences thus far have had similar moments of transcendence.  It is a huge and overwhelming sound this group creates, and my sister [mezzo-soprano], Megan Stetson, is a performer like no other.

KC: You just played a show in Amsterdam, were there any hiccups or sound issues with the first performance?

CS: This was our fifth performance so far, and we all agreed it was our best. Though there haven’t been hiccups or sound issues with any of the performances to the best of my knowledge…

KC: The Ukrainian Federation seems like a perfect venue for this performance. Was it your idea to play there for the Montreal performance?

CS: The UK Fed was one of several venues we were talking about as ideal for this performance, and ultimately the festival decided on this one. I’ve played there many times in the past, and have seen many shows there and have always felt good on either side of the speakers, so I’m very happy we’ll be presenting this music there.

KC: What can you tell us about the opening act for this show, Weill X 5?

CS: I honestly don’t know them or their music, but am very excited to see it and hear it this weekend.

KC: The final stop on this tour is in Poland, are you nervous to bring this symphony back to its homeland?

CS: When we announced the release of this record and started to look for shows around NA and EU, one of the first offers to come in was from Katowice, Poland, the hometown of the maestro, Henryk Gorecki. I couldn’t be more honored than to be asked to bring this music back to it’s origin and pay homage to the composer that has brought  such great inspiration and catharsis to me and so many others over the years. Very excited. ■

Colin Stetson and the Opéra de Montréal present Sorrow: A Re-imagining of Gorecki’s 3rd Symphony as part of POP Montreal at the Ukrainian Federation (5213 Hutchison) on Friday, Sept. 23, 8 p.m., $30