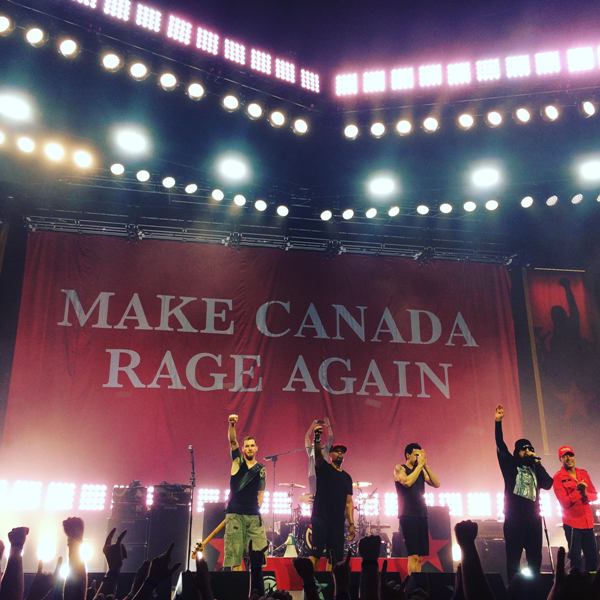 Prophets of Rage at the Bell Centre Aug. 23, 2016. Photo courtesy of Peter Dehais

There’s no way I’m gonna be objective about this. I’ve scoffed along with the next wisecracker about “the profits of age,” sure, but on Tuesday night at the Bell Centre, I saw a De la Rocha-less  Rage Against the Machine fronted by Chuck D and B Real and accompanied by Public Enemy’s DJ Lord, so “Fuck you, I won’t do what you tell me,” if what you tell me is to be a cynic.

Because guess what? Prophets of Rage, the supergroup comprised of all the above mentioned talents, are awesome. No one should deny themselves their curiosity in this case, because if you’ve loved these dudes — whether since your heyday as a ’90s cool kid or millennial music fanatic — you’ll simply love this show, especially the RATM end of things. Rage fans know how deeply PE inspired the politically bent rap/rock groundbreakers, and so why anyone would be mad at this is beyond me. Remember Audioslave? Yeah. This ain’t Audioslave.

So right, if you still don’t know, POR features  members of these three bands covering and remixing each other, with Chuck and B handling the vocal duties for the Rage sections beyond capably, Chuck bringing the power and Real bringing the urgency.

The show began with a hype-up DJ set from Lord, a master of shifting from rap to rock in a single backspin, which he is able to execute backwards, as demonstrated. Lord has been PE’s wheelman for a minute and holds his own legacy aside from OG Enemy cutmaster Terminator X. Even though the crowd gathered weren’t necessarily a hip hopping bunch, Lord’s 15 minutes got them well lubed, and when the lights went down, we were ready for POR to bring the noise.

Prophets of Rage hit the stage with, aptly enough, PE’s “Prophets of Rage,” bouncing, thrashing and rumbling the low end with convincing ferocity. The mic levels never really caught up to the sonic boom of the instrumental dissonance Brad, Tim and Tom of RATM are known for, but with two old pro, distinctively voiced  MCs like these on duty, that can only go so far wrong.

The earliest part of the set was cool, but didn’t hit greatness immediately. Highlights include B Real’s blood-chilling scream during Rage cover “Bombtrack.” “Take the Power Back” and Cypress bong hit “(Rock) Superstar” raised the stakes some as the band gained momentum — iconic songs that drove home who we were fucking with.

At some point if you’ve been around a lot of live music, you’ve heard innumerable shitty covers of Rage, and maybe a decent one here and there, so it was a special feeling that hit me in waves throughout the show to realize the drums, bass and effect-heavy guitar were the real deal. Tom Morello especially floored me, his licks being some of the most innovative of my generation. I daresay those scratches and screeches hit so deep down my ear canal at times that I was having bonegasms.

A note or two about the ambiance. Lotsa dudes for sure, lotsa metal heads and lots of smiles. The NDG Food Depot were invited at the behest of Morello and POR to run an info/fundraising kiosk in the hall of the Bell Centre and were shouted out several times from the stage by the guitarist and Chuck D, so that was awesome. And as a special treat, in my section, two b-boys — Chilly and Soul Step of L.E.G.Z. crew — were permitted to break near the stair entrance, which created a pretty awesome vibe in my immediate vicinity, complementing the sheer dopeness of what was happening up on stage.

A stripped down medley of PE/Cypress songs (bookended by Rage jams “Testify” and “Sleep Now in the Fire”) was performed by their respective rappers down on the floor, in the crowd, as Lord spun the original backbeats. It was a little hurried, but still awesome to watch these two stalwarts take it back and forth.

A mid-show lull offered an unnecessary nod to Audioslave and a totally shitty take on Rage Springsteen cover “The Ghost of Tom Joad,” but it made for a good bathroom break, and when that unfortunate moment was finished, we were ready for the Grade A arsenal of Proph-bombs.

In short order, “Bullet in the Head” (I am still freaking that I heard this live in my lifetime, sung by these guys), “Know Your Enemy” and “Bulls on Parade” made the arena shake, with the crowd losing our collective shit in unison. At some point the background banner switched from the POR logo to a red background with the words “Make Canada Rage Again” emblazoned in white. Quebec got a fond throwback to Beasties shows of yore when the band launched into “No Sleep ‘Til Brooklyn” hybridized with PE classic “Fight the Power.” Truthfully, it was a little corny, but fuck it, everyone partied.

Then came the big kahuna, the incontournable, the absolute crowning jewel of RATM’s career and a loud, angry evening of noise and rebellion. I don’t know that I’ve ever seen an entire crowd sing all the words to a song together — I mean every last person — until “Killing in the Name” and its famous chorus, quoted at the top, dropped like an anvil to take the whole thing home.

You don’t have to do what anyone tells you, but if Prophets of Rage return to Montreal, just fucking go, you old cynic. ■