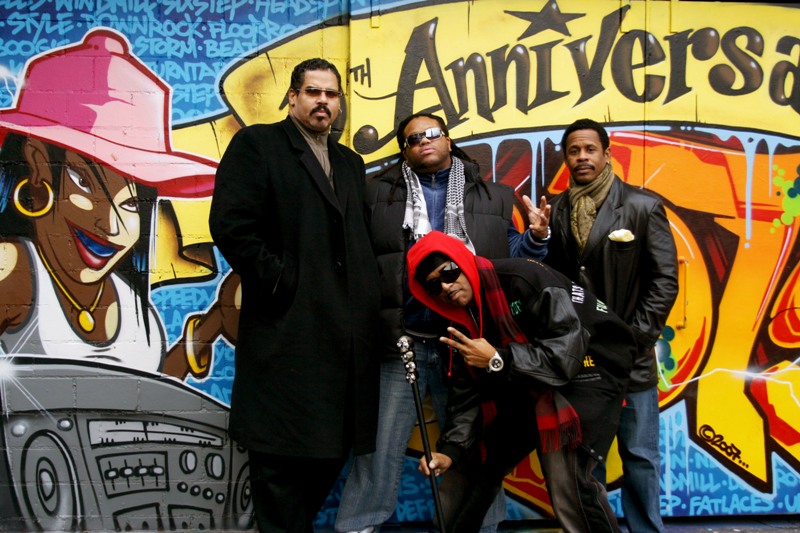 In a decidedly un-hep turn of events, my duties as a square dad overtook my penchant for striped shirts and French berets for a day there, so sadly, I missed Fwonte‘s Thursday-night set, which I had intended to cover. My colleague Cindy tells me it was great.

Then I got home last night to find out I had totally slipped on plugging my man Poirier’s Migration Soundsystem and their live-band debut at Metropolis. I couldn’t have gone anyways — still with the young ‘un — but the P had this to say on Facebook afterward: “Wow. Juste wow.”

So I’m sure that was a helluva rumble. Make sure to check out his latest, Migration, if you still haven’t. I find the sweet reggae music therein helps relieve things like “the stress of smacking my head into the wall for forgetting this show was on.”

All that said, my daughter and I had an enjoyable evening strolling the site, rain be damned, hearing cool little bits of sets and laughing uncontrollably at the name Igor Butman, while waiting to see if the weather would remain endurable for Busty and the Bass at 9 p.m. on the main stage.

Clearer skies provided a lovely sunset, we found a great vantage point in the general access guest tent on the left-hand side of the main stage (well worth getting there early for) and pretty soon the Montreal nine-piece were entertaining a crowd of thousands that sprung up seemingly out of nowhere.

If you don’t know, Busty and the Bass are a group of McGill music students that formed a couple of years back, signing last year to Quebec indie stalwart Indica Records. A new EP, Lift, dropped yesterday to coincide with the show, and they just got back from a first European tour, with sold-out London and Paris shows under their belts.

Speaking of belts, man, do these cats belt it out. They’re one of these kinda genre-bending acts that meld jazz, soul, funk and hip hop, a sound that can fall really flat when the players aren’t genuine. You’re not gonna find too many potential future Parliament/Funkadelics out there trying to straighten out the curves to avoid the dangers of losing the one, if that makes any sense. Busty and the Bass are really good at writing songs that come from obvious roots and making them real, and believable, and soulfully true.

The set included their newest material as well as favorites from prior projects, a total standout being a heavily-MJ-influenced new number, whose title I unfortunately did not catch and do not wanna fuck up despite having the set list in front of me. Rather than guess, I’m gonna get that new album, fast, and I suggest you do the same.

They were playing again at 11 p.m., and if the early crowd energy was any indicator, round two musta turned all the way up.

Which is what I’m about to do, really. Tonight I’ll be at the Sugarhill Gang concert at Club Soda from 10 p.m. Old-schoolers and curio seekers alike should know there are still tickets available, but if you don’t see it, make sure to see my review Monday. And bang-bang the boogie and all that.

Sunday night I’ll be taking a break but you can see my picks for today and tomorrow below. Then shit gets real for me on the review front all next week, starting with Kool & the Gang at Place des Arts on Tuesday.

Feedback, questions, suggestions and angry curses can be directed to @ShineCultMTL, where you can also follow me for Fest news and updates.

4 p.m.: Gruv’n’Brass — there’s actually an umlaut on that ‘u’ but I have no time to figure out how to make one happen — look like a good bet on some solid horn hustle. (Place Heineken, free outdoor; 7 p.m. in front of Complexe Desjardins, free outdoor)

7 p.m.: Tourists looking to take in some rising local sounds might want to look into the bluesy-cool vibe of John Jacob Magistery (Savoy du Metropolis, indoor, $22 – $25)

8 p.m.: If there is a free show not to miss today, this is the one. Samito is a Montreal-based talent that just hits all the right notes, melding African roots vibes to psychedelic soul and beyond, this is just the illest thing you are gonna hear out there today, bar none, with all due respect to the rest of today’s performers. Prove me wrong. (Turkish Airlines/CBC Stage)

11:59 p.m.: I meant outdoor free show by the way. You’d also be foolish not to catch Montreal’s Kalmunity at night two of their Savoy. I hope to not find myself eating those words, seeing as how I already missed round one last night. More on Kalmunity in a moment  (Savoy du Metropolis, free, indoor)

7 p.m.: A Montreal classic – the songs and strums of Shane Murphy on a summer’s eve (Bell Stage, free, outdoor)

9:45 p.m.: Malika is an affiliate of the aforementioned Kalmunity, as is Fwonte (who, full circle, also played with Migration Soundsystem last night).

If you get out tonight to see their hip hop/soul leaning improv session and dig, you can catch Kalmunity Jazz Project, which I think explains itself. This is a nice chance to see a local treasure of a collective do their thing – a recurring event – in a classic jazz atmosphere, a little more uptown. (Resonance Café, 5175 Parc, $8)

EXTRA HI-HAT: When I used to write a rap column regularly this is the type of thing people would yell at me after for not “telling” them, ahem. Danny Brown is at the Metropolis on Tuesday. Repeat: Danny Brown, Metropolis, Tuesday. Tickets are $32 and up, so save your weekend thrill cash for July 5 and dip. Posterz boy Husser opens up, no less. More on all this early next week. ■