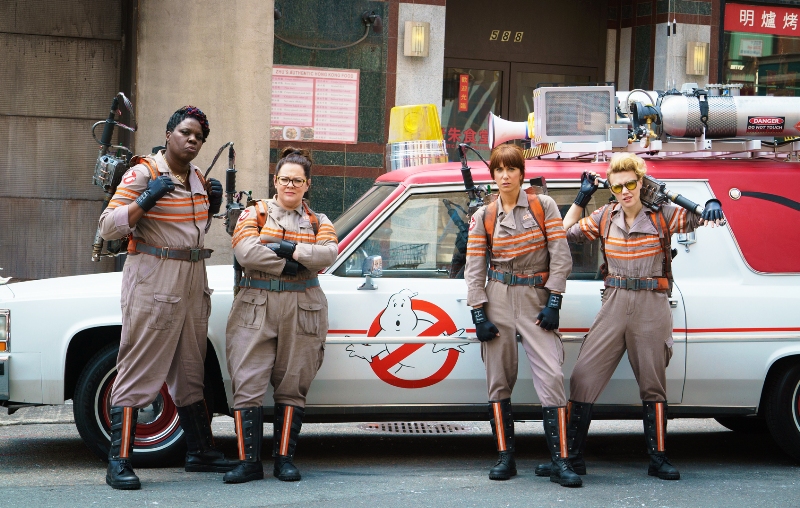 My daughter will never know what it was to have a Beta machine and, like, two blank tapes that three or four people consistently erased over with their own shows and movies.

Like any hot-blooded seven-year-old circa ‘85-’86, Ghostbusters immediately became part of my imagination. These funny dudes gave us a way to put down our childish fears. I don’t know how many times I’ve  seen it on Saturday night rentals or at birthday parties in that autumn of my youth, but I can remember one of those coveted blank tapes finally being ceded to me, for keeps, with an NBC movie-of-the-week edit of the film to call my own.

I also remember being excited for the 1989 sequel, and knowing I’d get to see my heroes on the big screen then for the first time. I loved the soundtrack, which featured Run DMC, Bobby Brown and Doug E. Fresh. And by the next year, we had a VHS machine. Pre-pubescent me watched GB2 ad nauseam.

I eventually distinguished the two for what they are: a comedy masterpiece that sharpened my little brain, and a campily unnecessary follow-up that will always have a place in my heart, if only for the sight of Bill Murray strumming a cello with a rockabilly sneer and playing with a baby.

I believe I justified buying my first DVD copies of the films around the time my own daughter was born (that green, two-disc “Slime” edition with the cool booklet). I figured one day we might laugh at it together. But the booklet was for Daddy.

And so it was. When Melodie was about four, I figured it was worth a shot trying the first 10 minutes on a Friday movie night, home together. She got past the library spook, laughed at Venkman’s ESP experiments, and became instantly hooked.

It sounds crazy but she didn’t even flinch. It’s like her mind didn’t distinguish between Gozer and Dora. Melo just dug the movies for the cartoons they essentially are, asking to watch them over and over. And over. And over. I think that’s how she figured out how to use the DVD player, and how I learned about karmic retribution.

She, too, became a disciple of the four hapless supernatural hunting do-gooders, their friends and their foils, their proton packs, their car, their headquarters, their firepole and their zing-fuelled heroics.

So when I heard all this talk about an all-lady Ghostbusters, I gotta say I was down from day one.

Goofy and super fun, if a little all-over-the-place, the feminized, Paul Feig-ified GB reboot has enough heart, pop humour, talent, chemistry and throwback surprises to save it from its rushed back stories and a fairly lacklustre villain. It has wit, soul and yes, certain arguable stereotypes. But its four heroes are, to a woman, outcasts in their own right, none any more distinguished than the other with where they are really at in life, career-or-otherwise.

All four of our new paranormal experts are on equal ground insofar as they have no clue what the hell they’re doing, whatsoever. Unlike the heroes of the original film, who fell into the ghost game with opportunity and know-how, this ‘Busters story develops by trial and error, effort and ingenuity. And their hunky receptionist — let’s call him more Louis Tully than Janine Melnitz.

By now you’ve likely read the plot synopsis, and it was pretty close to what the fan sites teased for the past year, but here goes: Columbia prof Dr. Erin Gilbert (Kristen Wiig) is on tenure track until her past as a believer in the paranormal comes back to haunt her (har-har) when a book about ghosts she wrote with former friend and associate Dr. Abby Yates (Melissa McCarthy) surfaces, discrediting her in the eyes of her department.

Gilbert tracks down Yates to give her what-for but finds her working in a third-rate college with a weirdo research partner, Holtzmann (played with less-than-subtle spectrum-hinting quirk by Kate McKinnon). Before we know it, bridges are being mended as the trio respond to a paranormal disturbance at a mansion with a history of spooks. 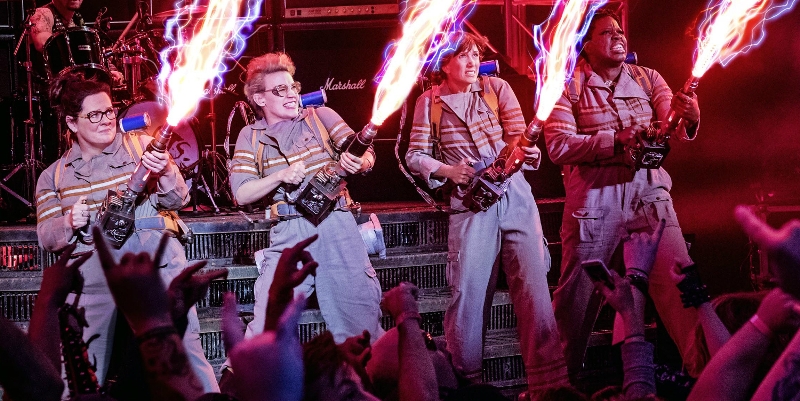 If that sounds a little convoluted, well, hell — I hate to break it to you, but the whole film plays out the same. The trio, soon joined by transit worker and NYC-phile Patty Tolan (Leslie Jones), spend most of the film chasing down some weirdo with a machine that heightens kinetic energy, ergo drawing more creeps from the afterlife to our world, and the whole affair is as lukewarm as it sounds.

Thing is, it doesn’t really matter: Ghostbusters is perfect popcorn fare. If zingy dialogue doesn’t tickle your funny bone, don’t bother, but otherwise, for the average person with a sense of humour, there are tons of laughs and tasteful nods to the original throughout. If you can let go and enjoy performance over perfect storytelling, the jokes and eye-poppingly freaky ghosts will leave you satisfied the way bloated summer flicks rarely do anymore. The 3D is somewhat useless but occasionally fun. You can save a few bucks without losing much in terms of the gross-outs, I suppose.

It’s not the original, and nothing ever will be, but I do believe this reboot serves as solid first attempt of building a new franchise. Perhaps some of the plot’s weaknesses will be explained in further outings. And for the hardcore fans, no matter how you feel, stick around for that post-credit scene.

We thought it would be fun to get a child’s perspective on the film, so I interviewed my 10-year-old daughter Mélodie to get her two cents on her generation’s new version of the fabled spectre sleuths as compared to the OGs.

I’ve rarely seen her leave a movie so excited, so that bodes well for people who want to bring their kids, and aside from a few off-colour jokes, they shouldn’t be too afraid of no ghosts.

Dad: What did you like about the original movies when you were little?

Melo: I found Slimer funny. And it was my first scary movie that I found scary, but the comedy made it better.

Dad: Why was it scary to you?

Melo: What made me scared was, I guess I kinda got freaked out when the rock turns into an actual goblin, that was scary. The slime was gross. (laughs)

But what made it okay was I liked that they weren’t all that scared. And I also like that the ghosts were out for Venkman completely.

Dad: What did you find funny?

Melo: For sure I loved Janine and Louis. They’re my favorite. Also I found the ghosts cheesy when I was young – I wasn’t scared of them, I found them funny.

Also when Venkman is electrocuting the boy, that was like the first scene that was funny and I still laugh at that.

Dad: What were your favourite parts in the original?

Melo: When all the papers and books are flying off the shelf, I find it awesome. And the part where they go to jail and all the prisoners are listening in.

Dad: So what did you like about this new one being all girls?

Melo: Female pride! Four years ago I dressed up as a girl Ghostbuster for Halloween and they weren’t planning the new movie yet. I wanted a new movie to come out. So it was fun because I was a Ghostbuster girl, too. And I was a big fan of the original, but it was all guys except for the secretary, who was very funny, too.

I liked that it gave an example that girls can do these things. I hate the expression “firemen” because it’s “firefighters” and women can do it, too. I like that they didn’t call them “Ghostbust-ettes!”

Dad: Who was your favourite of the new team?

Melo: It has to be Holtzmann because she’s just weird and I can relate to that. Then Abby, because I like the way she shows up with her jokes. Then it’s Patty ‘cause she brings this nice vibe to the group. Her way of seeing things is cool.

I liked Patty and Erin equally though, and I like Erin because I found her kind of like, I didn’t like the way she didn’t wanna be a part of it at first, but she brought a Bill Murray kind of feeling to (her role).

But I also love (receptionist) Kevin (Chris Hemsworth). He’s so funny, and so dumb. He doesn’t know how the phone works!

Dad: Did it live up to what you were hoping for?

Melo: Yep. I was hoping for a more villainy villain, but I got scared by other things.

But it brought back memories from when I was small, and it made it mine a little bit more. They made it relate to me, more, I found. I liked the idea of using more modern technology and all the cool new gadgets they introduced.

Melo: I mean, it was okay. The plot could have been better. But I liked it because it felt traditional. ■