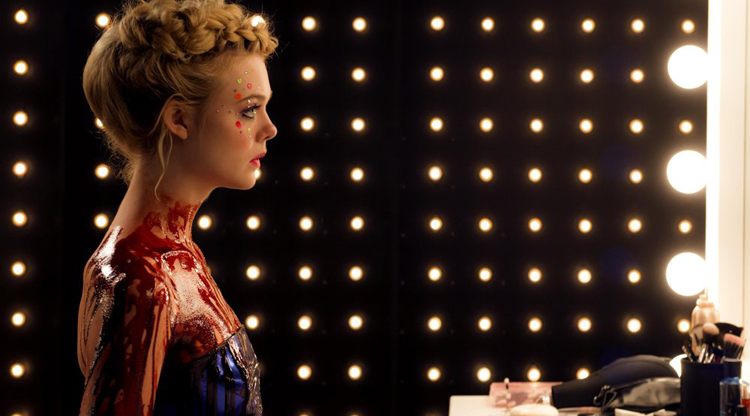 Elle Fanning in The Neon Demon

Few filmmakers working today are as divisive as Nicolas Winding Refn. Though pretty much everyone agrees that Drive (arguably his most conventional film) is great, the majority of film buffs are split on his other efforts — particularly the elliptical, brutal follow-up to Drive, Only God Forgives. Refn often feels driven purely by aesthetics, making narrative decisions based on his love of a particular hue of light or specific framing, and audience reactions are often similarly gut-driven. Bad news for some, then, that Refn’s latest also revels in aesthetics, colours and light above all else. It’s a pretty single-minded takedown of the fashion industry that also completely indulges in the clichés of that world, a deliberate, neon-soaked nightmare that’s not so much satire as it is just a pamphlet of guilty disapproval.

Jesse (Elle Fanning) is the archetypical small-town-girl-with-Tinseltown-dreams, arriving in Los Angeles with no connections, no life experience and little else but her looks with the hopes of making it as a model. She lands a gig with an amateur photographer (Karl Glusman); the resulting pictures attract the attention of an agent (Christina Hendricks) who soon pushes her towards the big leagues. Jesse’s youth and beauty attract only ire from fellow models (Abbey Lee and Bella Heathcote), but a perverted kind of friendship grows with a make-up artist (Jena Malone) who seems to be the only person who isn’t rendered obsessively jealous by her looks. 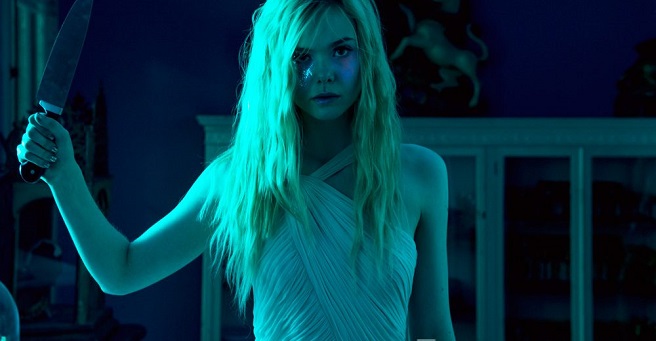 It’s somewhat brilliantly perverse of Refn to basically condemn the vampiric, youth-obsessed fashion industry by 100 per cent embracing its most prurient clichés. In a photoshoot scene where Jesse is asked to doff her clothes, for example, Refn shies away from male-gazing all over her naked body but nevertheless embraces the weird sensuality of the photographer smearing her with gold body paint in exactly the same way that a flashy commercial selling that body paint would. It would seem hypocritical coming from pretty much anyone but Refn, who has very clearly embraced the aesthetics of brutality from very early on in his career, but this hypocrisy basically becomes Refn’s M.O. for the rest of the film.

That having been said, there’s not much actual substance below the surface. Refn essentially eschews metaphor altogether, which means the film isn’t really open to interpretation. Despite the relatively dream-like nature of the film, Refn does give us one obvious dream sequence (featuring Keanu Reeves, no less, who has a small role as the sleazy manager of Jesse’s motel) to ensure that we don’t see the movie through tired it-was-all-a-dream lens. It’s a sensory experience through and through, blunt (if not slightly clumsy) in the way it underlines the insanity of feminine beauty standards. While not a talky film by any stretch, it’s certainly Refn’s most wordy film since Bronson and the effect is somewhat dampened by its deliberately sensorial construction.

The Neon Demon is being touted as a horror film, and I suppose it is in the same way that the lush European exploito-arthouse movies Refn is inspired by are. (Think Daughters of Darkness or some of the classier Jess Franco movies with a heavy dose of perfume ad.) It’s a film of textures and colours — some of which happen to be blood — but not one of particular substance. Like all of Refn’s film, it lingers in the mind whether you enjoyed it or not — it sits heavy as an experience, even if its overall point that the fashion industry puts unattainable standards on young women isn’t likely to be an eye-opening one for most. Refn has said in interviews that he deliberately made certain not to critique the industry, but if that’s what that looks like, I hope he never makes a deliberate satire. For better or worse, Refn does Refn, and I wouldn’t really want it any other way. ■

The Neon Demon opens in theatres on Friday, June 24. Watch the trailer here: