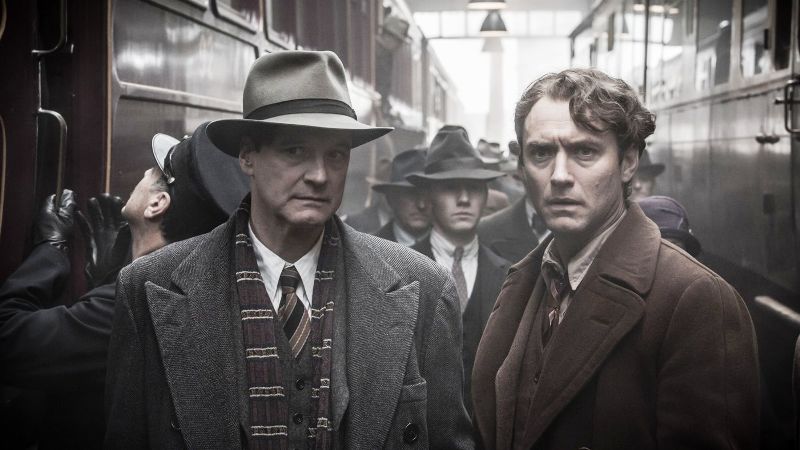 Conveying writing talent on-screen isn’t an obvious task. Real-life writers are too often eclipsed by their non-writerly pursuits, and  it’s quasi-impossible to do justice to brilliant fiction with on-screen narration. As an action, writing is romantic but not inherently cinematic; the film-editing that goes into conveying brilliant writing can be even more thanklessly uncinematic than excessive narration.

Michael Grandage’s Genius is theoretically about the relationship between seasoned editor Maxwell Perkins (Colin Firth) and the tempestuous young writer Thomas Wolfe (Jude Law). It’s not so much about a friendship as it is about a volatile working relationship and especially the particularities that come with going into one’s work and rearranging it. Sure, Wolfe is loud and drunk and prone to histrionics, but it’s mostly a movie that relies on scratching out paragraphs in red pencil for narrative propulsion.

When Wolfe’s manuscript lands on Perkins’ desk at Charles Scribner’s Sons, it has been rejected by every other publishing house in town. The unwieldy tome is at first a burden on Perkins but nevertheless captivates him, and he accepts to publish Wolfe’s debut novel (which would eventually be titled Look Homeward, Angel) on the condition that Wolfe trims it down to size.

A boisterous bon vivant, Wolfe is nevertheless very attached to his work and winds up fighting both with and against Perkins as they whittle it down into something publishable. The novel is a resounding success and, as Wolfe becomes more recognized as the voice of a generation, his friendship with Perkins grows as his relationship with his much-older lover Aline (Nicole Kidman) sours.

Genius functions on the uneven plane that separates Wolfe and Perkins: the author is loud and boisterous, prone to fits of anger, joy or both at the same time, while Perkins is stuffy and buttoned-down, never taking off his hat (the top of Firth’s head is not seen once in the film’s 104 minutes) and interacting stiffly with his wife (Laura Linney) and daughters. Wolfe’s the most interesting character of the two, but it’s Perkins’ stuffy, no-nonsense bourgie rigidity that drives the film. Theatre veteran Grandage might attempt to shake things up with an uptempo jazz soundtrack and a lively performance from Law, but it’s really the character of Perkins that sets the tone.

Genius feels dusty and immobile for much of its runtime. It’s never so much boring as it is dull and rote, moving through biopic clichés (which include cameos from Guy Pearce as F. Scott Fitzgerald and Dominic West as Hemingway; both writers were also close affiliates of Perkins) awash in dust and earth tones. There’s certainly something courageous about telling the story of someone like Wolfe through the eyes of a character who’s smart but an emotional cipher, but it doesn’t pay off here.

Ironically, it’s the aforementioned uncinematic editing process that winds up being the most interesting part of Genius. The men’s inner lives and their relationships are mostly glossed over (wasting both Kidman and Linney in the process) everywhere but in their marathon editing sessions — these are pretty much the only time that the movie comes alive and offers more than surface-level insight on anything. These are also the most explicitly theatrical sequences in the film, which are both bolstered and weakened by Grandage’s long career working in theatre. Law is great as Wolfe, an outsized personality prone to fits of verbal and literary diarrhea. If he doesn’t exactly seem like the most obvious choice for the role, it’s a casting decision that pays off more than Firth’s sleepwalking take on the nth crusty upper-middle-class dude in his career.

Genius does have the benefit of drawing from Wolfe’s words in order to paint a picture. The author’s quasi-logorrheic outpouring of language makes a case for his brilliance that Perkins’ beige, behatted presence does not. As good as the film looks and as compelling as Law is in his role, however, Grandage doesn’t quite manage to make the material come to life. Genius is only fitfully compelling and largely bloodless — a description not necessarily befitting the larger-than-life Wolfe. ■