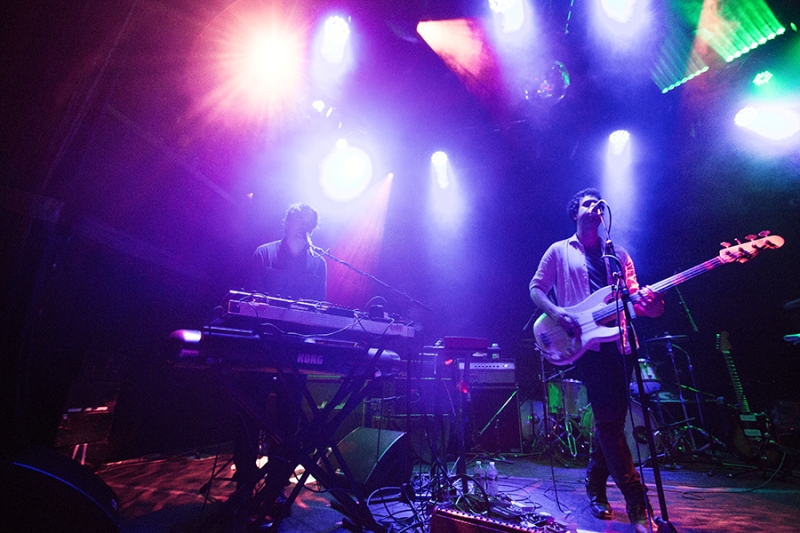 Wolf Parade at the Bowery Ballroom. Photo by Charles Steinberg

It was an unforgettable Montreal music moment 600 kilometres away. Last week in New York City, Wolf Parade ended a multi-year hiatus – one that appeared permanent for the longest time – with five shows at the 575-capacity Bowery Ballroom.

It wasn’t necessarily the biggest comeback story in the city that weekend – Puff Daddy and the Family were getting reacquainted at Barclays Center in nearby Brooklyn – but for those lucky enough to snag tickets to Wolf Parade’s first shows since 2011 (minus a few test previews in their native B.C.), it was a very specific nostalgia trip that left one giddy about the future.

If the Friday show I attended is any indication, this isn’t a cynical reformation fuelled by ulterior motives: This is the loose-playing, passionate band we remembered from the mid-aughts onward, picking up where they left off after 2011’s triumphantly self-destructive Expo 86.

Wolf Parade 2.0, as co-frontman Spencer Krug called them at the end of the night, started off the new era in a chipper and decidedly sober mood, which might have caught fans off guard given the occasional onstage tensions and/or sloppiness from their heyday. Krug and the group’s other main songwriter and vocalist, Dan Boeckner, were seemingly simpatico in a whole new way, showing more interest in contributing to each other’s songs with backing vocals and instrumental touches. Boeckner’s contributions were especially noticeable, mostly because his piercing guitar – similar to how it sounded on Expo 86 – was a touch louder than the other instruments.

Despite sharing sonic qualities with latter-day Wolf Parade, Friday’s set was heavy on tracks from their debut, Apologies to the Queen Mary. The 11-year-old record was a pivotal one for our then-fledgling indie music scene and remains a satisfying and complete first album. They actually opened the set with “Language City” from 2008’s At Mount Zoomer, but it was then followed by “You Are a Runner and I Am My Father’s Son,” “Fancy Claps” and “It’s A Curse.” It didn’t take long for the sold-out crowd to feel collectively emboldened to shout along, or for the venue’s floor to sink ever-so-slightly.

They pulled out “Modern World,” a song Boeckner said they hadn’t performed in a long time, along with Apologies cuts “Grounds for Divorce” and pre-encore 1-2 punch “Shine a Light” and “I’ll Believe in Anything.” For an unexpected finale, the band – rounded out by drummer Arlen Thompson and bassist Dante DeCaro – closed with “Dinner Bells.” Fans of Apologies went home happy, and based on the number of people screaming and waving their fists to “I’ll Believe in Anything,” many fit into that camp.

Songs from their latest four-song EP, released last week, felt oddly familiar despite being new. It bodes well. The band also informed the audience that as the show was going on, they were also appearing on The Late Show With Stephen Colbert (watch the performance below).

The band is taking their sweet time to perform again in their former hometown: Wolf Parade are playing Osheaga and an afterparty at Corona Theatre in July. It will be worth the wait, though, as the band has re-emerged without rust. It’s not entirely surprising since Krug and Boeckner have been at the top of their games with Moonface and Operators, respectively, but this reunion is showing they’re a truly thrilling and honest rock band when they stick together. ■