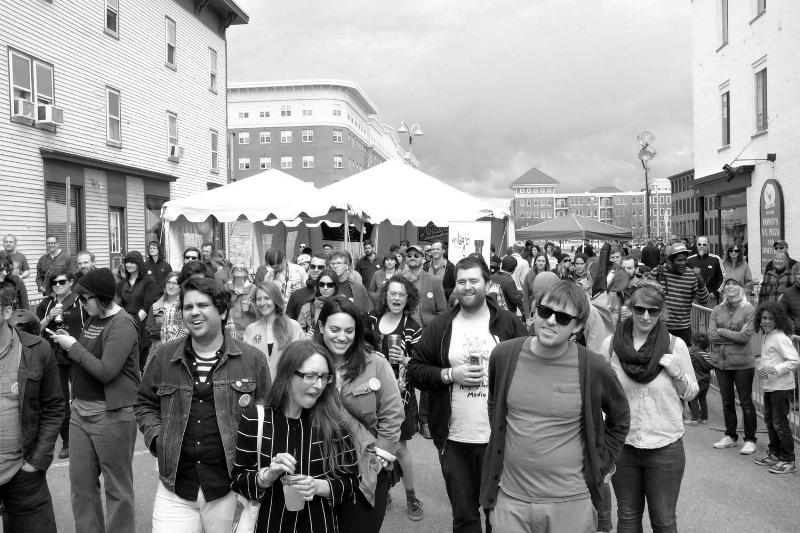 The crowd at an outdoor Waking Windows stage, 2014 (see more at VPR.net)

This weekend, Winooski, VT will be doubling in size.

Pretty much every business in the small town of just over 7,000 people — a tiny slice of heaven two hours south of Montreal — will be opening its doors this weekend for the sixth edition of the Waking Windows festival. In addition to being a music festival with around 150 bands, including a bunch from Montreal, Waking Windows will offer food, reading, comedy, outdoor stuff and family-friendly activities.

Some of the big names set to play on May 6–8: Yacht, Speedy Ortiz, Waxahatchee, Mac McCaughan + the Non-Believers, Califone, Protomartyr and Gorilla Toss.

Locals who will be making the drive down: Besnard Lakes, Plants and Animals, How Sad, Nancy Pants, Technical Kidman, UUBBUURRUU, Corridor. The latter four will play as part of a Blue Skies Turn Black showcase at Monkey House, Winooski’s one true bar-venue, on Saturday.

“A Montreal audience is something we’ve been trying to cultivate the last few years,” says festival co-founder Paddy Reagan. “There are a lot of Montreal bands we like, and it’s nice to be able to include them.”

Waking Windows is not a festival ruled with an iron fist – organizers allowed BSTB and other showcase curators to pick and choose their own bands.

“There are two Burlington bands, Apartment 3 and Sleeping In, who are putting on a showcase with bands they met while on tour. We gave them a space and a budget and they put together a really rad show,” says Reagan. “We don’t always have to know each band. Sometimes it’s just about knowing people that we like who have good taste and letting them do their thing.”

The festival has doubled in size every year since its inception, and they’re hoping to hit between 7,000 and 10,000 in its sixth year. Because Winooski is a small town — it’s only 1.5 square miles if you’re down with imperial measurements — expanding Waking Windows has required working with their neighbours. They expanded from Monkey House to cafes and restaurants within the town’s central roundabout, and they’ve since added an outdoor stage on a closed street. Amazingly, there are even a couple of vacant spaces that will be converted into temporary venues. (St-Laurent Blvd. property managers should take note.)

“It’s cool to watch Winooski grow and we have to change our footprint every year with businesses moving in or moving out,” says Reagan. “It’s been a learning experience in communicating with the community.”

For Montrealers looking to make the drive down, Winooski has a conveniently located parking garage. Once there, expect a quick lesson on Burlington’s music scene as you venue-hop around town.

“There are a lot of local bands on the bill,” says Reagan. “We don’t necessarily cover all the bases, but it’s a good introduction. Something we’re interested in doing more is knowing about the scene in Montreal and working with people from outside Burlington. It’s something we’re welcoming.” ■