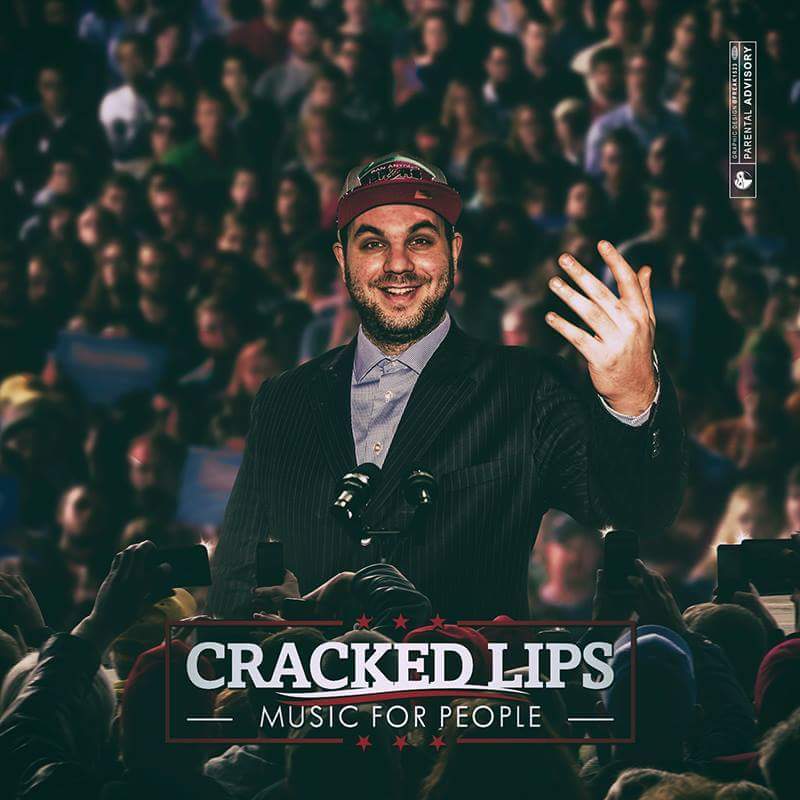 It seems like as long as I’ve been following local hip hop in Montreal, Cracked Lips has been there, spittin’ bars on the corner, freestyling out the show or doing sets here and there around town, at one point with greater frequency as 1/4 of now-defunct rap super crew Murderface.

With Cult MTL’s annual Best of MTL readers poll out tomorrow, it seems fitting to present my first formal sit-down with CL — solo, now — on the eve of his debut studio release Music for People, including production from BK, Johnny Illdigger, El Cotola and Moonboots.

Dropping Friday with a launch show at O Patro Vys, the rapper has ranked in the Top 10 hip hop category some years on, some years off, but has been as consistent on the street and stage as he has been with spitting hard bars since the day I met him back in 2004. He has always been one of the city’s best, acknowledged or not.

Coming on the tails of autumn’s 16 Joints mixtape, it would appear that Cracked Lips, after all this time, has his shit together and is ready to show the rest of the world what’s what on the mic.

I caught up with him about where he’s been, where’s he’s at, where he’s going and what he thinks about it all by phone, to present you these reflections on rap and reality from a Montreal original. Ladies and gents, meet Cracked Lips again for the first time.

“I did have chapped lips. And another reason I made that name was it was more of a joke name, because when I started rapping I was really bad. I never thought I’d be good ’cause I was like, novelty rapping. I wasn’t even thinking I could be good. My friends and I used to freestyle terribly for like, the first year or so. I only realized later that I maybe could be good, and I was already Cracked Lips. And I guess I was inspire by names like Scarface. Body part names. (chuckles)

“I kinda rapped because I was able to learn rap songs without even consciously knowing it. Like I’d hear a song and just rap the whole verse; it was easy for me to remember.”

ON BEING A OG, GULLY MUHFUCKA’

“Not even that much. Unless it’s my own way of being gully. Because I’m definitely not the universal standard, worldly accepted definition of gully. I see what you mean. I never even thought I’d ever be decent, you know? Much less better than decent.

“I’m definitely OG but it’s for bars. It’s for rapping. It’s not like the classical sense of OG. It’s more like, people remember me from killing shit when they were teenagers, witnessing me rap in the street or whatever, super well, long ago, and then (seeing me) still doing it now.

“Literally, my character is the character that I have. My personality. The way I am. And it’s not that I’m not exaggerating for rapping, because everybody does that, obviously. But you’d have to be a very non-observant onlooker to not realize that there is sarcasm involved, and that not everything is absolutely to the letter. But it’s all derived from me — there is a connection and a reason why.”

WHAT KEEPS HIM IN MONTREAL

“Nothing. It’s just not deciding to do better. The scene is kinda like a wasteland — not for talent, but for opportunities. For some reason, and I guess for reasons other people often don’t, you know, laziness, or not being sure where to go, or how to restart your life or what to do, shit like that. I guess I just stick to the city because I’m familiar with it. I don’t have a good reason, you know?”

“I don’t even really know because I didn’t do shit when I was a young’un, I was just good at rapping. But I didn’t write for a really long time. And then I didn’t record properly. And I didn’t do this, and I didn’t do that, then I’d write like, once a month or whatever. I would say don’t do that. Whatever you do, don’t waste your time. If you think you’re good, keep trying and if shit doesn’t come out right, that’s normal. Keep trying. Write more shit, write the next thing. Write 15 songs so that at least five of them are good or whatever it is, you know?”

OF CHANCE AND TRASH

“I’m actually giving myself a fucking chance. It might not be the greatest chance but it’s a chance. I don’t really have a good reason for why I didn’t do shit, I guess I’m fuckin’ stupid. That’s what I’d say it is. But I guess I’m maybe being less stupid now. Nothing I am doing is any more remarkable because I am doing a lot of songs. It’s more remarkable that I didn’t do songs before. I had my first solo project come out in 2015 when I’ve been rapping since 2001. Something doesn’t compute, you know? Something doesn’t make sense. Other people might be trash, but at least they tried. (laughs) They had a work ethic and they get more results out of their trash than I do out of a treasure.”

“I get it all out in recording now. You get something lifted and you don’t know what it is because you never did your work properly. Then you do it and all of a sudden it’s like ‘That’s why I was always so fuckin’ pissed. Because I wasn’t doing my favourite shit.'”

“Even if you started rapping at 39, don’t judge freestyling. I hate that shit. The best freestyle can end up sounding shitty 50 per cent of the time, but people that can freestyle can write. Most rappers that only write can’t freestyle.”

ON BEING HARD ON HIMSELF

“I have to because it’s consistent. If I’m gonna be that way, it’s with fairness to every element of life. I’m not gonna say someone else is trash and then if I write some trash accept it for myself, either. I’m equal to them at least as a starting point.

“I have to be hard on myself, otherwise I’d be a hypocrite. For raps or for anything in life. If somebody in your family or your friend or whatever it is does you dirty, and you don’t like it, but you would do the same, it’s just not proper. You gotta take account of it the way you are trying to make them feel accountable, at least. If someone is gonna be chill about doing something shitty to you, they gotta at least be chill about someone doing something shitty to them. It works the other way.”

ON COLLABORATING WITH THE HOMIE

“BK Brooks (Art Cons, Swearwolf) did half the mixing. He mixed every beat that was his, and he produced six of the beats, six crazy beats. And he mastered the whole thing. So he put it together as a project. He did the thing, and I hope that the people are gonna get to hear six of his fire-ass beats. He’s a huge part of the album. You could almost say he’s a bigger part of the album than I am. As far as it becoming an actual, cohesive project that is out here for people, he had the biggest role.”

“It’s a friendly album. It’s true. People don’t understand that I’m not malevolent. My rhymes sound like I’m some kinda, like, malicious, instigating misanthrope. (But) it’s an anger that a lotta people could relate to, and they have been. You know what I realized, the people who say ‘Yo, I have the same kinda problems,’ actually have the same kinda problems in their lives. We just don’t see it that way, because it comes in a different form.

“There’s always a double side to everything. Like me saying I was an idiot who didn’t do a solo project for 14 years. Like, who comes out that this good? Who starts off as good as I am right now? Bars are just jumpin’ into my head (to the point) that I can’t even listen to rappers I used to look up to. That’s cocky shit but that’s how the fuck it feels.

“I been practising for 14 years. That’s unique. I should appreciate that. You can tell from my rhymes that I’m a glass-half-empty type of person, but (I’m) half full about this. It’s cool to come out and be good right away.”

“No music is for everyone, but a lotta people act a little reluctant and then secretly listen to it themselves. That’s what we do in Montreal rap. Even though you don’t really like someone, you’re still gonna check out their songs, because we’re curious. And if it’s good you can tell it’s good, so you can lie to yourself and everyone else who sucks, but you know what’s good. You might not publicly show it. And you know what? Even people that like you will do that, too. I’m not afraid of that, and that’s what makes me different from other people.” ■