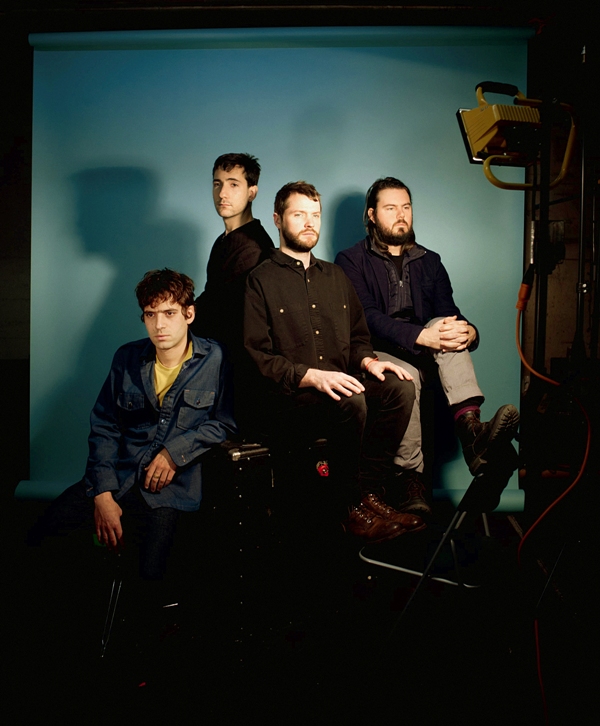 Since Suuns released their sophomore album Images du Futur in March 2013 (when they were the first band to ever appear on the cover of Cult MTL), the Montreal four-piece has spent a lot of time cultivating their European fanbase. Their rock/electronic fusion, informed by krautrock’s drones and motorik rhythms, is simply a better fit in countries like France and Germany, where their brand of experimental music is more deeply embedded in the culture. North America has been “okay” to them, according to drummer Liam O’Neill, but Suuns have been known to clear a room.

“We’re no strangers to that,” O’Neill says, telling me about a recent experience in the north-western Quebec town of Rouyn-Noranda, where “everybody left” minutes after the band started playing. “Sometimes being a somewhat progressive band backfires on you.”

Luckily the worst situation they’ve faced in the U.S., specifically the American South, pales in comparison to what bands like the Sex Pistols had to deal with in the 1970s: playing behind fences to reduce cuts from breaking beer bottles, and occasionally being beaten up after shows.

“We got the civilized equivalent of that in Nashville, by being musically blown out of the water by the country band that played before us,” O’Neill reports. “(The audience) didn’t have to throw bottles — we were destroyed so completely on a musical level that I think people just felt bad for us.

“It was really an amazing band — they played really good songs and the singing is really good, in a conventional way, and then we get up there and do our thing, which is completely not that.”

Suuns’ “thing” is darker and more abstract; perhaps not dangerous or threatening in the way that truly novel avant garde acts used to be perceived, but certainly menacing, and mesmerizing. Their live show has been warmly received all over the world, including in North America, but based on the band’s experiences, O’Neill theorizes that the experience of going to shows has become commonplace in larger cities on this continent.

“There seems to be more ennui or apathy with the concept of going to a show,” he says. “It just seems to be a hassle for a lot of people, because they’d rather just go out and drink and not have to be involved in a communal experience, which seeing a band is. But I can be the same way sometimes, so maybe there’s a different appreciation for a live performance in other parts of the world.”

Suuns have Dutch booker Bob Van Heur to thank for playing off-the-beaten-path locales like the Azores Islands and Macedonia.

“I don’t know where this comes from but he has this idea that we’re one of those bands that plays in the far-flung corners of the world. I think he thinks we’re more interesting than we actually are, but he really believes in us and is constantly pushing to have more people exposed to our music. He’s kind of like our exotic travel agent, and basically we’re just always down. Our job is to make the best records we can, to play live as well as we can and after that he puts us where he wants. We’re just along for the ride.

“He wants us to go to Tanzania next year ’cause a friend of ours has a place there. He helps kids act in circuses and somehow Suuns will be involved in that. I don’t know how well the genre is gonna mesh there. But it’s amazing the number of places we’ve gone where I’m sure we’re completely unknown as a musical act, and how receptive audiences have been. Most places we go, the shows are fun and audiences are super appreciative.

“It’s pretty weird music for people who aren’t used to it to be into. It’s conceptual and sound-based, and the songs kind of work on an idea of their form. I don’t know what the appeal is (laughs).”

The new Suuns record Hold/Still, launching with a show in Montreal this week, is a compelling listen, an extension of Images du Futur (and to some degree the collaborative record they made with Jerusalem in My Heart in 2014) that deepens their sonic pool and furthers their go-to thematic touchstones of desire and unease.

The record was made a year ago in Dallas, TX, far from their comfort zone — Montreal’s Breakglass Studio, where they’ve previously worked with Jace Lasek.

“The way we did this one was a lot less polished and a lot quicker,” O’Neill says. “John Congleton, our producer, really likes to move quickly; when an idea’s not working immediately, he likes to throw it out and move on to something else. That lends itself well to improvisational playing, which we’ve always done a certain amount of in the studio, but a lot more on this one.”

The band worked 10 a.m. to 6 p.m. daily before heading back to make dinner and chill in their Air BNB. Though they did get out in the city a little bit, conditions were more conducive to holing up in the studio.

“It was storming like crazy. It was oppressively hot and I think it rained more in five days than it had in any previous year in Dallas — the river almost consumed the bridge. So it was a pretty intense vibe, but it was rewarding to work like that. It wasn’t as fun or funny as recording our previous albums, and you can hear that — it’s a pretty closed sound, and pretty loose.”

As for Congleton, his impressive discography (St. Vincent, Swans, Chelsea Wolfe, Xiu Xiu, the Polyphonic Spree, the War on Drugs etc etc), and the fact that he sought Suuns out, is a testament to the band’s appeal.

“He came to one of our shows in Dallas and approached us and said he’s a really big fan and he would love to do a record with us,” O’Neill says. “He’s a really passionate guy — he believes in the goodness of music and he thought we could do something together, and he was really persistent about it. We were looking for a little bit of a change we didn’t exactly know what we wanted, but we thought it might  be fun to go somewhere else so it was a no-brainer. He makes great sounding records and really believed in our band, and that’s all we needed.” ■