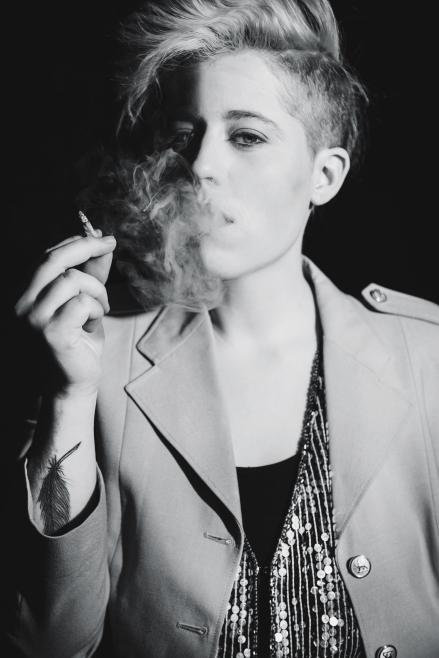 In April 2015, when Samuele wrapped up recording Z’album (a zine-album hybrid), she had no expectations for the project other than recording the tunes she’d been performing for over a year as a “femme-orchestre,” playing shows in people’s homes around Montreal and in neighbourhood joints in Hochelaga-Maisonneuve where she resides.

Proud of what she and her band had accomplished with Z’album, Samuele sent Z’album off to the 19th edition of the Francouvertes, a pivotal showcase contest in Quebec for launching artists who perform in French.

When Samuele got the news that her entry was selected, she was surprised, then excited and quickly nervous. After re-sparking her love of music following some time away, the thought of stepping back into the realm of the industry dredged up some fears. It was during soundcheck before her performance at Francouvertes, when nerves and stage fright arose, that Samuele made a deal with herself. “It had been a really bad day and I told myself: either people are on board and it works or I’m leaving to the countryside and growing vegetables and I stop this. Both ideas sounded good to me.”

Samuele’s arrestingly honest performance and wordsmith abilities won over the audience, although if you ask her, she’ll half-jokingly credit her haircut. The response to her performance during the showcase led her to connect with a team that had a genuine approach which allows her to focus on her music while they engage with the industry aspects.

She also wrestled with the idea of stepping out of underground circuits to the mainstream. A vivid dream shortly before the showcase answered some of these questions and she awoke with the thought: “What if just being myself in the public wakes a thing or two? What if I do this and I can reach people?”

As she has explored different outlets for her songs, her songwriting process has also changed over the years, although one thing has remained constant: “First and foremost, it’s poetry. Maybe the rest is a pretext.

“You know,” she adds, “choosing to put your art in the centre of your life when you have a child is not what people encourage you to do. I tried other things and it wasn’t for me. I’m happy it’s working but most of all I feel lucky. It’s all intuitive in terms of where I feel my place is. I want to make the world a bit better. I have a feeling that my place isn’t in the mainstream and isn’t in the underground, but somewhere in-between.”

As a regular volunteer at Rock Camp for Girls and a proud fan of She Shreds magazine, Samuele is no stranger the importance and power of representation in the media and on stage. Already, Samuele is seeing people connect with her music and in post-show conversations she’s hearing from folks that really appreciate the unabashed feminism she brings to the stage.

Influenced in her adolescent years by Ani DiFranco, Samuele says, “Discovering her was really something. It gave me the feeling that I could be who I am, basically. I really admired the way her discourse is engaged and humane. That’s the way I like being told about something. It’s almost like when things are too rooted in politics I lose the plot. That’s very inspiring for me and the way she plays the guitar is amazing.”

Her favourite band these days is PWR BTTM, a queercore  garage punk duo from New York. “They make me miss having a rock band so much that I’M starting one,” Samuele says, a grin stretching across her face. “I am a lot more punk than my music.

“In terms of artists that I’m always blown away by,” she continues, “there’s tUnE-yArDs, St. Vincent and Courtney Barrett. All people with a unique character. I mean, tUnE-yArDs’ on stage persona is nothing like my own stage presence, but it’s really something that moves me and speaks to me. She makes solid music, really great. These musicians energize me.

“For inspiration, I was recently searching for something outside of songs and I happened upon Andrea Gibson and Lauren Zuniga, two amazing queer spoken word artists. It gave me the idea that I can do that, too: Just words, no music — I think it can be super liberating. When I have a lot to say, one song usually isn’t enough.” ■