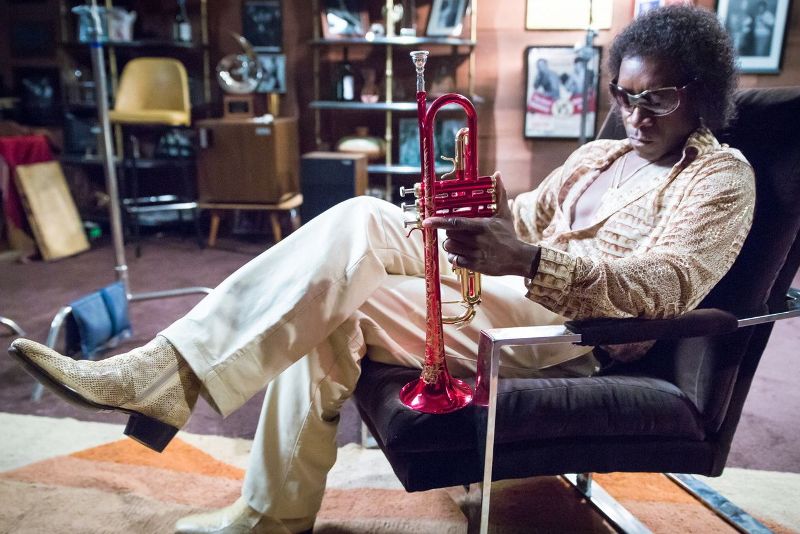 Don Cheadle as Miles Davis in Miles Ahead

How could you possibly even begin to describe Miles Davis’s music? The answer is simple: just listen to it. The same can be said about Miles Ahead, the new biopic starring and directed by Don Cheadle. By using an experimental and creative approach, you could almost say that Cheadle does to film what Miles Davis does to music.

Miles Ahead begins in the late 1970s, a time when Miles Davis actually stopped performing and became a near recluse. Desperate for new product, Columbia Records sends out reporter Dave Braden (Ewan McGregor) to investigate. Furious at this, Davis (Don Cheadle) immediately confronts the label about missing royalties and refuses to surrender a tape of alleged new music.

“Do not fear mistakes, there are none.” — Miles Davis

The film revisits key periods in Davis’s life in the form of memories triggered by moments, instruments and even record sleeves. We’re transported back to historic sessions with Gil Evans, rehearsals with his Second great quintet and the moment he meets his muse and first wife, dancer Frances Taylor (Emayatzy Corinealdi).

With the blessing of Davis’s family, Cheadle set out to make a film in the spirit of the jazz legend. The story avoids telling straight facts and rather chooses to adopt an improvisational jam session approach. Not to say it’s disjointed — once you free your mind from any preconceptions, the film carries you much in the same way Davis’s music would. 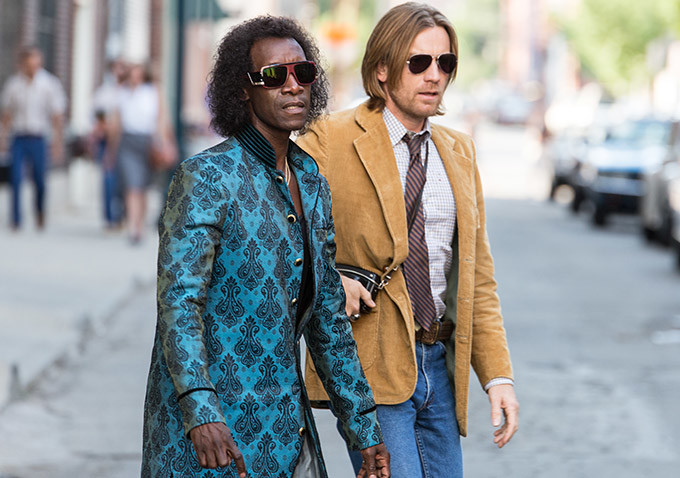 Cheadle with Ewan McGregor in Miles Ahead

Many themes are left open to interpretation, making this a film to be viewed more than once.

The music guides the story through Davis’s complex emotions. Surprisingly, Miles Ahead employs deeper cuts than you would expect. Songs like “Duran” off Davis’s Directions cleverly set the tone of certain scenes.

Having played saxophone since his teens, Cheadle understands how to let the music be the dialogue. The actor turned filmmaker was involved in nearly every aspect of the project even co-writing material with jazz pianist Robert Glasper, who had the task of recreating some of Miles’ music for the film.

“Knowledge is freedom and ignorance is slavery” – Miles Davis

If you’re expecting to see a traditional biopic of Davis’ life, you’re better off watching a documentary or reading a book. Now if you want to immerse yourself in a story that explores the depth of Davis’ music and character, Miles Ahead is an honest portrayal of an ever-evolving artist who keeps you guessing every note of the way. ■