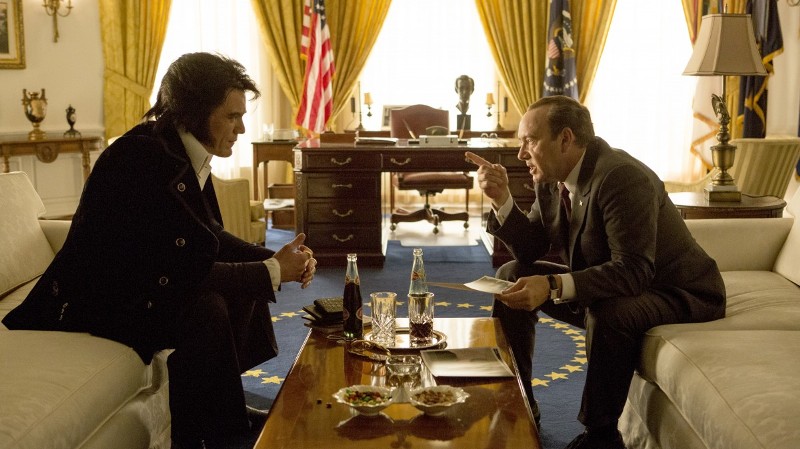 Everyone’s seen the picture: Elvis Presley in his typical getup, big shining metal belt, towering hair, shaking hands with the dumpy president who would, a few years later, claim he is not a crook despite very much being one. It’s such a widespread image (the credits tell us it’s the most requested photograph in the history of the National Archives) that most of us feel we have an idea of what happened, even if we don’t. It’s the kind of thing that could even never have happened and it would’ve entered the popular lexicon anyway.

It’s also not much to hang a movie on, in truth. There are no transcripts of what happened in the Oval Office that day, though everything leading up to it is heavily documented. Elvis & Nixon therefore becomes a bit of historical fantasy that’s nevertheless rather slavish to what facts we do know.

It’s 1970. Pissed off and confused about the current state of the world (with its Beatles and pot smoking and rioting in the streets), Elvis Presley (Michael Shannon) travels alone to the Memphis airport and boards a plane to Washington, D.C. His goal: to get President Nixon (Kevin Spacey) to make him a special undercover agent so he can bust druggies and other degenerates in order to clean up the streets. Soon flanked by his buddies Jerry (Alex Pettyfer) and Buddy (Johnny Knoxville), Elvis begins the interminable discussions with Nixon’s staff (Colin Hanks and Evan Peters) that lead to the inevitable meeting.

Neither Shannon nor Spacey particularly look like the larger-than-life icons they’re portraying; while make-up has done a passable job of turning Spacey’s receding hairline into a reasonable Nixon facsimile (the film is much more focused on Elvis; the majority of Nixon’s screen-time comes in the third act), Shannon’s Elvis looks and acts more like Michael Shannon than anyone else. This isn’t necessarily a bad thing – this isn’t a film that requires jaw-dropping dramatic range, and there’s something interesting in seeing a semi-jokey portrayal of Elvis that feels grounded and earthy at times. Of course, this movie Elvis can’t resist a karate chop or a “Thank you, thank you very much,” but that’s par for the course in a movie called Elvis & Nixon.

What’s really more bothersome is that there really isn’t that much depth here. Nixon and Elvis being such iconic characters means that they’re only given some cursory fleshing out; the most developed character is also the most boring one, Jerry Schilling. As Elvis’s old buddy and little angel-on-the-shoulder, he gets a feeble attempt at a backstory as his girlfriend (Sky Ferreira) waits for him to get back so he can meet her parents. There’s something like 10 times more hemming and hawing from Schilling about this plot point than there is anything about Elvis or Nixon’s lives beyond the very immediate present, which preserves the semi-legendary murkiness of the whole meeting, but also puts all of the film’s emotional stakes in the hands of the one guy who had so little charisma he wasn’t asked back for Magic Mike XXL.

Before seeing the film, I figured that Elvis & Nixon would take on some of the worst instincts of sketch comedy. I imagined the meeting being broad-side-of-a-barn obvious, full of mugging and shoehorned references. It is that, in a way; that also happens to encompass the best parts of the movie. What I hadn’t planned for was all the stuff not about Nixon or Elvis — you know, the stuff that makes this movie a movie and not just some kind of thing used to pad out the Oscars in case the teleprompter goes bust.

Elvis & Nixon is fun and inconsequential by design. It isn’t meant to revel in the demons of these characters but simply put words and images to a situation we’ve all imagined. It succeeds in doing that to a degree, but all of the white noise that comes with it distracts. ■