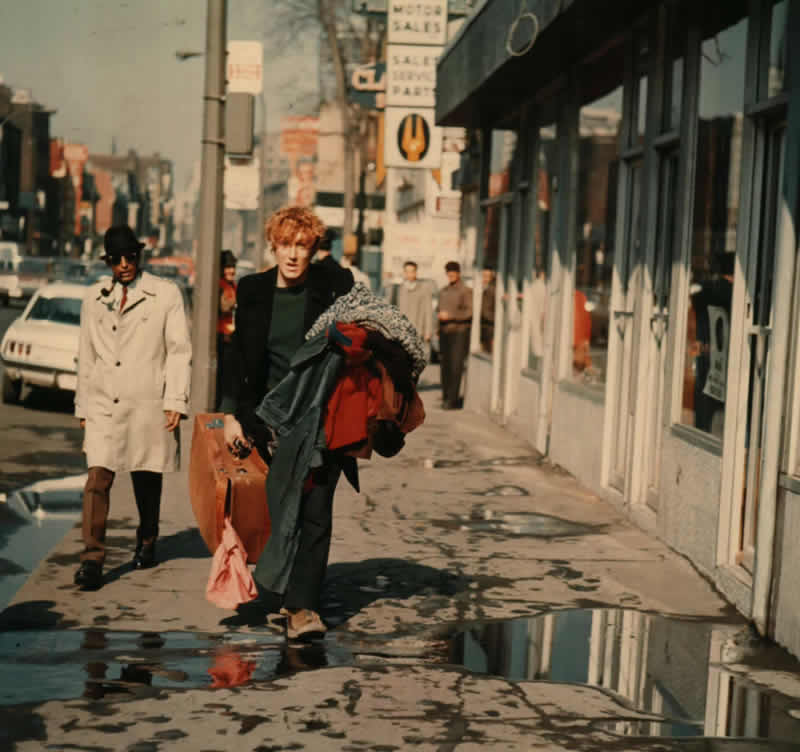 Alexis Kanner in The Ernie Game

Does Montreal play itself? It certainly does.

Notable local talent: Lead actor Alexis Kanner grew up in Montreal, though he did the majority of his work in the U.K. (including a stint on The Prisoner). He would return periodically to Canada to work on different projects. There’s also a party scene in which a young Leonard Cohen performs a song — Cohen’s only appearance in a fiction feature film, though he doesn’t do much actual acting in his time on-screen. There are also some notables working behind the scenes: prolific documentarian Martin Duckworth is credited as the camera operator, the late Robin Spry as assistant director and Jean-Claude Labrecque as cinematographer.

Most egregious local landmarks: Ernie strikes up a conversation with Donna while walking at the corner of a nearly unrecognizable Ste-Catherine and St-Marc (identifiable by the awning of the Shopwell Groceteria, 1866 Ste-Catherine W. — now a dépanneur), then harasses some passersby in front of what is now Nouilles Star across the street (the red brick columns remain). Later, he meets an old friend on the platform of Guy metro; since the metro was inaugurated in October of 1966 and this film ostensibly filmed that winter, this may be the earliest instance of the metro in a film. It’s certainly the cleanest and brightest you’re ever likely to see the station. In fact, the vast majority of the film’s exteriors are of Ste-Catherine, but the film’s unobtrusive camerawork often keeps it at street level, making The Ernie Game’s Montreal look significantly different than the neon-strewn pictures that survive today. 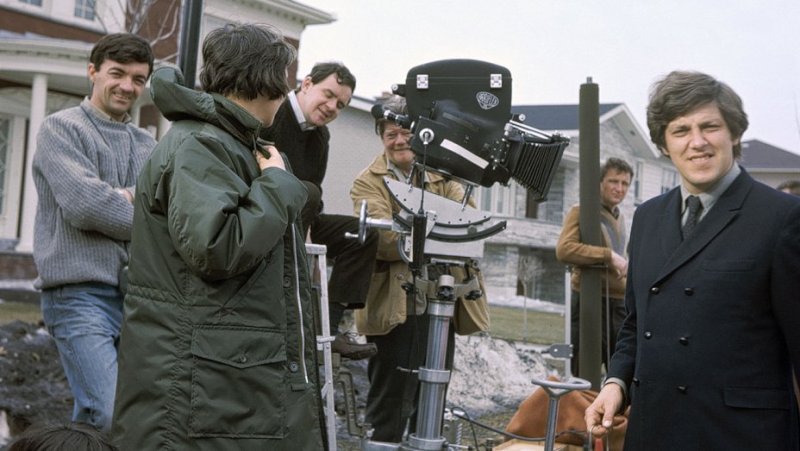 Don Owen on the set of The Ernie Game

When filmmaker Don Owen died in February at the age of 84, he received a considerable amount of tributes that somewhat surprised me. It’s not that he didn’t deserve them; it’s that I had no idea if he did or not because his films were completely unknown to me. That’s a fate, unfortunately, that applies to a lot of filmmakers who did the majority of their work at the NFB in the 1960s and ’70s.

While these films flourished at the time (Owen’s previous film Nobody Waved Good-Bye was one of the first films out of English Canada and The Ernie Game played many festivals), they’ve since been relegated more or less to the dustbins of history. English Canada isn’t particularly good at celebrating its own catalogue and keeping its own canon alive (Quebec does a considerably better job — not to mention their fiction feature output is much larger), so The Ernie Game was a complete mystery to me. Thankfully, the NFB has made The Ernie Game available for free streaming on its website, which is really the most convenient way to solve this kind of mystery. 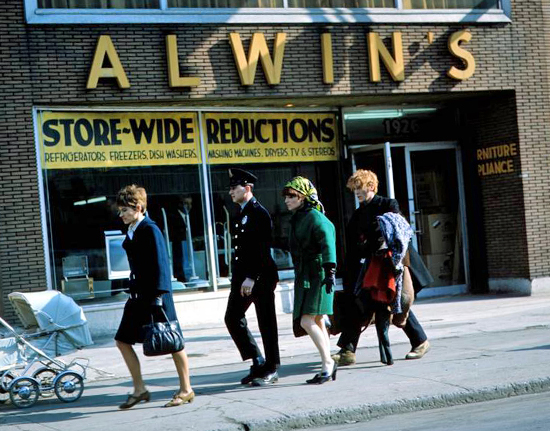 Freshly released from a mental institution, the volatile Ernie Turner (Kanner) finds himself at loose ends with no place to stay. Jobless, he’s incapable of paying for his room in a rooming house, effectively rendering him homeless until he starts a tentative relationship with single mother Donna (Judith Gault) while also half-heartedly pursuing an ex (Jackie Burroughs). Impetuous and immature, Ernie requires too much of the people around him and takes anything but total devotion as an insurmountable affront. He kicks around town pointlessly and, even if his story with Donna veers into happiness, he never really finds stability in life.

Although the adjective “of its time” is mostly used to explain away racist things said by old people these days, it’s very much the best way to describe The Ernie Game. It mixes British kitchen-sink drama with the sort of wasted-youth disillusionment that would become more rampant in American cinema a few years later. It has a loopy psych-pop soundtrack by Toronto-based band the Kensington Market that sometimes works and sometimes is corny as fuck. It has gritty, documentary-like camerawork that somewhat betrays it as a product of the NFB. It’s sometimes absorbing and sometimes tedious, affected negatively by its ambling pace and relative lack of structure. It’s exactly the type of ’60s movie that dedicated something like 10 per cent of its runtime to sequences of its characters walking for no apparent reason if perhaps to run through some of the music that was expressly written for it. 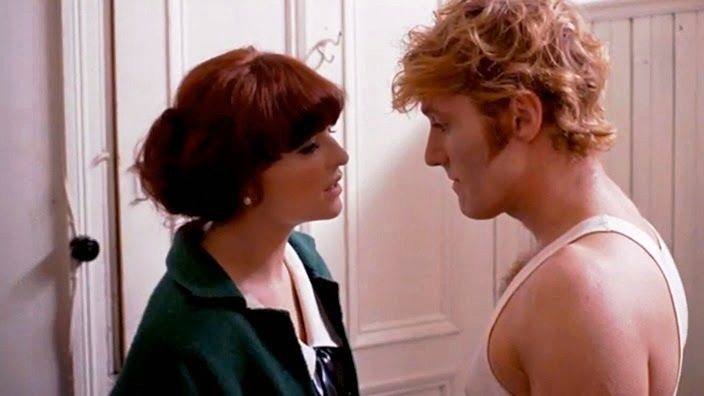 The Ernie Game does do some things remarkably well. The character of Ernie and Kanner’s portrayal of him are both terrific — he’s a complicated mess of childish emotions, temperamental outbursts and genuine pathos. He’s an unlikeable character that the viewer nevertheless manages to build empathy for; while it’s true that many of these post-Holden Caulfield angry young men of the silver screen seem like they’re engaged in a deathmatch to crown the most petulant shitstain, Ernie Turner remains a multi-faceted and realistic creation. 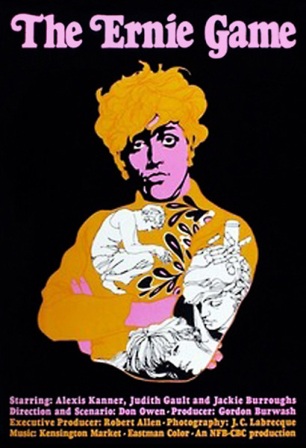 Also interesting is the way the film deals with social issues of the day by not really dwelling on them too much. The year 1967 is prime territory for gauche attempts at social relevance — and indeed, some of the Québécois films of the same period have not aged particularly well in regards to their handling of the two solitudes / Vietnam / race / whatever. It’s telling that when it was revealed that Donna’s other paramour is black, I expected some Guess Who’s Coming to Dinner-style handwringing (the film suggests that Donna, too, is prepared for such an occurrence) but it’s just treated as a fact of life. Same thing goes for Ernie’s interaction with Donna’s grumpy old franco neighbour, who seems poised to launch into a whole tirade, but Ernie’s complete and utter self-absorption means there’s really no need.

The Ernie Game’s relative obscurity is undeserved, but not that surprising. It’s very unique in the limited landscape it was made and released in, but rather similar to many films of its ilk. It doesn’t have the kind of depth that something like The Loneliness of the Long Distance Runner would have and doesn’t benefit from the permissiveness that would break open the possibilities of film a scant few years later. It’s a solid film and an incredible time capsule of 1960s Montreal — and worth seeking out on those strengths. ■