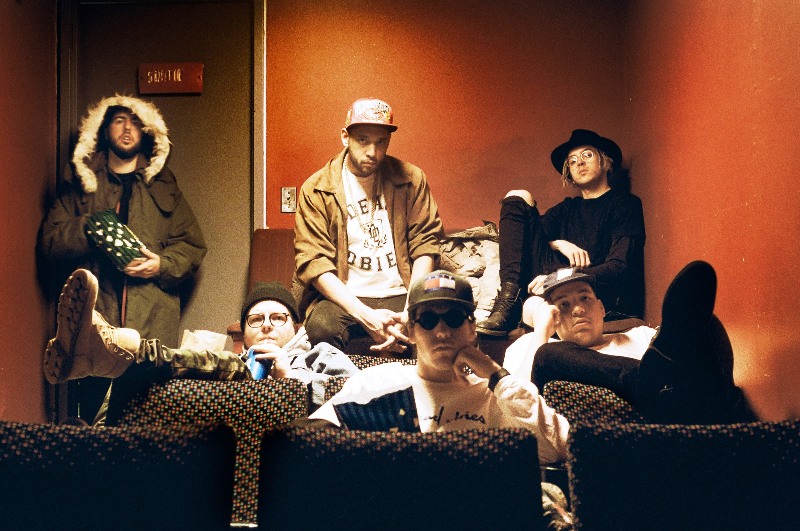 Little crews of three and four gradually fill out the small capacity of Phi Centre’s standing-room venue, eventually coming shoulder-to-shoulder, 200 as one, eager for the second of three sold-out nights with Dead Obies to commence.

Last seen weeks earlier turning lower St-Denis Street into a moshpit while warming up for Grandmaster Flash, the Obies have had no shortage of momentum propelling them since their casual 4/20/2012 arrival on Quebec’s laptop speakers with their weeded-out, interactive live-stream release of a first full-length, Collation Vol.1.

Signed in 2013 to Quebec boutique label Bonsound for the release of their debut proper, Montreal $ud, the Dead Obies have since conquered nearly every stage in the province, from tours to high-end festival billings, to every party boat and peeler hall between.

Now it’s mid-October of 2015, and tickets for this three-night-stand have long since been snatched up by DO’s most faithful following. As much as we love sweating, bouncing and pummelling in unison to the strains of “Tony Hawk,” “What It Is,” “Trafic,” et al, tonight, we’re gathered as part of something entirely new.

Dead Obies are recording their label sophomore, a full set of new music to be titled Gesamtkunstwerk — a German term encompassing a totality of experience, a synthesis occurring between performance or production and audience engagement; a “total work of art,” according to common translation.

Joining the young-blooded, steady flowin’ five MC, one producer force on this excursion are key players from Montreal multi-genre improv institution Kalmunity. DO beat blender VNCE wields the pen for the group’s sonic signature. His trippy, drum-clap-happy, sinister-bass-heavy back end provides limitless range upon which the diverse, expressive textures that vocalists RCA, OG Bear, 20some, Snail Kid and Yes McCan blend on mics aim toward with individual precision in the mix.

So this right now is a gambit, a career move turned social experiment. The fans present are a loyal lot, accustomed to the sight and sound of les six as we have come to understand. We know we want more, but standing here in anticipation, it’s not clear what that even means.

What’s about to transpire behind the curtain screen onstage — currently broadcasting a black and white montage film, post-Marxist agitprop narrated by a stern, male, voiceover — is something we can all hold, together, if it indeed holds together.

Bonsound label founder Gourmet Delice is nearby and I ask him about the film, which has now been playing uninterrupted at increasing volume for nearly an hour.

“C’est la Société du Spectacle,” he begins, but the discussion ends abruptly when the lights dim and we separate towards our respective posts for showtime.

It’s now late February, and DO rapper Yes McCan and I are in deep conversation at the band’s Ontario Street East studio, in the same building that houses A’Shop. The spoils of their merch game are apparent — this place isn’t covered in egg cartons. We listen to some blues funk, a few beats as we talk, and McCan offers to play me some of the original, pre-band recording versions of the new music.

I’ve been listening to Gesamtkustwerk, out March 4, for nearly a month at this point. The mix of live sound and audience noise on the record is not Cheap Trick or Frampton. Everything becomes part of the music, and if you were there, it takes you back, every time. Unless you’re with the Roots, hip hop is not known for live projects. The Obies have effectively bottled the magic. The art is whole.

“When we were tracking the album, we all had different schedules and stuff,” McCan tells me. “So I could come in and open up a beat, and maybe some of the boys changed something. Then I work on it and record what I feel, and then leave it. Someone maybe comes in the morning, checks what I did, and oh, there’s a new hook, or a verse has been added. And they go from there. Then, when possible, we all listen to the results and decide what stays and what goes.”

“My grandmother used to live in a residence where there were puzzles out on tables in the hallways. People could just add a little if they wanted. It reminds me of that. Like making a puzzle.”

I ask about the film that screened at the beginning of the October sets. It had the look and feel of a German propaganda flick and I want to know where it fits into the album concept. He organizes his thoughts.

“Do you know…have you heard of the Situationist movement? Or Guy Debord?”

McCan proceeds to enlighten me on the post-Marxist ideology and the notion of consumerism as prank. Apparently the early punks were super down. “La ‘spectacle’,” McCan explains, “c’est un detournement,” or a hijacking of a situation; the creation of a false experience to reflect reality and create a moment that is forced, but therefore true. Or at least, that’s what I can gather.

Hanging out with Yes McCan is like cutting philosophy class to get high with the top student. All six Obies find their place and voice on Gesamtkunstwerk, but chatting with McCan brings it back to the beginning: party boys with talent to spare, bringing out the best in each other, in concert.