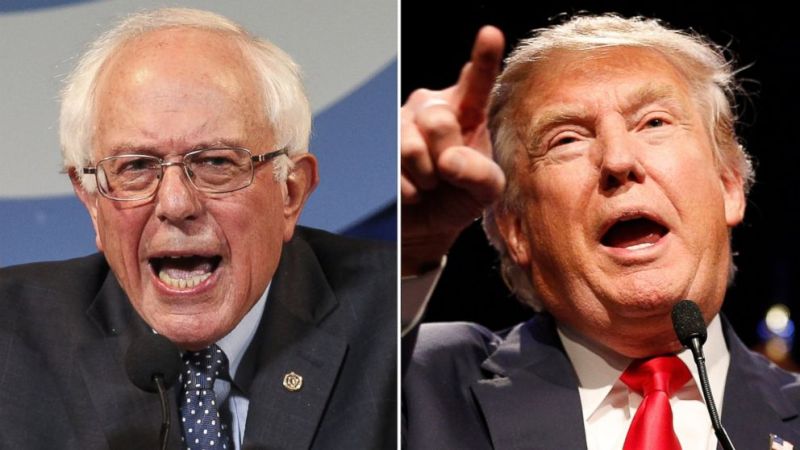 Donald Trump and Bernie Sanders have been dominating the media coverage and public discourse surrounding the American presidential primaries.  Both candidates are running unorthodox campaigns and their messages are striking a chord with a lot of Americans. To their supporters, both men come across as honest, employing authentic rhetoric that doesn’t seem censored by political correctness or campaign donations. They’re both seen as two political outsiders, fed up with how Washington is operating, and Americans who feel the same anger are swarming to their campaigns. They’ve got a lot of attention, but can they actually win their parties’ respective nominations? The answer to that question may lie in each party’s complicated primary rules.

First, a little primer on presidential primaries in the United States: There’s nothing in the American constitution about primaries, or their roles in elections, so the parties (both national and state chapters) take it upon themselves to decide how their primaries will play out. This leads to a confusing process that takes months to decide, with procedures different in each state. The basic concept, though, is about the same on both the Democratic and Republican sides.

Basically, candidates compete within their party for delegates from each state to represent them at their party’s national conventions in July. The candidate who earns the majority of the party’s delegates becomes the party’s nominee in November. The Republicans have 2,472 delegates available, with a simple majority of 1237 needed to secure the nomination. Conversely, 4,763 delegates will attend the DNC convention, and a candidate will need to have earned a majority (2,382 delegate votes) to become the nominee. (See a running count of delegates on both sides here.)

There are a few ways that states gauge a candidate’s popularity in their state and assign delegates accordingly. Most states use a traditional primary election. This is just like a general election, with voting booths and ballots, but the right to cast a vote is limited to eligible voters who are registered within a party before the primary. This is called a “closed primary.”

The third and final type of primary isn’t an election at all, but rather a caucus. The first caucuses were held in Iowa on Feb. 1, officially kicking off the election season. A full explanation of the caucus system would take far too long, but caucuses basically consist of a room full of people voting by raised hands. Supporters try to convince undecided voters to come stand on their side of the room, and the majority wins. An important thing to keep in mind when thinking about individual caucus results: vote total doesn’t actually matter in a caucus. A simple majority of available votes is all that matters. A candidate can win a caucus room by one vote or 100, but the impact on the state’s results remain the same.

HOW THE DEMS AND THE GOP DO IT DIFFERENTLY

On the Republican side, 17 states and territories opt for the caucus style primary, with 19 choosing to do so within the Democratic party. Only 16 per cent of the total delegates are up for grabs in those 19 states.

The results of the Iowa Democratic caucuses were historically close, with Hillary Clinton edging out Bernie Sanders 49.9 to 49.6 per cent. Iowa uses a proportional allocation method to distribute their delegates, so Clinton earned 23 of Iowa’s 52 delegates.  Sanders finished with 21. If you think that doesn’t add up, you’re not wrong, but more on that later.

In the Republican primary in South Carolina, held on Feb. 20, Donald Trump won South Carolina pretty handily, securing 32.5 per cent of the vote among a field of six candidates. He finished with a similar percentage of support in New Hampshire, finishing close to 20 per cent better than his closest competitor, but he only received 10 of New Hampshire’s 23 delegates. But because South Carolina uses a winner-takes-all allocation, Trump went for the sweep in the Palmetto State, claiming all 50 delegates. After the first three contests, Trump now has amassed 67 delegates. His nearest rival, Ted Cruz, only has 11.

The nature of the Republican field this year and how the Republican National Committee allows states to set their own allocation rules seem to be helping Trump’s candidacy so far. Having a lot of candidates on the Republican side aided Trump’s chances in South Carolina. Because there were so many candidates opposing the New York billionaire, no single candidate could gather enough support to challenge him in the state. As such, with less than a third of the vote, he ended up winning all the delegates. Because other candidates, such as “establishment” Republicans John Kasich, Marco Rubio and Jeb Bush (who suspended his campaign after finishing a disappointing fourth place in South Carolina) tend to compete for voters who are similar ideologically, they ended up splitting the “establishment” voting bloc. If one of these candidates had dropped out prior to South Carolina, another may have gotten enough support to mount a strong opposition to Trump. If two of those three men had suspended their campaigns, the numbers show the remaining candidate may have beaten Trump.

It’s all speculation, of course, but many “establishment” Republicans would never consider voting for Donald Trump, and the sum of these “establishment” candidates’ poll numbers easily surpasses Trump’s, at a sizable 37.9 per cent. Trump may maintain his momentum as long as he has multiple weaker opponents due to these varied allocation rules. They may prove crucial to Trump’s continued success, as a whopping 69.3 per cent of delegates are from states that use either winner-take-all or hybrid allocation methods, including delegate-rich New York, Florida, California and Texas. Although most within the Republican National Committee detest the idea of a Trump nomination, his candidacy may in fact be aided by the RNC’s laissez-faire attitude when it comes to regulating states’ delegate allocation rules.

In the Democratic primaries, the other outsider, Bernie Sanders, is more likely to be hurt by the DNC’s rules than helped. This is due to “superdelegates.” A superdelegate is a delegate who doesn’t have to vote the way the people of their state voted, and can choose at the convention who they will be supporting. They’re unique to the Democratic party, although Republicans did have a similar system with a type of delegate known as “unbound.” Following a rule change within the party this year, however, unbound delegates’ votes will not be counted unless they vote along the lines of their states’ results, eliminating their autonomy. At this point, only delegates “released” by candidates who have dropped out are truly unbound.

Democratic Superdelegates are usually important elected officials from a state, such as a governor or senator. This explains the gap in the arithmetic on the Iowa results stated earlier.

Of Iowa’s 52 delegates, eight are “super.” Six of those eight have committed to voting for Clinton in July, with two remaining uncommitted at this time. Adding these in, Clinton actually won 29 delegates in Iowa, making the results not so close after all. Clinton has a big head start nationally among superdelegates, and because of this, she holds a commanding lead in the total delegate count.

Because of the superdelegate system, Clinton and Sanders both received 15 delegates from New Hampshire, mitigating the results of Clinton’s 21 per cent loss. Nationally, Clinton now has 502 delegates to Sanders’ 70, in large part due to these superdelegates. This superdelegate deficiency will be a major challenge for Sanders to overcome if he’s going to win the nomination.

Why are the Democratic superdelegates supporting Clinton in such large numbers over Sanders? This is where Sanders’ history as an outsider — a major selling point for his campaign — comes to hurt him. Sanders was a lifelong independent, sometimes actually running against Democrats in his home state of Vermont. A run for the presidency would hardly be viable as an independent, however, as history shows that third party or independent candidates have always done poorly in general elections. Independent Ross Perot fared best in 1992, finishing with almost 19 per cent of the popular vote, but he didn’t actually win any single state. He finished with zero electoral votes.

Recognizing the importance of having a major party’s support, Sanders decided to run as a Democrat when he announced his candidacy on April 30, 2015. Since then, Sanders has only received three endorsements from major Democratic elected officials. Clinton has received dozens of endorsements from Democrats, including many from Sanders’ own colleagues in the Senate. Sanders hasn’t been endorsed by any senators or governors.

According to FiveThirtyEight, who are tracking political endorsements, support from within your own party’s elected officials has historically “been among the best predictors of which candidates will succeed and which will fail.” Superdelegates are typically politicians who have run as Democrats for their entire careers. Many of them feel that Sanders isn’t a real Democrat, and is only taking on the party’s name for political gain. They see his campaign as hijacking their party, a party that Hillary Clinton has been a member of for her entire adult life. Clinton’s been one of the most high profile Democrats over the last 25 years, as the First Lady to a Democratic president, senator from New York and Secretary of State in later Democratic cabinet. By voting for Clinton at the convention, superdelegates may feel they are rewarding her loyalty and service, as well as protecting the best interests of the party.

The prevailing logic is that a divided party will only be weakened in the general election. Party establishment tends to rally behind a candidate early in an effort to give the eventual nominee the best chance in November. With her head start among superdelegates, Clinton is already 20 per cent of the way to the total number of delegates she needs to secure the nomination. Sanders and Trump are both riding big waves of populist support through the first few primaries, but whether each candidate can take advantage of (or minimize the impact of) their party’s complicated primary system rules and win the nomination is yet to be seen.

There’s more to the road to November than meets the eye. ■

The next Democratic primary takes place on Tuesday, March 1, aka Super Tuesday — with primaries for both parties in a dozen states at once.