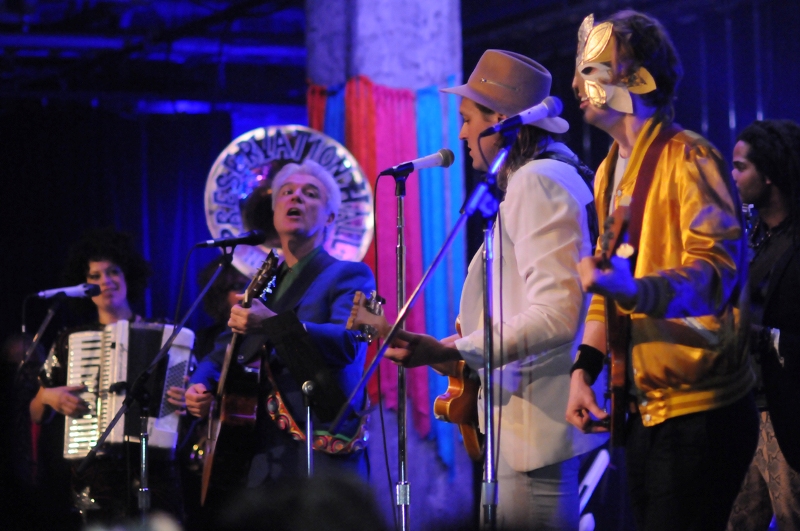 Last Friday’s Kanaval Kanpe was one of the hottest tickets of this early part of 2016, and justifiably so.

The Haitian-themed party meant ti-punches at the bar, rum cakes for noshing on, festive face painting and quick dance classes, and all for a good cause. Although not your typical black-tie gala, the room was a little stodgy at first when Arcade Fire frontman Win Butler took to the (front of the) stage to play some tunes as DJ Windows 98. Butler goaded the packed room full of gawkers into moving – first by asking for the stage lights to be dimmed, then by saying it wasn’t a concert so there was no need to look at him as he performed. Not long after Rara dancers and percussionists took to the stage and something of a real show broke out despite Butler’s protestations. Locals Fwonte and Vox Sambou played short sets and got the crowd moving with their vocal encouragements.

Famed New Orleans troupe Preservation Hall Jazz Band positioned themselves on the SAT stairs, giving the impression they were going to snake through the crowd and onto the stage, but ultimately they played a normal set. That is, until they were joined by Win, Régine and Arcade Fire bandmate Richard Reed Parry (wearing a mask) and crowned king of Kanaval, David Byrne. Together, they played Talking Heads hits “Road to Nowhere,” “Slippery People” and “This Must Be the Place (Naïve Melody).” Most of Kanaval was a loose party, but those three songs were a different beast entirely – an incredibly enthralling 15 minutes or so that felt significant and sounded pitch perfect. As far as renditions of the always awesome “Naïve Melody” go – it’s even one of Butler’s all-time faves – one couldn’t have asked for more. Butler may have wanted a sweaty dance party, but it was the short set with Byrne that stood out most from the evening.

There was also a really impassioned speech from The Office star Rainn Wilson about the need to help Haiti. Wilson hosted Saturday Night Live the week Arcade Fire appeared and they’ve remained friends ever since.

As Kanaval began to wind down, it was off to Haitian-themed restaurant Agrikol on Amherst, which just happened to open that night and is co-owned by Chassagne and Butler. Stay tuned to Cult MTL for more on that new establishment. ■

For more information on Kanpe Foundation, please visit their website.

See a gallery of photos from Kanaval 2016 here: