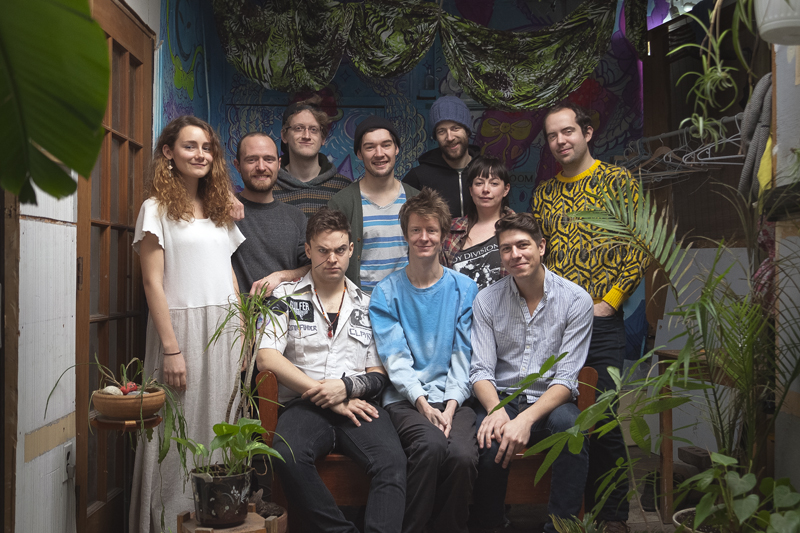 “Oh hi!” I say to a group of Montreal musicians gathered in the living room of a third floor Mile End walk-up.

“Oh hi!” the chorus of voices reply as Saxsyndrum’s Dave Switchenko hands me a can of Labatt 50 before flipping the record on the room’s focal point turntable. What are we listening to? 1981’s eponymous album by the Penguin Café Orchestra. The loungy neo-classical record feels like the right soundtrack for a freezing February hangout with the newly formed collective of musicians tied together by friendship, creativity and a shared passion for eclectic, wide-ranging musical palettes.

The loose collective is composed of a large and fluid core group of musical projects including Saxsyndrum, Smokes, Year of Glad, Bantam Wing, Loon (Tessa Kautzman) and Tamara Sandor (the groups whose members are joining us in conversation) along with Ohara Hale, Holobody, Slight, Commander (Andy) Clark, Johnny Ripper, Wake Island, Sea Oleena and more. Shared experiences such as travelling to forested music fest Duckstock and holding a series of cozy house shows during last winter’s unbreakable cold spell helped to solidify the community to the point where it only felt natural to start organizing projects together.

“The idea is that it’s something where this community of people who often work together, put on shows together and collaborate together can support each other,” says Pat Cruvellier of Smokes. “We’re not acting as a label because we’re not doing publishing or distributing,” he continues, ”but everyone inspires each other and empowers each other to do things and create things.”

The collective launched the project last spring with a compilation CD featuring a sampler of affiliated acts, and followed that up with live showcases during the summer’s Marché des Possibles series and the POP Montreal festival in the fall. This weekend, the members of the Oh Hi collective will be using their creative energy to put on a “fête d’hiver” show in a Mile Ex loft, featuring associated acts Saxsyndrum, Smokes and Loon, plus sets from Devon Welsh (Majical Cloudz), Doldrums, Nanimal and Cheap Wig. DJ Johnny Ripper will keep things lit between sets and Ohara Hale is providing visuals in the form of venue décor and posters.

With the inclusion of artists that favour musical styles ranging from psychedelic and experimental rock to funk to electronic to folk and beyond, the collective is not connected by music genres but a  shared conviction to create art with authenticity and emotional resonance. According to Tamara Sandor, “This is a pretty feelsy group. People are making music that connects emotionally, and being embedded in some kind of community leads to richer work.  Even though we write in different genres, we have commonalities with our process. Music is a healing practice and I feel that people in this group are on a healing journey with the music that they’re making.”

Another thread that connects the artists is a strong commitment to openness and inclusivity. “It’s come up since the very beginning,” says Gregory Burton of Bantam Wing. “The intention is for that to be the goal and letting natural social dynamics lead you towards creating an inclusive space.”

“We’re trying to not have all white male homogenous bills,” adds Saxsyndrum’s Nick Schofield, “and we’re very purposefully trying to curate what we put out there to be more representative.”

The group is hoping to grow and welcome new community members as well. “We’re trying to foster that sense of community among people who aren’t involved yet,” says Cruvellier, “people who are just starting to do something here in the city and are looking for an avenue to do that.”

As musicians who have made Montreal their home, many attribute the city’s sense of community as a reason to stay. The collective aims to maintain and strengthen that community with tangible supports such as the skill and knowledge sharing that’s facilitated by organizing together.

As Burton explains, “an organization like this happens because people recognize that they have resources and can share those resources. People don’t necessarily want to create another structure or parallel structure to the various systems we already have, but we realize that more can be done to open things up.”

“We just started giving a name to something that was already happening,” adds Nick Maas of Smokes. “We’re trying to do things in what we believe to be the right way. We’re just here living in Montreal, and we want to be part of a community and have a home here.” ■

To learn more about Oh Hi, check out theirwebsite or their Facebook page.