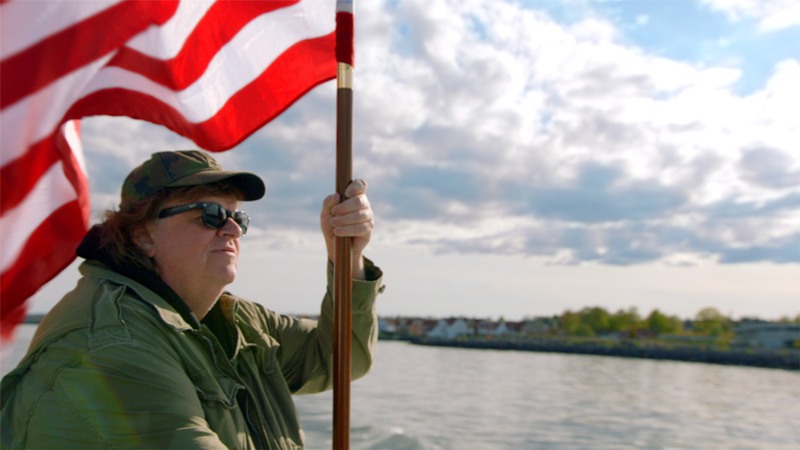 Michael Moore in Where to Invade Next?

Michael Moore faces much the same criticism that many progressive filmmakers do. There’s a lot of bitching and kvetching going on, but little in the way of actual, practical solutions to the big problems that America faces.

Notoriously sensitive to criticism, Moore is clearly answering his critics with Where to Invade Next, a dizzying, frenetic world tour, in which the filmmaker shows us where and how some people are actually being successful in dealing with significant challenges.

Upon seeing some of the promotional material for the film, I had thought this would be a critique of American foreign policy (and I thought much of that had already been said in the brilliant 2005 doc Why We Fight). But Moore cites the various wars America has gotten involved in over the opening credits, doing what he does so well: editing together colliding images of a country constantly at war, both overseas and with itself (included is the famous “I can’t breathe” video, as Eric Garner is put in a chokehold by New York police). As Moore points out, America hasn’t actually won a war since WWII, and thus all that intervention doesn’t seem to have made much sense. That much we expect from Moore.

But then he begins his tour, taking us to Italy to show how profitable companies treat their employees (hint: with benefits, paid vacations, pensions, aka respect); to Finland, to show us schools that actually educate students effectively; Norway, where the prisons are comfortable and emphasize rehabilitation over retribution; Portugal, where there is no war on drugs; Tunisia, the birthplace of the Arab Spring (and arguably its only beneficiary); and finally to Iceland, where women have far better representation in government and business. They all offer some tender and sweet moments, along with Mooresque touches of absurdity (a standout is a video made by Norwegian prison staff, as they sing an American pop song while welcoming prisoners into the institution).

Perhaps most moving is his trek to Germany, where he shows how the Holocaust is taught in schools almost every day; rather than try to forget or erase their past, the Germans realize that they can only avoid repeating history by never forgetting it. (And while Canada doesn’t get an entire segment, have no fear: Quebec’s student Maple Spring uprising gets a cameo.) Each stopover offers some kind of hope or optimism about what can be done about the seemingly unsolvable.

Again, Moore knows he’s going to get hit with the criticism that he’s being overly simplistic, that he’s simply pausing in a country long enough to cherry pick the good stuff while neatly overlooking the bad and the ugly. His response is built in: early on, his voiceover tells us, “I know this country isn’t perfect — no country is — but I’m not here for the weeds, I’m here to pick the flowers.”

Also staving off critics is Moore’s clever punctuation of each sequence. He asks the people behind each program where they got the idea from. Many cite American thinkers, educators or philosophers, or even go right back to the American Constitution. With Where to Invade Next, Moore has managed to be both critical and patriotic at once.

There is a telling moment towards the end of the film, however, when Moore meets up with an old friend by what’s left of the Berlin Wall. He reminisces with his friend about being at the Wall when it was still a functioning barrier between East and West, and the most poignant symbol of the Cold War division. Sometimes, Moore muses, solutions to problems are just so simple and right before us: just pick up a pick and start chipping away at the Wall. “It’s just like gay marriage,” he surmises. “State after state began to legalize it, and now it’s done.”

This is where Moore reveals a side that is mighty — and maddeningly — simplistic. Because I was around for the last part of the Cold War, and worked with peace and no-nuke activist groups in the ’80s and I was also part of the struggle for greater acceptance of LGBTQ people – and neither movement was simple or obvious. Both were incredibly complex and required a combination of agitprop activism, writing in the alternative and mainstream press as well as in academic journals, campus and grassroots organizing, coalition building, government lobbying, peaceful resistance and occasional violent protests, public education campaigns and media blitzes.

It’s something Martin Luther King Jr. realized towards the end of his short life: that fighting for a cause that seemed obvious to him and many in his movement (racial equality) was actually extremely complex, and that racism was very firmly entrenched, both as a system and individual sentiment. It’s an indication of how naive Moore can be that he can refer to the end of the Cold War and greater acceptance of LGBTQ people as obvious things people got over once their insanity was pointed out.

But it’s easy to forgive Moore for his occasionally naive moments. Where to Invade Next is a beautiful film, and in its own way, it’s as radical as it is profound. After all, when the default position is utter cynicism, there’s something refreshing about a feature-length tribute to hope, optimism and solutions.

For any and all criticism, Moore is undoubtedly right about one thing: sometimes we just need flowers. And I’m pretty sure most of us can agree this would be one of those times. ■

Where to Invade Next opens in theatres on Friday, Feb. 26. Watch the trailer here: