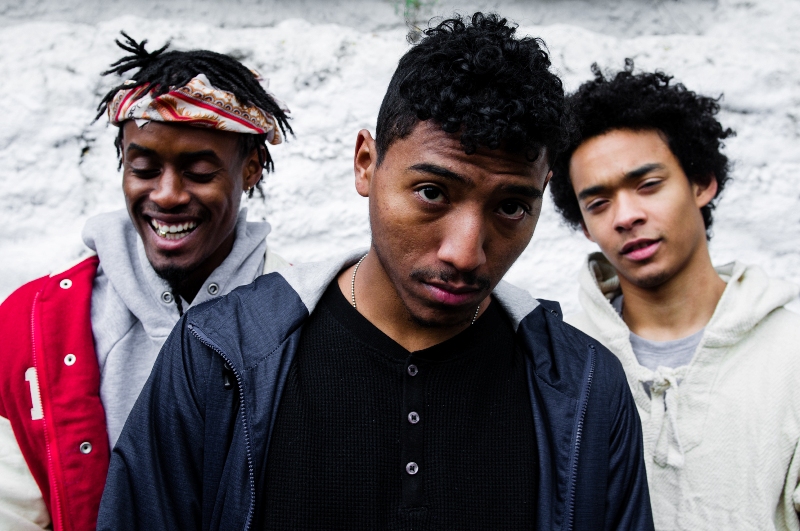 Montreal hip hop trio the Posterz — that’s mic controllers Husser and Kris the $pirit and producer/composer Joey Sherrett — are in the sweet spot right now. The buzz around them has been building solidly over the course of about two years. They feel new, sound fresh, and from the look of things, have every reason to be looking forward to their future in music.

It helps that their tendency from the jump has been to go large. From the moment their first EP Starships and Dark Tints dropped, the Posterz have been up.

“(Our first show) was opening for Machine Gun Kelly,” Joey recalls. “We practised a little bit (before), but we only did like three songs. Our first (full) show was at M for Montreal, at Divan Orange.”

“There was a decent turnout, too. It was a MEG thing,” adds Husser. “It was a mix of (M for Montreal) delegates, some friends and a lot of new people, actually. People off the buzz.”

Another memorable early moment for the band happened in June 2014, during Mural fest, opening for A$AP Yams and Flatbush Zombies at the Osheaga Block Party.

I ask if they had the chance to meet Yams, the late hip hop visionary behind A$AP Mob and its most notable stars, Rocky and Ferg.

“They usually don’t like to let us meet people,” Husser deadpans. But the truth is the Posterz are professional enough to have made more waves locally in two short years than many established talents a decade deep in the game.

“When we create, we create with the Earth in mind, not just like, the Montreal market. We just create for hip hop — and not even hip hop, just music on Earth,” Joey philosophizes. “We listen to everything, and we try to make our shit really, really good. I think we can compete with the States, we just need the structure to get it out to the people.”

A brand new Posterz EP, Junga, backs up that pledge, standing as one of the year’s finest local releases in any genre and catching steady plays and downloads from the U.S. and France. Husser’s new solo single “Name Another N!99@” featuring Ragers (another local crew on the rise) caught a video tweet from XXL when it dropped late last month. And a fresh Posterz visual, “Want It All,” drops this week.

The youthful trio blend confident ambition with natural, individual, creative instincts to make their force as a combo engage on headphones, entertain in video and elevate in concert. A Posterz show of any size, shape or form is, without hyperbole, a transcendental live experience.

The band takes full command of any assigned environment with an ease in demeanour seldom seen on the hip hop stage.

A concrete room becomes a flag-waving battleship; kiosk tents on a roof, shaken by their legs, turn a patio BBQ into an earthquake. Most recently, the band debuted a live set collab with Ragers, an excellent clash of aesthetics and theatrics deserving many encore performances.

“(The Ragers) messaged me last year on Facebook wanting to jam,” Husser says, “and at the time we weren’t really doing much, like, jams or features. We just wanted to focus on finishing up our shit. Then finally, we got back to them. Did one jam, like one track with ’em, the ‘Name Another N!99@’ song.

“The chemistry was all good, so then, yo — we should do a show!”

“Be our band!” exclaims Joey.

Every possibility seems fresh. Their energy thrives because they do what feels right. Husser’s EP drops early next year, Kris the $pirit and producer Sherrett both have projects on the go for 2016. And their debut proper, the Junga LP, is on the way.

“The cool thing about the Posterz is that it’s three dudes who are mad individual, so it’s like we’re three solo artists in a group, in a way,” Sherrett reasons. “Some kind of Wu Tang-ish vibe.”

“Like the Power Rangers when they make the fuckin’ big guy,” Husser chuckles.