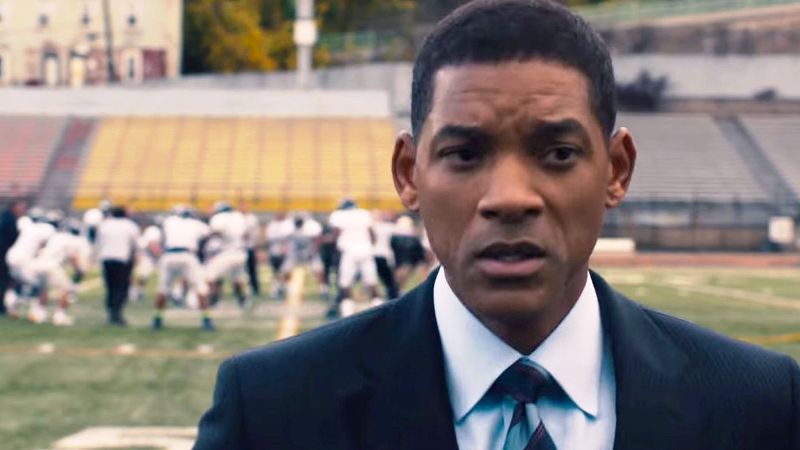 Will Smith in Concussion

Given America’s fascination with both medical dramas and professional football, Peter Landesman’s Concussion seems like a given. It’s a glossy, star-driven vehicle that easily lays out a complicated issue for mass consumption. It would be one thing if Concussion was simply a tear-jerking Lorenzo’s Oil-type medical drama, but Landesman is also making a hard-hitting, sobering exposé of the hypocrisy and corruption of the National Football League AND a personal drama about the struggles of a brilliant, stubborn immigrant trying to make a life for himself and his family in America. Needless to say, it’s a lot for any movie to handle at once.

Dr. Bennet Omalu (Will Smith) works as a medical examiner for the city of Pittsburgh. Deeply religious and singlemindedly focused on his work, Omalu goes above and beyond the call of duty in most of his autopsies, which has made him the personal favourite of Dr. Cyril Wecht (Albert Brooks). When football hero Mike Webster (David Morse) is brought in for an autopsy, most refuse to desecrate his legend by autopsying him. Omalu, unfazed by the almost religious reverence Pittsburgh has for its football heroes, is determined to find what caused a man beloved by all to spend his last weeks huffing glue in a pick-up truck before dying.

Omalu discovers a degenerative disease he names chronic traumatic encephalopathy (CTE), caused by repeated head trauma due to the brutality of NFL hits. Almost everyone denies Omalu’s claims that football is dangerous for your health. It’s not until he teams up with the Steelers former medic (Alec Baldwin) that he even has a chance of having his voice heard in football-loving America.

Concussion is torn between its desire to be a nuts-and-bolts exposé of a controversy that unfolded in a way that eschewed conventional narrative structure and the necessity of delivering a Will Smith movie full of Oscar moments and impassioned speeches. The reality of the work of pathologist isn’t particularly cinematic — any “come look at this!” reveal is followed by a battery of tests and maybe the promise of co-authoring a publication in a medical journal. Nevertheless, Concussion is at its most compelling when it truly gets lost in the thick of it. The film is most interesting when it’s the least comprehensible since we actually feel like a fly on the wall rather than a patient audience being explained things by movie stars. A former journalist, Landesman has an almost obsessive concern with detail that serves the sometimes obtuse topic well.

Where the film falters is in its more conventional aspects. Paralleling the CTE scandal is Omalu’s courtship and marriage to a young Kenyan woman (played by Gugu Mbatha-Raw) he takes in as a boarder on advice of his priest. This is, by all accounts, how Omalu met his wife, but it feels shoehorned into the plot as a way to give the single-minded Omalu a bit more of a human quality. As talented an actress as Mbatha-Raw is, her role seems purely functional. The film also struggles with a nominal villain; while the faceless nature of the NFL makes this a difficult prospect, Concussion nevertheless paints a battery of faceless suits (some of which have been cast with recognizable faces like Paul Reiser and Luke Wilson, a gamble that is more distracting than memorable) in simplistic terms that cheapen the overall tone of the film.

As someone who does not really give two shits about the NFL, I was surprised how compelling Concussion proved to be. While he doesn’t completely disappear in the role, Smith is an engaging presence and his Nigerian accent is actually fairly convincing. It manages to give a fairly even-keeled argument from both sides (though the NFL definitely comes out on the losing end — stunningly, they agreed to lend their logo and likeness to a film that essentially ends up vilifying them!) and brings to light some important issues about professional sports. But exactly as in Spotlight, the story gains very little from being dramatized. A book or documentary (both of which already exist on this topic) would likely do the same thing without the unwavering commitment to familiar tropes. ■